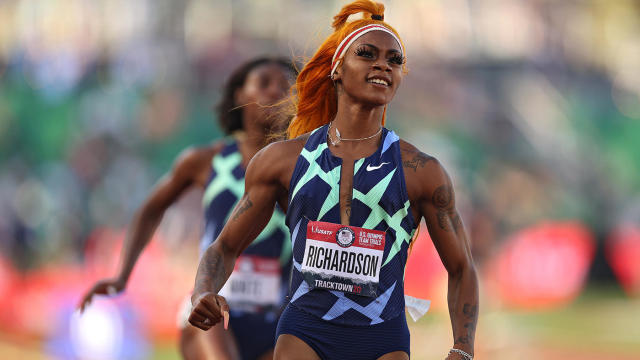 American sprinter Sha’Carri Richardson has reportedly failed a drug test that will result in the U.S. 100-meter champion missing that event at the 2020 Tokyo Olympics. The 21-year-old standout, who was expected to contend for a gold medal, tested positive for what is classified as a substance of abuse, according to the Jamaica Gleaner.

“I want to take responsibility for my actions,” Richardson told NBC on Friday. “I know what I did. I know what I’m supposed to do and am allowed not to do, and I still made that decision. I’m not making an excuse. I’m not looking for any empathy in my case.”

“Don’t judge me, because I am human… I just happen to run a little faster.”
—Sha’Carri Richardsonpic.twitter.com/AOplAWsZsz

“That sent me in a state of mind, in a state of emotional panic, if anything,” she said. “During all that, I still, even though I’m here, I still have to go out and put on a performance for my dream.”

Marijuana is now legal in 19 states thought it remains illegal at the Federal level.  Support for marijuana legalization has become mainstream among Democratic politicians, and some Republicans also back the idea. State legislatures are grappling with if and how to legalize the drug, while several marijuana-related bills – including those aiming to decriminalize it on the federal level – have been introduced in Congress.

The post Sha’Carri Richardson suspended from US Olympic team after testing positive for marijuana appeared first on Black News Alerts.

Tekashi 6ix9ine Refuses to Support His Homeless Dad: ‘My Biological Father Abandoned Me’

Tekashi 6ix9ine is refusing to help support his biological father, Danny Hernandez Sr., despite the homeless 60-year-old’s plea for help. via Page Six: “Everybody knows I was abandoned at birth. Everybody knows that my biological father abandoned me at birth,” the “Gooba” rapper, 25, explained to friend DJ Akademiks Tuesday. “Right now, he’s in a shelter smoking crack. The story of me not giving money to a crackhead who abandoned me at birth is getting more publicity than the positive […]