Yep, A Netflix Movie About The GameStop/AMC Stock Trading Frenzy Is Already In The Works

Well, that was fast! Netflix is already jumping on the GameStop/AMC stock trading drama, readying a new film about the amateur traders who shook up Wall Street. Deets inside…

This upcoming Netflix film about the GameStop & AMC stock trading frenzy is giving us Wolf of Wall Street vibes.

The latest Wall Street developments following the GameStop/AMC stock trading frenzy are still unfolding in real-time. Yet, a movie about social media driven stock market take over is already in the works.

Robinhood – a trading/investing app – pumped the breaks on the plan, restricting traders from buying certain stock on their app, which resulted in customers blasting the company online.

In light of current market volatility, we are restricting transactions for certain securities to position closing only, including $AMC and $GME. Read more here.https://t.co/CdJMjGAeFH

It caused a frenzy in the media and now the storyline is coming to Netflix.

As for the movie…

There’s talk actor Noah Centineo (To All The Boys I’ve Loved Before) is set to star in an upcoming Netflix movie focused on the surge in GameStop and AMC stock. Oscar winner Mark Boal is reportedly in negotiations to write the script. Also, Scott Galloway, activist/journalist/NYU prof/tech issues expert, is in talks to consult on the script.

Netflix declined comment on the Mark Boal project, but sources said the intention is to use the GameStop episode as a specific way to shine a light on the phenomenon of how social media has leveled the playing field and allowed the masses to challenge status quo gatekeepers, for good and bad. The examples range from the stock spike for GameStop, AMC and other formerly lagging stocks that are subject to the short-selling maneuvers of billion-dollar hedge funds, to the social media spread of unfounded election rigging charges conveyed by conservative social media sites and Trump Tweets that fired up right wing extremists to storm the Capitol while President Biden’s election was being certified, leading to the death of five people.

Today, Robinhood released a revised restricted list that shows customers how many shares of each popular stock can be bought at this time. Right now, customers can buy up to 100 shares of GameStop, which is an 80 share increase from the 20 shares the app previously allowed. However, customers will still be limited to what they can buy. Market Insider reports:

Despite the easing restrictions, customers will still be limited in what they can buy. Robinhood says customers won’t be able to open new positions in any of the securities listed unless their account holdings are below the respective limit. Customers also won’t be allowed to buy fractional shares at this time.

Robinhood released a statement to its customers today, reassuring them that they are sticking true to their core values:

We’re witnessing something that the stock market has never quite experienced before. Standing by our Robinhood community means being there for our customers through any trading environment and communicating about the rules our industry faces.https://t.co/MF5mcyIjOX pic.twitter.com/Evve8lYjZj

“It’s a rigged game,” she said. “They’ve turned it “more into a casino,” she continued. Peep the clip above. 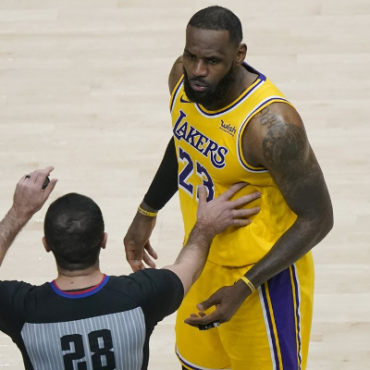 LeBron James Clowns #CourtsideKaren As She Rants Online After Getting Kicked Out Of Game, ‘F*ck You LeBron!’

#CourtsideKaren was cutting up during the Los Angeles Lakers vs. Atlanta Hawks game last night. The woman and her husband heckled LeBron James, causing the NBA star to react. The bizarre exchanged ended with the woman and her husband getting kicked out of the stadium. Bloop. More inside… Limited in-person tickets were allowed for fans to get a front row look at the Los Angeles Lakers go up against the […]