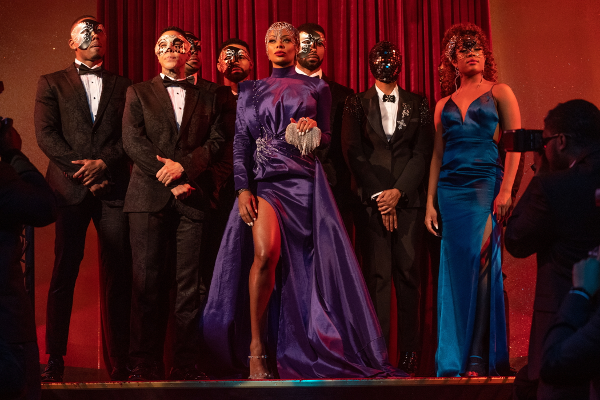 Tyler Perry has a new male exotic dancer drama series in the works with Christian Keyes. And the cast includes former “Real Housewives of Atlanta” star Eva Marcille and this season’s resident stripper BOLO, introduced by Kandi Burruss. Yes, HIM. More inside…

Tyler Perry saw y’all lusting after BOLO The Entertainer on social media after his cameo in this season’s “Real Housewives of Atlanta” when Kandi Burruss brought the Sex Dungeon on their girls trip. The internet chatter was enough to keep BOLO’s name at the front of Tyler’s mind, and now he’s starring in his upcoming exotic dancer series.

BET+ & Tyler Perry are ready to turn up the heat this summer with a sexy new drama titled “All The Queen’s Men,” which is set inside the world of male exotic dancing in Atlanta’s Club Eden, a fictional home to the hottest and most sensual male exotic dancers in the country. Sounds like the male version of “P-Valley.” Right?

The new dancer series is based off fie a– “Saints & Sinners” star Christian Keyes’ book, “Ladies Night.” Keyes will serve as an executive producer and will also star in the series.

The one-hour drama centers around the life of “Marilyn ‘Madam’ DeVille,” played by Eva Marcille. Madam is a fierce businesswoman who is at the top of her game in the nightclub industry and surrounded by a band of trusted employees who are down to make sure that she is successful. But Madam, a self-proclaimed boss, soon discovers that more money and more power means more problems.

Will Madam retain reign as she navigates this dangerous and sexy society? Will the sensuous world of exotic dancing cost Madam her queendom and potentially her life?

Michael ‘BOLO’ Bolwaire has been cast as one of the dancers. Skyh Alvester Black, Candace Maxwell, Raquel Palmer, Keith Swift, Dion Rome, Jeremy Williams and Christian Keyes round out the cast.

Here’s a summary of everyone’s roles (via press release):

EVA MARCILLE as “MADAM (Marilyn Deville)” a savvy, powerful, uncompromising businesswoman who owns a high-class male strip club that she runs fairly but with a firm hand; she’s unafraid to do whatever it is she has to do to keep her business going.

SKYH ALVESTER BLACK as “AMP “ADDICTION ANTHONY”, a dancer with a hidden past who has found difficulty getting hired after being released from prison, so he goes to work as a bouncer/doorman in Madam’s club, Eden.

CANDACE MAXWELL as “DJ DIME” the resident DJ at Club Eden. She is ambitious and looks to Madam as a mentor.

RACQUEL PALMER as “BLUE” Madam’s chief of security. Blue is frequently seen at Madam’s side when things get a little dicey.

MICHAEL ‘BOLO’ BOLWAIRE as “DOC” one of the male strippers at Club Eden. Doc gets along well with his fellow dancers and a little too well with one of Eden’s patrons.

KEITH ’FATAL ATTRACTION’ SWIFT as “BABYFACE”, is the oldest dancer of the group, though he doesn’t look it. He’s questioning the number of days he has left at the club and his many client entanglements cause him plenty of drama.

DION ROME as “EL FUEGO”, one of the dancers at Madam’s Club Eden who is a bit flirtatious with Madam. He loves who he loves and is quite the techy.

JEREMY ‘MASTERPIECE’ WILLIAMS as “MIDNIGHT” a confident and tough male stripper who sparks a different vibe in Madam than the other strippers. She enjoys him though it’s hard to say how personal their relationship is.

CHRISTIAN KEYES as “THE CONCIERGE” is a calmly intense hitman, and member of the Damascus family, hired to blackmail Madam.

“All The Queen’s Men” is one of the first shows from Tyler Perry Studios’ scripted development arm, Pitch Black Development LLC, Headed by the studio’s President of Production & Development, Michelle Sneed. She will also serve as an executive producer.

The exotic dancer drama got the special treatment with an episode order increase by BET+ from eight half-hour episodes to ten one-hour episodes with additional filming set to begin later this month at Tyler Perry Studios.

“All The Queen’s Men” drop this Summer on BET+. In the meantime, check out the first look below and tell us if you’re watching!

Halle Berry scored a mini victory in family court as her child support payments owed to ex-Gabriel Aubry for their 13-year-old daughter, Nahla, has been cut in half! Previously, she was paying him $16,000/month! Deets inside… Over the last few months, Halle Berry has been vocal about her frustrations with having to pay her ex-Gabriel Aubry thousands a dollars a month in child support for their 13-year-old daughter, Nahla Aubrey. By the way, Nahla turned 13 this month. Sources told […]