Woman Who Was Shot Dead After Breaking Into The U.S. Capitol Identified + Her Final Tweet Revealed – ‘Nothing Will Stop Us!’ 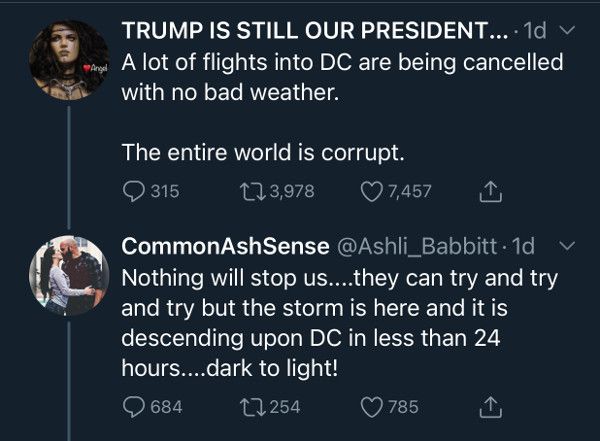 The woman, seemingly part of a group of domestic terrorists, who was shot and killed after breaking into the U.S. Capitol has been identified. The husband of the 14-year USAF veteran turned MAGA insurgent is speaking out. Find out what he said, plus peep her last tweet inside…

BREAKING: Family confirms woman shot & killed at Capitol is Ashli Babbit. She owned a business in San Diego w/ her husband who did not come to DC. “I really dont know why she decided to do this,” her mother-in-law tells me. Police have not confirmed circumstances of shooting pic.twitter.com/OOYpNWpMLg

Four people died in yesterday’s Capitol unrest, one of which was shot and killed in circumstances not yet 100% confirmed. The woman was fatally shot inside of the U.S. Capitol amid a riot.

The woman – who was shot in the chest – has been identified as Ashli Babbit, a 14-year veteran, who reportedly served four tours with the US Air Force and was a high-level security official during her service. Based on her work experience, she should have known better than to break into a federal building.

The 35-year-old is from San Diego and runs a store with her husband, Aaron. He did not accompany her to protest in Washington D.C. He told KUSI she was a “a strong supporter of President Trump” and “a great patriot to all who knew her.” Babbit’s mother-in-law told the TV station, “I really don’t know why she decided to do this.”

“One capitol police officer discharged his service weapon, striking an adult female. She was transported to a local hospital, where after all life-saving efforts failed, she was pronounced deceased,” Chief Contee said Wednesday at a press conference. “The MPD’s internal-affairs division is currently investigating this matter as we investigate all officer-involved deaths in the District of Columbia, including ones from other agencies. This is a tragic incident, and I send my condolences to the victim’s family and friends.”

An investigation into her death is currently being held.

Video of her being shot inside the Capitol surfaced online during the time the #MAGA Mob was wreaking havoc on a federal building. The footage shows her attempting to climb through a broken window where armed officers were waiting on the other side.

Washington DC police chief Robert Contee confirmed that she was shot by a US Capitol police officer and an investigation is under way.

Below are videos of the shooting. WARNING! VIDEOS ARE GRAPHIC:

A Twitter account believed to be Ashli’s was found. In one of her last tweets, she said she and the #MAGA mob would NOT be stopped.

“Nothing will stop us,” she tweeted in response to a tweet about flights to D.C. being canceled. “They can try and try and try but the storm is here and it is descending upon DC in less than 24 hours…dark to light!,” she wrote.

The Twitter account has tons of retweets of conspiracy theories and numerous threats of violence. Ashli was a proud Trump supporter:

Other Trump supporters have ironically been coming to her defense on social media.

WE WANT JUSTICE FOR THE MURDER OF
Ashli Babbitt, A Air Force veteran pic.twitter.com/R4X6U4kG0x

All the “lefties” defending this are no better than trump supporters/proud boys. She was unarmed & had armed police right behind her. The police could have detained/arrested her without firing a single shot. This was murder.

He needs to be arrested.

There was no reason to shoot her, since she had police right behind her.

This is absolutely murder! She didnt pose threat to anyone

Ashli was literally breaking through a window of a door that was barricaded to keep the mob from coming inside and potentially injuring a Congressman or Congresswoman. She could have had a gun or weapon on her. If this isn’t a text book example of justified deadly force we’re not sure what is.

Three other people died in “medical emergencies” during the failed coup attempt. 52 people were reportedly arrested and at least 14 police officers were injured.

“As of 9:30 [p.m.] today, we have made an excess of 52 arrests: four arrests for carrying pistols without licenses, one arrest for possession of prohibited weapon, 47 arrests related to curfew violations and unlawful entry,” he said. “Twenty-six of these 52 arrests were made on U.S. Capitol ground. This number in addition to the 10 arrests that occurred yesterday are the arrests that the Metropolitan Police Department has reported thus far,” he continued, noting that “these numbers are preliminary and will be updated accordingly.”

After confirming the death of Ashli Babbit, more details about the other people who died was released:

“Additionally, there were three other deaths reported today from the area around the Capitol grounds,” he continued. “One of adult female and two adult males appear to have suffered from separate medical emergencies which resulted in their deaths. Any loss of life in the District is tragic, and our thoughts are with anyone impacted by their loss.”

It’s officially official! Congress affirms President-elect Joe Biden’s 2020 election victory after MAGA thugs stormed the U.S. Capitol to delay the proceedings. Nice try. More inside… To say yesterday was an interesting day would be an understatement. But despite that violent failed coup attempt at the U.S. Capitol, Congress finished what they started so the nation can accept its next commander-in-chief. Around 4AM this morning, Congress certified President-elect Joe Biden and Vice President-elect Kamala Harris’ victory after a long day […]