Wendy Williams is spilling some personal tea before the premiere of her biopic. Apparently, the daytime talk show host got it IN with rapper Method Man back in the day. Oh? Viewers will not see the hookup in her upcoming LIFETIME biopic and she explains why inside…

Wendy Williams has been cutting up in the days leading up to the premiere of her LIFETIME biopic, Wendy Williams: The Movie. And she’s continuing to stir the pot.

While hot on the promo trail for her new film, the outspoken daytime talk show host revealed rapper Method Man stretched her out in the bedroom “back in the coke days,” referencing a time in her life when she was heavily using drugs in the 90s.

”I was an eight ball girl by myself,” the 56-year-old daytime talk show host said during an interview with DJ Suss One. “I smoked a blunt with Redman – excuse me – with Method Man while I gave him a bath and it was a one-night stand.”

Come again, Wendy? She kept confusing Method Man for Redman, but to set the record straight, yes she was talking about Wu-Tang rapper Method Man, whom she dubbed “the leader of the biggest group in the world.” Sounds like sis was star stuck back then.

The TV personality said she met the NYC rapper at a club when he approached her.

“I smelled the weed and I had weed but he had better … He rolled a blunt, we smoked a blunt, we watched the fight, we heard the gunshots, the cops came in. … I guess I batted my eyes and rocked my shoulders and I said, ‘You wanna come over?’ And he said, ‘Yeah, I’ll follow you.’”

“He’ll deny it. Maybe not,” she continued.

After the club, they were able to sneak out without anyone noticing them. They went back to Wendy’s Jersey City penthouse where Wendy gave him a bath in her jacuzzi. When DJ Suss One asked if they went all the way, she replied, “Yes!”

“That was back in the coke days,” she continued, “I don’t remember what he did, I’m not gonna implicate him on that.”

You would think tea this HOT would go in her upcoming biopic, but nope.

DJ Suss One noted her alleged one-night stand wasn’t included in the biopic (he saw the screener).

”It’s wasn’t in the movie because Redman, uh excuse me, Method Man is still very angry at me,” Wendy responded.

She didn’t specify why, but it’s likely due to her speaking out on their past bedroom antics. Allegedly.

We’re not sure if this is the sole reason why Method Man is upset with her because she’s just spilling this one-night stand tea. In the early 2000s, there was bad blood between Wendy and Method Man because she revealed his wife – Tamika Smith – had cancer. Apparently, she was keeping the diagnosis a secret from her family.

Chile….who knew?! By the way, this alleged sexcapade went down before Wendy married her ex-husband, Kevin Hunter Sr.

Watch Wendy dish on her sex life in the 90’s (starting at the 26-minute mark) below:

“The f*ck kinda weed made you do that blood,” Fif wrote in the caption of a picture of Wendy on the beach. “LOL. OH NO WHAT THE F*CK GOING ON.”

Fif then shared a clip of Wendy’s interview, cracking jokes at Method Man. Singer Erykah Badu joined in on the mini roast:

This guy stays commenting on business that doesn’t concern him. 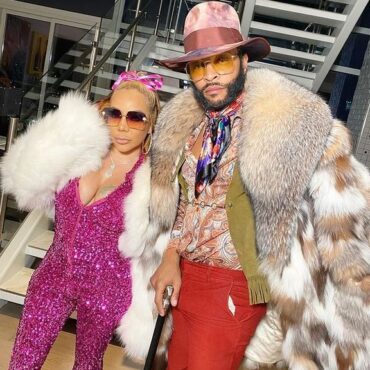