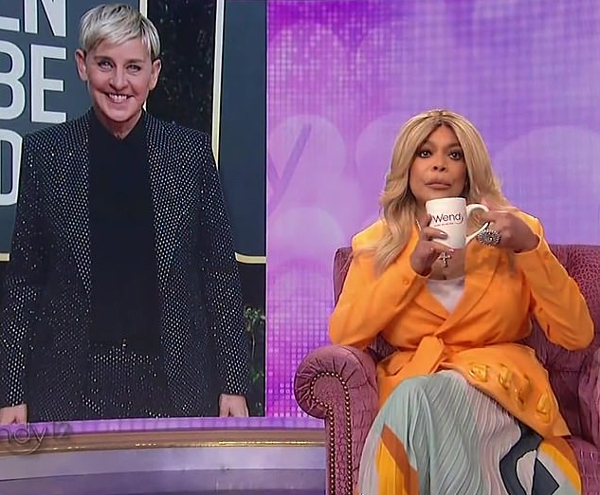 Leave it to Wendy Williams to say what’s really on people’s minds.

It sounds like the daytime talk show host has the inside scoop on what it’s REALLY like behind-the-scenes at “The Ellen DeGeneres Show.”

Back in August, celebs like Kevin Hart and Tyrese hopped on social media to defend Ellen after she was accused by former and current employees of creating a “toxic work environment,” which has launched a storm of controversy.

Sitting in front of her audience comprised of her staff, Wendy kicked off her Hot Topics segment with the story about Ellen ending her daytime talk show after its 19th season. In Ellen’s farewell message, she mentioned being on television for almost two decades changed her life.

The controversial talk show said being on TV 19 years “doesn’t change your life, it exposes you for the person that you really are.”

Wendy played clips of Ellen speaking to Savannah Gutherie about the allegations made against her. She said she felt the controversy was “too orchestrated” and that she wished someone would have came to her and alerted her about what was going on.

”All I’ve ever heard from every guest that comes on the show is what a happy atmosphere this is,” Ellen said.

”I’m not sure that all the guests are happy. I was a guest. I wasn’t happy,” Wendy said after airing Ellen’s clip.

Although Ellen said she knew the show’s 19th season would be her last, Wendy isn’t buying it.

”I don’t know whether she told her current staff, though,” she continued. “She seems like the type of person that would come out onstage and announce it to everybody and people are looking at the TV as she’s saying it like: ‘Wai-wha-wait, what just happened?’”

Peep the clip below (starting at the 2-minute mark):

One current and several former employees of “The Ellen DeGeneres Show” anonymously came forward to expose what’s been going down on the set of the “ELLEN” show. The individuals spoke to Buzzfeed News on the condition of anonymity out of fear of retribution.

The self-proclaimed Queen of Rap is back! Nicki Minaj hopped on social media last night to announce the re-release of her “Beam Me Up Scotty” mixtape on the project’s 12th anniversary. Drake dropped in on her IG Live to announce their new track. Also, that pink ICON hat she wore recently sold out. More inside…           View this post on Instagram                       A post shared by […]