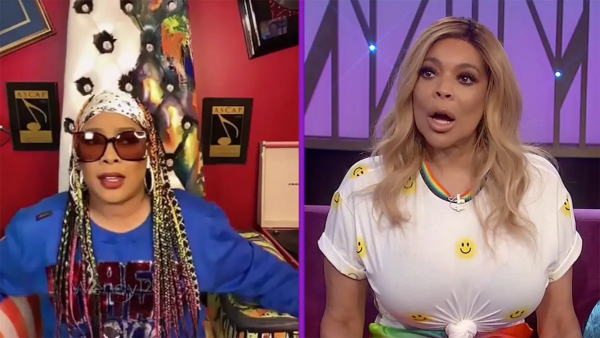 Wendy Williams has been cutting up on her daytime talk show lately. Watch how Da Brat shut down Wendy when she dished the rapper tried to holla at her, plus the “death wish” she placed on Britney Spears‘ parents following her testimony to end her conservatorship.

Wendy Williams has been extra opinionated lately, saying the first thing that comes to her mind on her daytime talk show. And now she’s in more drama. As you know, the 56-year-old talk show host loves to ask the burning questions other hosts wouldn’t normally ask. And she’s also one to spill tea she gathers amongst her celeb friends behind-the-scenes.

During the “Hot Topics” segment (before the interview), Wendy suggested Da Brat hit on her in a text message.

“The last time we talked and I texted you, it was after I saw your documentary [LIFETIME biopic “Wendy Williams: The Movie”], and I felt like you ain’t got no real friends and I wanted to be your friend, so I called to check on you,” Da Brat said.

“No, you said more than that,” Wendy chimed in.

“Well okay, if I was gay would you like me?,” Wendy asked.

“Nope,” Brat said while shaking her head “No.”

Brat said she’s fly, but Wendy is NOT for her. She also said she already has her “forever” already and she would never disrespect her like that.

Later, Wendy mentioned her constant speculation over Da Brat’s sexuality was useful in her process of “coming out.”

“Girl, you were never part of my process, not until I was ready to reveal anything did anybody know anything, and when I did it, that’s when I let the world know,” Da Brat replied. “Back in the day it wasn’t cool. You couldn’t do that. Ellen [DeGeneres] lost her job, her show. Back in the day you could not do that, but thank God it’s different now. And I get to live out loud and live in my truth.”

Peep their banter below:

Before Wendy’s interview with Da Brat…

During her “Hot Topics” segment a day before, Wendy talked about Britney Spears‘ day in court to fight over her conservatorship. Britney told a LA Superior Court judge that her conservators – including her father Jamie Spears – forced her into rehab, forced her to take lithium and blocked her from removing an IUD.

“How dare you, Mr. Spears. You had me fooled. And you too, Mrs. Spears,” Wendy said while talking about Britney’s testimony. “Death to all of them,” she continued, which promoted gasps from the audience. The part where Wendy says “death to all of them” has been edited out of the full episode on the official “Wendy Williams Show” YouTube account (above). However, the clip is still on social media. Check it out below:

WENDY SAID THAT ON NATIONAL TELEVISION. MY GOD pic.twitter.com/TgBRtgPYjR

Several YBF celebs spoke out to show Britney support, including Keke Palmer. Her first post was deleted by Instagram due to copyright (above), but she put up another post, which you can check out below:

We love you Britney!!! Stay strong

We love you SO MUCH @britneyspears

Mary J. Blige is a walking testament of what can happen when you never give up. The legendary singer gives fans an inside look at the making of her sophomore album, My Life, which launched an unbreakable bond between the singer and her fans. More inside... Over the past 30 years, Mary J. Blige has fed our souls with heartfelt tracks that serve as part of the soundtracks of our lives. Her chart-topping hits brought us joy, pain and every […]