Wendy Osefo Continues to Feud with Newcomer Mia Thornton on ‘The Real Housewives of Potomac’: ‘You Don’t Even Go Here’

Dr. Wendy Osefo and Mia Thornton are still not seeing eye-to-eye on ‘The Real Housewives of Potomac.’

During Sunday’s episode of the Bravo reality series, Wendy, 37, and Mia — the newest member of the RHOP cast — rehash their fight from Karen Huger’s house last week, when Wendy accused Mia of being hypocritical about her stance on Gizelle Bryant and Mia put her hand in Wendy’s face, causing the disagreement to heat up.

“I talk with my hands, sorry, you got to get used to it,” Mia, 36, told Wendy during a group spa day in the most recent episode. “You can’t tell me how to act this is my demeanor, if you don’t like it you can sit over there.”

“I didn’t come for you at Karen’s house because I respect people’s houses, but today I have time,” Wendy replied. “I am Zen Wen, so do not try to come for me because what I do have, and what I will always have, is time. So tick-tock, Mia.”

Mia then explained the drama to Gizelle, 50, who was not present at Karen’s house the first time.

“She was basically saying that I was coming off as being shady because I was uplifting you at the table,” Mia told Gizelle, who replied, “I love the fact that you’re trying to get to know all of us.”

“I’m just being Mia,” she said. “I will forever be transparent.”

Wendy, however, continued to call Mia out for contradicting herself.  “Your issue is not with me, your issue is with yourself, because every 10 seconds you put your foot in your mouth,” Wendy said.

“Clearly she’s unhappy at home,” Mia then told the others.

“No, sweetie — you’re unhappy at home. That’s why you need your c— fixed,” Wendy said, referencing the plastic surgery Mia previously opened up about having.

“I don’t have time for small-minded people,” Mia responded.

“No, but you were dismissed, goodbye. You’re dismissed,” Wendy concluded as Mia walked out of the room.

Once she left, Gizelle advised Wendy to slow it down a bit and let Mia speak.

“I don’t ever mind you going hard in the paint, but you got to let the other person talk,” Gizelle said, prompting Wendy to feel betrayed.

“My response to Mia is because I was defending Gizelle, so I guess loyalty is a one-sided thing in the book of Gizelle and Robyn because they’re not showing any loyalty to me,” Wendy said in a confessional.

In one of the treatment rooms at the spa, Karen, 58, chimed in on the drama with a dig at Gizelle, who organized the day in honor of pregnant costar Ashley Darby.

“This is supposed to be a celebration for Ashley’s baby, but Satan is throwing the party so, this is what happens,” Karen quipped to Mia.

Elsewhere in the spa, Candiace Dillard tried to talk to Wendy about what happened.

“I don’t want Mia to feel like she can push your buttons,” Candiace, 34, said.

“She can’t. I’m not giving her anything. I’m literally in a good place,” Wendy said.

“I hate that Wendy feels like she needs to pump her chest up in front of Mia,” Candiace added in her confessional. “Girl, sit back, your boobs are too new to be doing too much. She gon’ pop a t—-.”

Earlier in the episode, Mia revealed more about her backstory, sharing that she is trying to repair her relationship with her mom.

“Obviously, she’s my mom, she gave me life. She brought me into this world, and that’s just as far as I can get,” she told husband Gordon.

“My mom and dad had a drug issue,” Mia explained to the cameras. “I ended up in foster care. And my mom, I would hear about her going into rehab, but it was hard for me to get in contact with her for about six years.”

She continued, “I think she was very embarrassed by losing me that I would write her but I would never hear back from her. Or if she was writing me back, the message wasn’t getting to me.”

“I remember, Christmas Eve, laying on the cold floor waiting for her, and she never came,” Mia then tearfully recalled to her husband. “I was like, six, and I think that’s when I realized that I didn’t have a mom.”

Later, she opened up about a more lighthearted piece of her past — meeting her husband while bartending, and later stripping at a “gentlemen’s club.”

“Shortly after serving drinks, yes I did become a stripper and that’s when I met him,” she told her new costars at the spa.

“No shame in it,” Karen told the cameras. “Actually, I was thinking about getting a pole. I’m thinking a retractable pole to put in the bedroom, and I can invite Mia over and can show me how to do it.”

If you ask us, Wendy’s reads seemed a little…rehearsed. ‘The Real Housewives of Potomac’ airs Sundays at 8 p.m. ET on Bravo.

The post Wendy Osefo Continues to Feud with Newcomer Mia Thornton on ‘The Real Housewives of Potomac’: ‘You Don’t Even Go Here’ appeared first on LOVEBSCOTT. 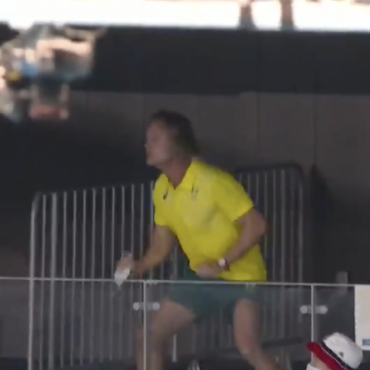 First-time Olympian Ariarne Titmus won a gold medal at the Tokyo Olympics and her coach, Dean Boxall, couldn’t contain his excitement. via People: On Monday, Australian swimmer Titmus upset American Katie Ledecky in the women’s 400m freestyle at the Tokyo Aquatics Centre during the Summer Games. Titmus, 20, was seen smiling and in shock as she looked at the screen to look at her time and first-place finish. Meanwhile, in […]