WATCH: Fans Are Finally Getting A Mary J. Blige Documentary + The Queen Of Hip Hop Soul Inducted Into Apollo Theater’s Walk of Fame

Mary J. Blige fans get excited! A new documentary about the Queen of Hip Hop Soul is coming down the pipeline. The trailer was released right after she announced the documentary would be premiering soon during her induction into the Apollo Theater’s Walk of Fame. Everything inside…

A documentary about the Queen of Hip Hop Soul is coming and we’re already here for it.

While being inducted in the Apollo Theater’s Walk of Fame, Mary J. Blige announced her new documentary , “Mary J. Blige: My Life,” is coming to Amazon Prime Video on June 25th. “My Life” will follow the songstress during the recording of her sophomore album, My Life, which was released in 1994.

In the trailer for the doc, the legendary singer opened up about a low point in her life where she no longer wanted to live.

“‘My Life’ is probably my darkest album at one of the darkest times I’ve had,” the 50-year-old singer said. “Most of the time I was just depressed and didn’t want to live. I had it all inside and I was able to sing it and write it, and I didn’t know that so many people felt the same way.”

Growing up in the Bronx, she knew she wanted to get out and her pen helped her to do just that.

“The only thing, I think, that kept us guided was the music. It just saved you. In the neighborhood we lived in, it’s like prison. There was a lot wrong, and it was a lot. I needed to get out. That’s why I had that pen,” the nine-time Grammy Award winner said.

Several of Mary’s celeb friends, including Taraji P. Henson, Diddy, and Alicia Keys will appear in the documentary. Mary co-executive produced the doc alongside Diddy, and Quincy Jones served as the executive music producer.

Watch the trailer below:

The iconic songstress was inducted into the historic Apollo Theater’s Walk of Fame recently. The Queen of Hip Hop Soul – who celebrated her 50th birthday back in January – looked GOOD AF in a green sequin zebra print jumpsuit. She’s the youngest living person to be honored by the theater, joining the like of Aretha Franklin, James Brown, Stevie Wonder and Little Richard.

More from her induction below:

If you haven’t heard, former Death Row Records affiliate Danny Boy recently made claims that MJB had sex with him when he was a minor back in the 90s. He claims he was 15/16 years-old when he had sex with the R&B songstress.

However, a YouTuber read his book and broke down how his story has changed multiple times since he came out with the alleged claims. He may have been of age, actually. And she came with receipts. Watch it above. 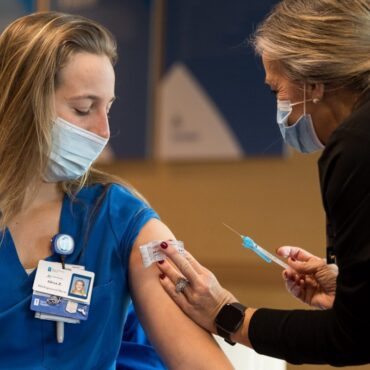 25 million doses of the COVID-19 vaccine will be sent across the globe in the beginning stages of President Biden’s pledge to distribute 80 million overseas by the end of June. What We Know: Vaccines will be distributed through the U.N.-backed COVAX program. First priority is going to Latin America, the Caribbean, South and Southeast Asia, and Africa. Doses will also be delivered to India, Gaza, Mexico, and Canada in […]