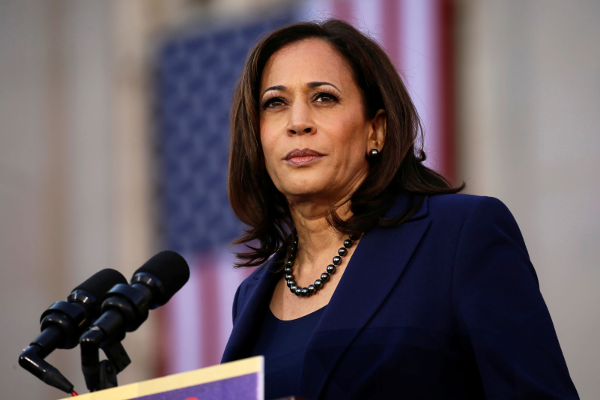 Vice President elect-Kamala Harris graces the newest cover of VOGUE magazine. However, folks aren’t pleased with it. And with good reason. More inside…

Over the weekend, it was officially confirmed President-elect Joe Biden and Vice President-elect Kamala Harris won the 2020 election after the Electoral College votes were tallied. The official announcement came after Trump supporters’ violent attack against the U.S. Capitol, but Congress made sure to not let a group of mindless, domestic terrorists stop them from the transition of power. Thankfully.

To celebrate, VOGUE magazine released their February 2021 cover star and it was none other than our history making Vice President-elect Kamala Harris. Lit, right? Yep. However, the cover. Yeah, folks were NOT feeling it.

The cover (that will get printed) features VP-elect Harris standing in front of a pink and green background in a black blazer and skinny pants paired with Converse Chuck Taylor sneakers (which she sometimes wore on the campaign trail) and her trademark AKA pearls (above). The pink and green background was a subtle tribute to the Howard University alum’s beloved Alpha Kappa Alpha Sorority, Inc.

The editorial was captured by Tyler Mitchell, who became the first Black photographer to shoot a Vogue cover when his subject was Beyoncé.

“I grew up from a young age deeply understanding the rich history of these sororities and their significance,” Tyler Mitchell told VOGUE about the concept of the shoot. “With this cover shoot with Madam Vice President-elect Harris, I wanted the set design to pay homage to that history, her status as an AKA, and Black sororities and sisterhoods worldwide.”

You can read more here.

Social media users are NOT feeling the cover. At all.

”This photo better NOT the cover!!!!!!,” user @knappyhair wrote.

“For the First Female Vice President of the United States, I expect more on the cover of Vogue,” @ dream_journey_jenkins wrote.

”This looks like a photo I would’ve taken in 9th grade this is terrible,” @champagnemaia said.

They have a point.

There’s another photo of Kamala for VOGUE in a powder blue suit that some people felt was more “presidential” than the photo chosen for the printed cover:

According to Kamala’s team, the image chosen for the VOGUE cover was not the image both sides had agreed upon. Harris’ team said they were blindsided by the cover because they thought the image of Kamala in the powder blue suit would be the cover. THR reports:

Harris’ team was unaware that the cover photo had been switched until images leaked late Saturday, according to a person involved in the negotiations over how Harris would be featured on the cover. Harris’ office declined comment and the person spoke Sunday on condition of anonymity.

“The team at Vogue loved the images Tyler Mitchell shot and felt the more informal image captured Vice President-elect Harris’ authentic, approachable nature, which we feel is one of the Biden/Harris administration. To respond to the seriousness of this moment in history, and the role she has to play leading our country forwards, we’re celebrating both images of her as covers digitally.”

Now, VOGUE (*ahem* Anna Wintour *ahem*) knows good and well had this been a white, female VP they would not have picked an image of her in sneakers. Just sayin’.

Elaine Welteroth, former editor-in-chief of Teen Vogue and current co-host of “The Talk” says this is what VOGUE is known to do.

She weighed in on the Vogue cover controversy on today’s show saying:

“I understand that there was a disconnect between the intention and the impact. The intention was to let this new era with a new administration that brings new energy and youthful energy and accessible energy. That was the intention behind the imagery. And they tapped a young black photographer to carry that out. He brought a youthful energy to this shoot. That’s not wrong.” Here’s why the intention didn’t match the impact. There is a larger, cultural context here. Vogue has a history of not representing Black women in the best light, literally and figuratively. So there isn’t an innate trust within this community.”

Welteroth adds, “The problem is, what we’ve come to expect from a Vogue cover when they’re covering a presidential person is regal, elevated, sophistication…I think this was Vogue’s attempt at refreshing, modernizing, staying with the times, but I think Black folks haven’t seen ourselves like this on the cover…And I think a lot of people go, Vogue, they didn’t get it here.”

Regardless of the drama, VP-elect Harris looked amazing in both photos. You can read her cover story here.

#SoHoKaren Miya Ponsetto Doesn’t Feel Like She Committed Crime Because She’s ‘Just As A Kid At Heart As He Is’, TRIED IT With Gayle King

#SoHoKaren Miya Ponsetto speaks out after she physically attacked a the 14-year-old son of jazz musician Keyon Harrold Sr. in a hotel lobby because she thought he stole her iPhone. Miya served up a half-assed apology that Keyon Sr. & his wife aren’t accepting. More inside… Miya Ponsetto is the definition of SPOILED & PRIVILEGED. The 22-year-old woman caught on camera physically tackling a Black teenager in a New York hotel was arraigned over the weekend: Miya Ponsetto was officially […]