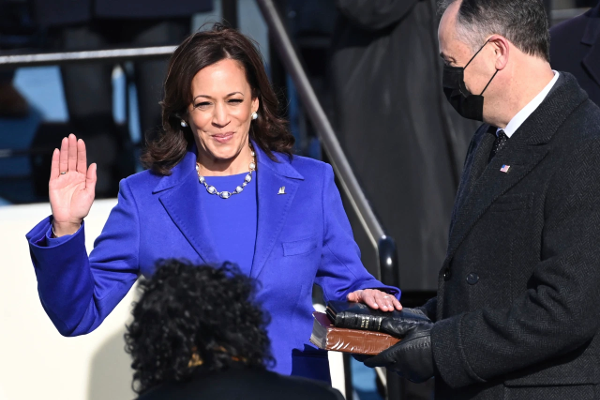 VOGUE heard what you all said about Vice President Kamala Harris’ cover, so they’re trying to make it right. The fashion bible will publish an alternate cover of its February issue with the image of Kamala everyone loved after receiving backlash for the original. More inside…

The original cover (that was printed) features Madame VP Harris standing in front of a pink and green background in a black blazer and skinny pants paired with Converse Chuck Taylor sneakers (which she sometimes wore on the campaign trail) and her trademark AKA pearls (above).

However, people weren’t feeling it. Critics of the cover felt the dressed down version of Kamala was “disrespectful” and that the cover was too “casual” for the Vice President of the United States. The digital version of the cover featured Kamala in a powder blue suit and people felt that image was more “presidential” than the photo chosen for the printed cover.

Turns out, Kamala was blindsided by the printed cover. According to Kamala’s team, the image chosen for the VOGUE cover was not the image both sides had agreed upon. Harris’ team said they were blindsided by the cover because they thought the image of Kamala in the powder blue suit would be the cover. By the way, the editorial was captured by Tyler Mitchell, who became the first Black photographer to shoot a Vogue cover when his subject was Beyoncé.

In a statement to The New York Times, Wintour said that there was “no formal agreement” about the cover choice, but emphasized that “it was absolutely not our intention to in any way diminish the importance of the Vice President-elect’s incredible victory.”

According to Wintour, the magazine’s creative team felt that the casual look was the better choice for the current moment, making a connection to the pandemic and tumultuous state of the country. She did not comment on the lighting of the image.

“When the two images arrived at Vogue, all of us felt very, very strongly that the less formal portrait of the Vice President-elect really reflected the moment that we were living in,” she said in the statement. “We are in the midst…of the most appalling pandemic that is taking lives by the minute, and we felt to reflect this tragic moment in global history, a much less formal picture, something that was very, very accessible, and approachable, and really reflected the hallmark of the Biden-Harris campaign…”

Now, VOGUE will release special edition inaugural issues featuring Kamala in the powder blue suit. The new cover will not appear on newsstands, but a printer version will be available for purchase the VOGUE’s website.

“In recognition of the enormous interest in the digital cover, and in celebration of this historic moment, we will be publishing a limited number of special edition inaugural issues,” said Vogue on their website.

We’ll throw our coins at this one.

John Legend got behind his piano and delivered some “feel good” vibes during his performance during Joe Biden and Kamala Harris’ inauguration special. Watch the EGOT’s performance, plus deets on his wife Chrissy Teigen scoring a follow from Biden inside… Joe Biden and Kamala Harris were sworn in as President and Vice President of the United States yesterday, launching a peaceful era across the nation. After the day’s festivities, Biden’s “Celebrating America” inauguration primetime special aired, hosted by Tom Hanks, […]