Issa Rae and Lauren London had beef? Who knew? The bomb Black creative talks about how Nipsey Hussle stepped in so she and Lauren could hash out their differences in the cover story for Vanity Fair magazine’s June 2021 issue. More inside…

Issa Rae is back to shaking things up on the magazine circuit.

Photographed by Adrienne Raquel, the “Insecure” co-creator flexed in designer threads like Robert Wun, Saint Laurent by Anthony Vaccarello, Valentino Haute Couture, and Givenchy for the cover and spread of Vanity Fair’s June 2021 issue. Per usual, she looked AH-mazing.

That cream Givenchy suit is EVERYTHING!

Inside, she talked about no longer making vision boards, rebooting “Project Greenlight,” and her thoughts about her hit HBO series “Insecure” ending.

But, that wasn’t all she dished on. The “Insecure” star/producer revealed she and Lauren London had beef a few years ago. Who knew?! So here’s what happened.

In Issa’s memoir and in interviews, she shared the story of a TV executive who suggested that Lauren London, an actor who got her start playing the love interest in a spate of music videos and in films like the drama ATL, would be a great fit for a cable version of Issa’s “Awkward Black Girl.” The ATL actress took offense to the anecdote. Before Nipsey Hussle’s untimely death, he was able to chop it up with Issa and his girlfriend Lauren about hashing out their issues and getting over the superficial BS.

The moral of the story was not only that executives were out of touch with Black women, swapping one for another even when they were nothing alike, but also that dark-skinned Black women could be edited out of their own narratives. In a twist that Rae didn’t anticipate, the anecdote hurt London’s feelings. “One of my biggest regrets, naming her,” she says. “She took offense to that,”

The duo made peace at Diddy’s birthday party two years ago, Rae says, spurred by London’s partner, the late Nipsey Hussle. The rapper approached Rae at the party and encouraged her to make things right. “He was like, ‘You should just talk to her. Let me set it up,’ ” she says. “It actually sparked an amazing two-hour conversation. We had so much in common. She was like, ‘People don’t understand, I’m an awkward Black girl.’ In the same way that I was upset about the limited portrayal of Black women, she was like, ‘People do the same thing to me.’ I completely get that.” The conversation burrowed itself in Rae’s brain. With Insecure, she has actively expanded the scope of characters that Black women can relate to—and that mission will continue to guide her.

Recently, Issa inked a new five-year overall deal WarnerMedia. It was reported she received a 8-figure payout, but she claims the reports of the amount are untrue (we wouldn’t be surprised if it was in the ballpark though). You can catch up HERE.

Now, news about her new projects are trickling in.

HBO Max ordered a reality show titled “Sweet Life: Los Angeles,” which will be about young, black life in South Los Angeles. It’s described as a “Laguna Beach”/”The Hills” type of series about Black 20-somethings living in L.A.’s Baldwin Hills. Turns out, Issa loved the 2007 BET series “Baldwin Hills” and said the show inspired her new series. (FYI – One of the managers at ColorCreative, Rae’s initiative promoting inclusion in TV, was a former cast member of the series.)

The LA native is also set to reboot the docuseries Project Greenlight for HBO Max, more than six years after it last season aired on HBO.

Alongside Adam McKay, Rae is also producing an adaptation of Nice White Parents, a quietly infuriating podcast about a public school in Brooklyn. She’s writing, producing, and starring in Perfect Strangers, based on the Italian dramedy Perfutti sconosciuti, about a group of friends learning each other’s darkest secrets during a chaotic dinner party. And then there’s the second season of A Black Lady Sketch Show, the Emmy-nominated series that Rae executive produces.

Years ago, Twitter became obsessed with a photo of Rihanna and Lupita Nyong’o sitting side by side at a Miu Miu fashion show, the former in espionage-grade shades and a furry yellow and black coat, the latter in a crisp collared shirt and thick glasses. Users called for Ava DuVernay to direct a film based on the shot, with a script by Rae. In 2017, Netflix went ahead and actually secured a deal for the concept, though Rae artfully dodged any confirmation of the news when I interviewed her later that year. She did, however, concede that the four of them had connected and were on a text chain together. Four years later, it seems less and less likely that the movie will ever be made, though Rae still gets questions about it. “Every year without fail,” she says when I bring it up again. “Zero comment! Nothing has changed.”

As if to taunt me some more, Rae tells me there is some kind of secret movie with someone in the works, but she can’t talk about it in case it doesn’t materialize. “Otherwise I’ll just be really sad, like, ‘Damn, I guess it’s not happening—and I talked about that shit.’ ”

“And I’ll blame you,” she adds. “I will.” She raises her brow and keeps a straight face. Then she busts out laughing.

You can read more from her interview here.

In a fun clip, the multi-hyphenated artist sat down to re-answer old interview questions with new answers. Check it below: 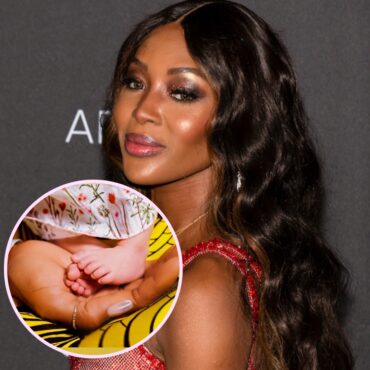 SURPRISE! Naomi Campbell Is A MOM – And She Showed Off A Peek At Her New Baby Girl

We can't say we saw this coming.  Supermodel Naomi Campbell is officially a Modelicious mommy! Her big announcement and a sneak peek at her baby, inside. Future Fashion Weeks are likely about to be a whole lot differently for Naomi Campbell.  The iconic Supermodel will now be hitting the runways and afterparties with the title of Mom added to her glamourous name.  And she's going to slay it just like […]