One of two Virginia police officers who is being accused of using excessive force during a traffic stop with an Army officer has been fired. Watch the tense traffic stop and get more deets inside…

Another day, another situation with racist cops caught on camera.

One of two police officers who pulled over a Black Army officer, held him at gunpoint, and pepper sprayed him, has been fired following an investigation. A Windsor, VA police officer pepper sprayed an Army officer – Second Lt. Caron Nazario, who is Black and Latino – during a traffic stop last December. And it was captured on police bodycam footage.

Caron Nazario was riding around in his brand-new Chevrolet Tahoe SUV with his dog in the backseat before he realized a police officer signaled for him to pull over. According to reports, the Army second lieutenant slowed down, turned on his turn signal, and looked for a well-lit place to pull over since it was dark outside.

During the encounter, the police officers drew their guns and pointed them at the Army officer after they pulled him for what they thought was a missing license plate on his new SUV. The cops said they pulled him because his car didn’t have a license plate, but the plate was clearly visible in the top right corner of the back window of his vehicle. You can see it in the bodycam footage.

According to the town of Windsor, Officer Joe Gutierrez, has been FIRED via press release.

The Town of Windsor, Virginia, acknowledges the unfortunate events that transpired on December 5, 2020 involving Lt. Caron Nazario and officers of the Windsor Police Department, Joe Gutierrez and Daniel Crocker.

The pursuit and ultimate stop resulted in the use of pepper spray against Lt. Nazario by Officer Gutierrez. As a result of this use of force, Department policy requires an internal investigation to determine the appropriateness of such actions. The investigation of this event began immediately. At the conclusion of this investigation, it was determined that Windsor Police Department policy was not followed. This resulted in disciplinary action, and department-wide requirements for additional training were implemented beginning in January and continue up to the present. Since that time, Officer Gutierrez was also terminated from his employment.

The Town of Windsor has remained transparent about this event since the initial stop, and has openly provided documents and related video to attorneys for Lt. Nazario. The Town will continue to provide information related to this event in its commitment to openness. The Town has also requested an investigation of this event by the Virginia State Police, and joins with elected officials who have called for a full and complete review of the actions of these officers.

The second officer, Daniel Crocker, is still employed by the police department. Before the Army officer was assaulted, Daniel Crocker radioed the station and told them they were pulling over a vehicle with tinted windows that appeared to not have a rear license plate. He called the situation a “high-risk traffic stop” and said the driver was “eluding police.”

Second Lieutenant Caron Nazario is SUING the town of Windsor, claiming the two officers violated his rights guaranteed under the First and Fourth Amendments. He filed his lawsuit in U.S. District Court in Norfolk where he claims unlawful seizure, excessive force, illegal search, violating his First Amendment right to free speech, and common law assault, battery and false imprisonment.

Sergeant Major of the Army Michael Grinston praised Caron for remaining calm during the situation:

I cannot comment on ongoing litigation, but I’ve been assured he is receiving the support from his leadership he needs during this time.

Situations like this are what I want Soldiers to discuss. This is the reality that some of our Soldiers still face. As a Leader, you should know that and be willing to have conversations about how events like this impact your teams.

Newsmax host Greg Kelly tried to drag the Black Army officer for having a legal gun in his vehicle, suggesting he brought the incident upon himself:

The Second Amendment exists fo reason, he has EVERY right to keep and bear arms. Do we know if he had a concealed carry license? Also, even if he doesn’t, in the state of Virginia you can legally have a handgun in a private motor vehicle. https://t.co/ivs3gKrR6J

Funny how “they” only believe laws were written for only certain people.

It’s all too familiar. Sounds almost like Philando Castile incident from 2016 (where the cop was acquitted) except he didn’t make it out alive – like many Black victims who come in contact with police during routine traffic stops. 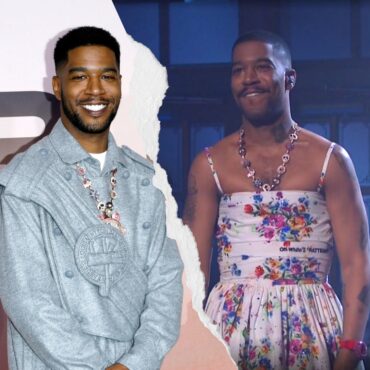 Kid Cudi Announces Fashion Collaboration With ‘Off-White’ Amid Outrage Over His ‘SNL’ Performance Dress. And, Yes, The Dress Will Be Included.

Kid Cudi was the musical guest for "SNL" this weekend, and his looks - like his floral custom made dress - caused a LOT of conversation.  Faux outrage or just toxic masculinity at play? Either way, Cudi is about to make a bag off of it.  Deets inside. Rapper/Actor Kid Cudi has always been a Kurt Cobain fan.  He has the late Nirvana rocker tatted on him, and he's spoken […]