Utah freshman running back Ty Jordan has reportedly died in an accidental shooting at the age of 19. Details inside…

Ty Jordan – a star freshman running back for the University of Utah – has reportedly died after accidentally shooting himself. He was 19.

According to authorities, the Denton (Texas) Police Department responded to a shooting at 10:38pm EST on Christmas Day (Dec. 25th). When officers got to the scene, they found a gunshot victim who had been shot one time.

Sadly, Ty Jordan was transported to a local hospital where he was pronounced dead.

Police officers had responded about an hour earlier to reports of a shooting at a home in Denton, a city 40 miles (64 kilometers) northeast of downtown Dallas. The officers found a man had accidently shot himself in the hip and began giving first aid, Denton police spokeswoman Allison Beckwith told The Associated Press Saturday. She said the man later died at a hospital and that investigators did not know how he came to shoot himself.

“Following a preliminary investigation, we do believe that this was an accidental shooting, where the victim accidentally shot himself,” Denton Police Department public information officer Allison Beckwith told ESPN.

We love you, Ty. pic.twitter.com/ZaXjWKg4Nc

“On behalf of the entire University of Utah, our love and condolences to Ty Jordan’s family, friends, teammates and coaches. We are devastated by this heartbreaking news. To watch Ty on the field was to be thrilled by his athleticism and talent. Rest In Peace, Ty,” Utah President Ruth V. Watkins said in a tweeted statement Saturday.

Ty Jordan – a Mesquite, TX native – was the Pac-12 Offensive Freshman of the Year after running for 597 yards with six touchdowns on 83 carries in five games for the Utes. Over the summer, the young athlete sadly lost his mother, Tiffany Jordan, after she was diagnosed with Stage 4 lung and bone cancer.

Dear mom, I love you so much, you’ve shown me over the past couple years how much a warrior you are. Watch over me and guide me momma Rest in Paradise A true Soldier! pic.twitter.com/ESoWShaRS9

Last year, Ty and his high school football opponent Gage Smith went viral as they took a knee to pray for Ty’s mother, who was battling cancer.

After the game he asked to pray together for Jordan’s mom. @ShermanBearcat2 @_ylfotyt

Jeff Neill, the head coach at the high school where Jordan played, told the Dallas Morning News, “his smile was infectious and his spirit shined bright on everyone that knew him.”

So sad! Prayers up to his family, friends, and fans. 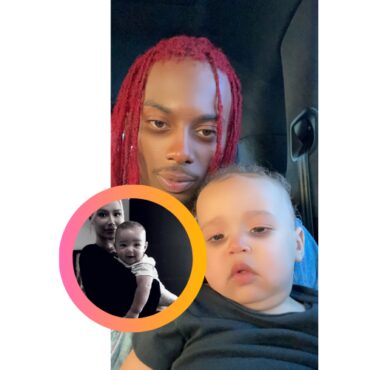 Looks like Playboi Carti straightened up his alleged deadbeat daddy behavior after Iggy Azalea dragged him for filth on Christmas Day.  We'll see how long it lasts.  The latest inside... There's nothing like getting a down and dirty dragging on Jesus' birthday to make you check yourself.  At  least for the moment. Rapper Iggy Azalea blasted her ex and child's father Playboi Carti about not being with their son Onyx […]