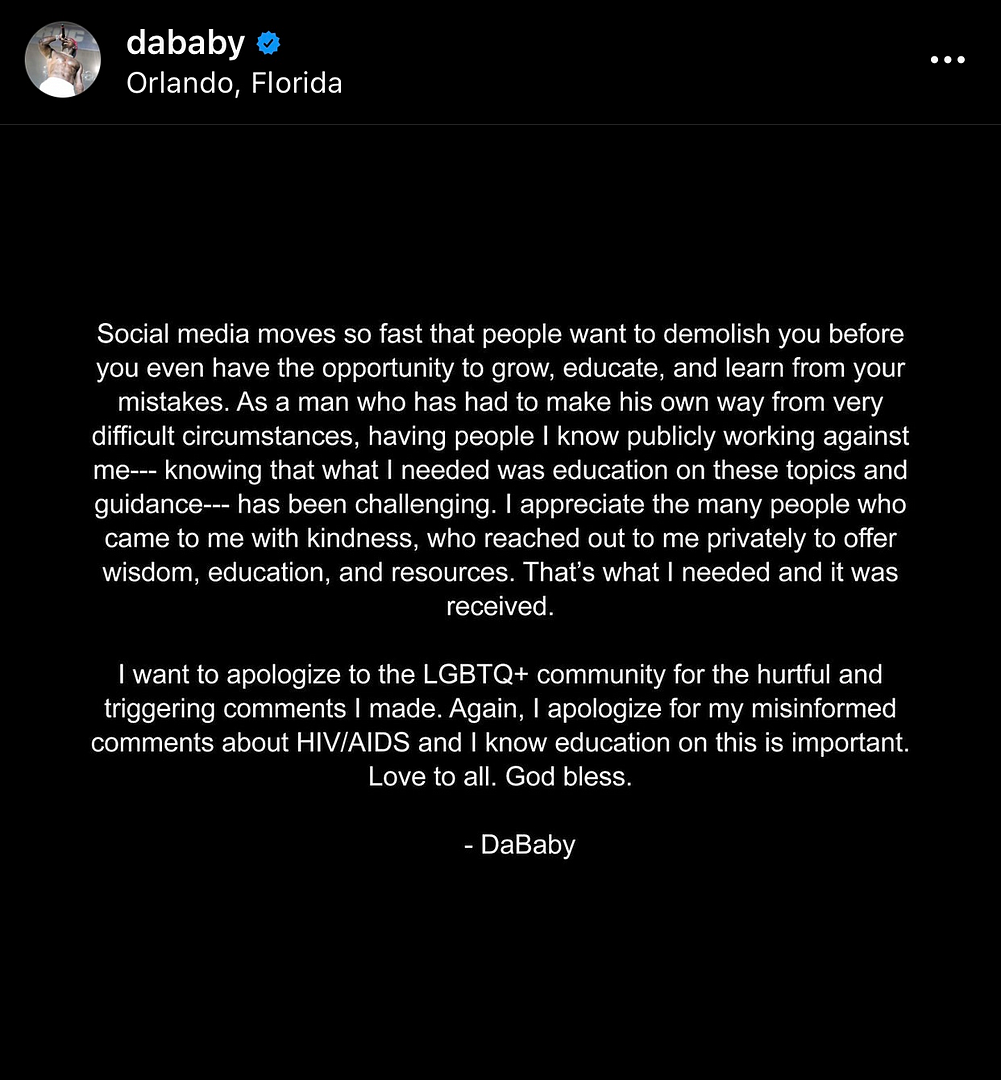 DaBaby is being cut from some major festival lineups following his problematic homophobic comments he made onstage at Rolling Loud festival in Miami last week. Now, he’s apologizing.

DaBaby has released an official apology to the LGBTQ+ community after he was cut from several major music festivals. He also apologized for his misinformed comments about HIV/AIDS.

DaBaby is losing “da bags” left and right following homophobic comments he made during his Rolling Loud Festival set in Miami last week. It’s clear his apology (if you want to call it that) hasn’t helped any.

A day after he was dropped from the Lollapalooza lineup, New York’s Governors Ball announced they too have canceled his performance at the festival, which is set to go down in September.

“Stay tuned for a lineup addition,” the festival’s official Twitter account tweeted along with a message from the promoter.

“Founders Entertainment does not and will not tolerate hate or discrimination of any kind. We welcome and celebrate the diverse communities that make New York City the greatest city in the world. Thank you to the fans who continue to speak up for what is right. Along with you, we will continue to use our platform for good,” the statement said.

The Day N Vegas Festival also announced DaBaby would be cut from their lineup. The three day festival is set to take place in November.

Less than 24 hours before the Governors Ball announcement, Lollapalooza announced DaBaby would be axed from the final day lineup. He was scheduled to headline the Bud Light Seltzer Stage. Instead, they added Young Thug as the headliner (who was previously slotted on the T-Mobile stage) and set rapper G Herbo to take over the T-Mobile stage.

Lollapalooza was founded on diversity, inclusivity, respect, and love. With that in mind, DaBaby will no longer be performing at Grant Park tonight. Young Thug will now perform at 9:00pm on the Bud Light Seltzer Stage, and G Herbo will perform at 4:00pm on the T-Mobile Stage. pic.twitter.com/Mx4UiAi4FW

“Lollapalooza was founded on diversity, inclusivity, respect, and love. With that in mind, DaBaby will no longer be performing at Grant Park tonight,” the festival said in part.

We recently witnessed inaccurate and hurtful comments directed towards our community. As the nation’s only HIV organization focused exclusively on ending the epidemic in Black America, here’s what you need to know:

When they go low, we go high: For 22 years, we have represented Black Americans who are most impacted by HIV. We are intentional about turning comments that stem from homophobia, transphobia, and ignorance about HIV into opportunities to uplift our people and reinforce the value of our work.

HIV impacts Black and LGBTQ communities the most: Of all Americans living with HIV today, Black LGBTQ communities are disproportionately impacted. This is not because of individual behaviors, but because of how HIV thrives on inhumanity, hatred, and exclusion. While mainstream media does not regularly focus on HIV anymore, it remains a crisis in Black communities.

HIV is not a death sentence: HIV science has made possible: an HIV test in the comfort of your own home, a daily pill to prevent HIV, and routine HIV treatment that keeps you healthy and stops the virus from passing on. People are thriving while living with HIV.

Stigma harms us more than HIV does: Stigmatizing this health condition, which is no different from many other chronic diseases, holds people back from accessing life-saving HIV services. It also deters the progress made toward uplifting the lives of people who are Black, LGBTQ, and/or living with HIV. All Black Lives Matter

Walking the talk: For 22 years, our programs have educated Black communities about HIV, trained Black HIV leaders, and provided safe spaces and stigma reduction programs. We are building and supporting the efforts that will end HIV in Black communities over the next 10 years. It is clear that Black leadership to end HIV is more critical than ever.

During his set at Rolling Loud, the North Carolina native encouraged the audience to put their cellphone flashlights in the air if they “didn’t show up today with HIV/AIDS or any of them deadly sexually transmitted diseases that will make you die in two to three weeks.” He also made derogatory remarks about HIV/AIDS and LGBTQ+ people. As expected, he was met with tons of backlash from the LGBTQ+ community, including public criticism from artist Elton John.

DaBaby doubled down on his comments while calling people b*tches and n-words for their responses. He claimed “his gay fans are cool with it” because “one gay fan in a crop top was vibing with him”.

His tone began to semi-change when Dua Lipa, whom he collaborated with recently, spoke out saying she was “horrified”. (Of course.) Singer Victoria Monet also offered up her services to replace Da Baby on his and Dua’s “Levitating” remix.

Since sharing his problematic statements onstage, the “Suge” rapper was pulled from his brand ambassador deal with Boohoo Man and he was dropped from the UK’s Parklife Festival. He was also axed from a benefit concert for the Working Families Party, which he was headlining alongside Saweetie and Wyclef Jean.

“We have to hold people accountable and live to our values, which is why there is a change in our lineup,” the Working Families Party stated.

While DaBaby has been getting dragged, he has also been defended by rappers like T.I. and Boosie who argue that DaBaby should be able to exercise his right to freedom of speech just lile Lil Nas X is allowed to.

Regardless of his opinion, his comments are causing him to fumble quite a few bags. Will there be more? Time will tell… 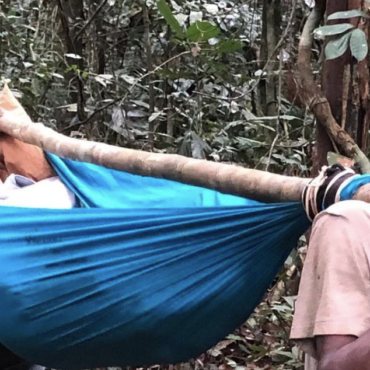 Ashley Judd Is Walking Again Almost 6 Months After Shattering Her Leg: ‘We Have Come a Long Way’ [Video]

Actress Ashley Judd is recovering after shattering her leg in four different places during a hiking accident back in February. via People: The 53-year-old actress, who has been documenting her rehabilitation process on social media, announced on Sunday that she was officially walking on her own again. “Dear Friends, It is with reverence and quiet awe I offer this update. Today, five months and three weeks after the accident in the […]