Trump Says ‘We Will Be Back In Some Form’ As He Exits White House For Florida, Speaks Lies On The Tarmac, No Traditional Handover

Trump is finally GONE! As Inauguration Day kicks off, Trump and his wife Melania lands in Florida. Before leaving, he gave his final address to the nation, promising “we will be back in some form.” More inside…

Finally! The day has come where Trump is no longer the President of the United States.

Before the Inauguration Day festivities kicked off, Trump bid farewell to Washington at Joint Base Andrews in Maryland before boarding Air Force Once with his wife Melania to make their way to Florida. By the time President Joe Biden made his way to the U.S. Capitol, Trump’s plane had landed in Mar-a-Lago.

Following a 21-gun salute, Trump started off his speech:

“This is a great, great country. It is my greatest honor and privilege to have been your president,” Trump said as his supporters chanted, “Thank you, Trump!” Trump’s daughter, Ivanka fought back tears as she listened to her father give his final speech as President.

“I will always fight for you,” Trump continued. “I will be watching. I will be listening. And I will tell you that the future of this country has never been better. I wish the new administration great luck and great success. I think they’ll have great success. They have the foundation to do something really spectacular.”

“We will be back in some form,” and he told his supporters, “Have a good life.”

Please don’t come back. We need the impeachment trial to convict Trump a second time, so we don’t have to worry about this vile man ever holding public office again. After inciting a violent mob to attack the U.S. Capitol because he felt the election was stolen should be enough reason why he should never hold office again.

Peep his speech above.

Trump and Melania hopped on Air Force One shortly before 9 a.m. for their final flight on the presidential aircraft. Woot! They touched down at Palm Beach International Airport in South Florida just before 11 a.m. They made their way to Palm Beach to Trump’s private Mar-a-Lago Club.

Watch them board the aircraft above.

Before Inauguration day, Trump said he wasn’t going to attend the ceremony. Right now, the nuclear “football” – which has all the nuclear war security codes – is still with Trump in Florida. There’s actually multiple footballs. A military aide accompanied Trump to Florida where he/she will receive one of the “footballs” at noon exactly. According to NBC News, another military aide with a second nuclear football will hand over the authority to Joe Biden once he is sworn in.

Michelle Obama graciously hosted Melania Trump at the White House immediately after 2016 election to ensure a smooth transition.
Melania Trump has done absolutely nothing for Dr. Jill Biden.
Some people are givers, others takers: pic.twitter.com/lBYWe32wkR

As Melania leaves the White House, she received the worst final popularity rating ever for a first lady in U.S. history. BLOOP!

Forever First Lady Michelle Obama received a 69% favorable rating (and so did Laura Bush), which is about average for departing first ladies. Hmph.

Trump has been accused of looting the White House during his departure.

A picture of man – likely one of Trump’s staff members – walking out of the White House carrying an Abraham Lincoln bust went viral. It’s believed the art is a part of White House property instead of something Trump owned personally.

We wonder what else he took before leaving…

That military aide better check to make sure everything that needs to be in that nuclear “football” is there.

With all that said, Deuces to that man. 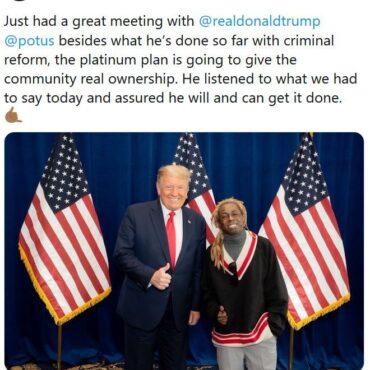 Trump has pardoned over 140 people before he officially left the White House. Rappers Lil Wayne and Kodak Black, along with ex-Detroit Mayor Kwame Kilpatrick, received pardons. More inside… Trump is no longer the President of the United States. And most of us are thankful for it. Before midnight, Trump commuted the sentences or pardoned 143 people during his 11th hour of presidency and some Hip Hop names were in […]