Trump defends the remarks he made and claims he didn’t incite violence before a mob of his supporters violently stormed the U.S. Capitol last week. A black Capitol police officer is being praised for his fast thinking, proving to be the REAL hero of the attack. Plus, the horned Trump supporter who got inside the Capitol requested only organic food in jail…and he GOT IT. Everything inside….

As House Democrats unveil article of impeachment against Trump, the failed commander-in-chief is still…doing what Trump does. Spew lies and more lies.

Today, he traveled to Alamo, Texas to defend his immigration policy and to tour some of the US-Mexico border wall. It’s the first time he has spoken publicly since the video he posted during the #MAGA mob attack. According to reports, Trump isolated himself in the White House following the vicious riot that took the lives of five people, including one Capitol police officer.

Before boarding a plane for the trip, Trump told reporters at the White House that he was NOT to blame for the violent insurrection at the US Capitol last week. Hours before the attack, he literally instructed his fan base to storm the federal building, saying:

“We’re going to have to fight much harder,” Trump told supporters at a rally near the White House before the assault. “We are going to walk down to the Capitol, and we’re going to cheer on our brave senators, congressmen and women, and we are probably not going to be cheering so much for some of them. Because you will never take back our country with weakness.”

However, Trump told reporters his remarks did NOT incite a riot and that his comments were “totally appropriate.” Before boarding his plane, he told reporters at the White House:

President Trump speaks to media at White House: “We want no violence…on the impeachment, it’s really a continuation of the greatest witch hunt in the history of politics…I think it’s causing tremendous danger in to our country…I want no violence.” pic.twitter.com/XjiIfLrrTS

“We want no violence…on the impeachment, it’s really a continuation of the greatest witch hunt in the history of politics…I think it’s causing tremendous danger in to our country…I want no violence,” he said.

45 then addressed his possible impeachment:

Trump also addressed being banned from social media. He blamed “big tech” for dividing the country and said they’re making a terrible mistake because they’re contributing to more violence.

Q: “What is your role in what happened at the Capitol? What is your personal responsibility?”

President Trump: “If you read my speech…people thought that what I said was totally appropriate.” pic.twitter.com/90Pdt8xFSz

“I believe it’s going to be a catastrophic mistake for them,” he said. “They’re dividing and divisive, and they’re showing something that I’ve been predicting for a long time.”

He also made sure to highlight the BLM protests that went down over the summer, but had no remarks for the people who participated in last week’s attack. No surprise.

Trump’s new remarks come one day before the House is set to impeach him – for the second time – for his role in inciting the violent attack.

A Black Capitol police officer is now being hailed as a HERO for his quick thinking during the attack.

Officer Eugene Goodman was alone when a group of Trump supporters confronted him. Clearly outnumbered. However, he held back the domestic terrorists long enough for Senators to escape as rioters were closing in on the Senate Chamber. He single-handedly saved the Republic.

Eugene Goodman deserves the Medal of Valor! He could have stepped aside and let Trump insurgents get to the Senate chamber while Senators were still there. Instead, this heroic officer got them to follow him the other direction, giving lawmakers time to escape! pic.twitter.com/BFeK3ZBktN

Now, folks are calling on President-elect Joe Biden should award him the Presidential Medal of Freedom.

Hey @JoeBiden
This is Eugene Goodman!
He risked his own life to protect members of Congress including the Vice President during the storming of the capital building.

He deserves the Presidential Medal Of Freedom!

This is Eugene Goodman.

He held back the terrorists just long enough for the Senators to escape. He single-handedly saved the Republic.

Biden should award him the Presidential Medal of Freedom. THIS is what a patriot looks like. #TrumpInsurrection #MAGATerrorist #NoFlyList pic.twitter.com/4gmGNVyjbb

Following the insurrection, The U.S. Attorney’s Office arrested Jacob Anthony Chansley (aka “Jake Angeli” or “QAnon Shaman”). He was the most recognizable terrorist in the group as he was seen in viral photos dressed in horns, a bearskin headdress, with red, white and blue face paint. The Phoenix resident turned himself into the FBI field office after returning from Washington, D.C. over the weekend. He’s being accused of knowingly entering or remaining in any restricted building or grounds without lawful authority and violent entry and disorderly conduct on Capitol grounds.

The failed actor who lives with his mom appeared before court yesterday, attending the hearing via phone from the detention facility where he is being held.

So check it. Jake Angeli’s court-appointed attorney told the judge that his client hasn’t been able to eat since he turned himself in Saturday because he has a restricted diet. Apparently, he follows a strict organic diet. So, what are they going to do?

UPDATE: Jacob Chansley (AKA Jake Angeli or QAnon Shaman) will be fed organic food, in line with his strict shaman diet, while in federal custody. “We will abide by the judge’s order,” U.S. Marshal David Gonzales said. @abc15 https://t.co/k6mxwQeofM

They’re going to give him exactly what he asked for: organic food IN JAIL. Jake, by the way, is a failed actor who lives with his mother.  Say less, right?

“We will abide by the judge’s order,” David Gonzales, U.S. Marshal for the District of Arizona, told ABC15 Monday evening. Gonzales added that Chansley will be provided food in line with a shaman’s strict organic diet.

Chansley’s mother, Martha, was in the courtroom Monday. Afterward, she explained his diet. “He gets very sick if he doesn’t eat organic food – literally will get physically sick,“ Martha Chansley said.

We wonder how many BLACK inmates who follow an organic diet are actually receiving “organic food.” This is AmeriKKKa.

As for the arrests…

We’ve given you info on some key rioters who have already been arrested and charged.

Richard Barnett, of Arkansas, was charged with “knowingly entering or remaining in any restricted building or grounds without lawful entry; violent entry and disorderly conduct on Capitol grounds; and theft of public money, property, or records. Barnett allegedly entered a restricted are of the Speaker of the House Nancy Pelosi.”

Adam Johnson has been arrested. pic.twitter.com/RIuItugpqL

Adam Christian Johnson, the man captured in a viral photo carrying Speaker Nancy Pelosi’s lectern from House chambers during the riot, has been arrested.

BREAKING: Eric Gavelek Munchel, who brought zip ties to the Capitol insurrection, has been arrested by the FBI. pic.twitter.com/xi36sIJwk6

Suburban Chicago man/CEO of a data analytics firm Bradley Rukstales was charged with “knowingly entering or remaining in any restricted building or grounds without lawful authority; or knowingly, with intent to impede government business or official functions, engaging in disorderly conduct on Capitol grounds; and violent entry and disorderly conduct on Capitol grounds.”

He has been fired from the CEO position.

And here are more arrests:

Eric Gavelek Munchel, a 30-year-old Tennessee Bartender.
Looks like a walking rapist & nobody gonna mix drinks w/zip-ties.
In that moment, showing off his kidnap-kit, he’s likely thinking of the fame to come.
He thought he owned the world.#CapitolRiot pic.twitter.com/Rr29Pj4PYp

Tennessee resident Eric Gavelek Munchel, who was photographed in the Senate chamber carrying zip ties used by police to detain suspects, was arrested.

The FBI captured the other man spotted with zip ties:

Larry Rendell Brock, of TX has been arrested for “knowingly entering or remaining in any restricted building or grounds without lawful authority & 1 count of violent entry & disorderly conduct on Capitol grounds.” pic.twitter.com/6ExGGFgdtw

Texas resident Larry Rendell Brock – who was also seen carrying zip ties – is facing two federal charges of knowingly entering a restricted building without lawful entering, and one count of violent entry and disorderly conduct. Guess what? His ex-wife was one of the people to report him to the FBI! That’s our kind of petty!

Doug Jenson drove from Iowa to attack the US Capitol.

How it How it’s
Started Going pic.twitter.com/mmC1VWG2kJ

Doug Jenson – the man the Black Capitol officer is seen pushing in the viral video (atop) – was arrested and charged. The Des Moines, Iowa resident five federal charges, including violent entry and disorderly conduct and obstructing a law enforcement officer during a civil disorder.

JUST IN | Our photojournalist just caught this image of WV Delegate Derrick Evans being brought into the federal building in Huntington. #WSAZ pic.twitter.com/eVIjPleCYp

WV Delegate Derrick Evans, who live streamed himself breaking into the Capitol and posted it on the internet, is among those being charged. This is him: pic.twitter.com/CUzjQd6ZrI

Derrick Evans is facing two federal charges for his role in the riot. Get this! He was elected to the West Virginia state legislature last month but resigned Saturday he was charged. It’s clear he’s not the brightest since he hopped on Facebook Live to stream video of himself inside the Capitol. DUMB.

Nick Ochs, one of the founders of The Proud Boys, has a Black wife and biracial child. I know the combination of fetishization and hatred of Black bodies is nothing new but I’m so disgusted right now. Some of these white men are really fucked up, ugh. pic.twitter.com/XeR1xjLpRs

Honolulu, Hawaii resident Nick Ohs – WHO HAS A BLACK WIFE and biracial kid – was arrested at the airport when he returned from Washington, D.C. He’s accused of unlawful entry of restricted buildings or grounds, after he posted a picture smoking a cigarette inside the Capitol building, tweeting: “Hello from the Capital lol”. He’s also reportedly a member of the Proud Boys.

And the plot thickens…

His name is Aaron Mostofsky. His dad is Brooklyn Supreme Court Judge. pic.twitter.com/fo4eC7mGqp

The FBI arrested Aaron Mostofsky, the son of an orthodox jewish NY Supreme Court judge, in Midwood Brooklyn THIS morning for his alleged involvement in the Capitol riot. Watch his arrest below:

BREAKING: Aaron Mostofsky, the son of a NY Supreme Court judge was arrested in Midwood Brooklyn on Tuesday morning for his alleged involvement in the Capitol riot. pic.twitter.com/MweFpdvLkX

Shoutout to everyone on social media staying on these people’s NECKS! Dozens of domestic terrorists have been arrested and charged, but there’s STILL work to do. The FBI has been releasing more images of rioters they are searching for. See if you see anyone you notice below:

The #FBI is seeking information to help identify individuals who unlawfully entered the U.S. Capitol on January 6 and assaulted federal law enforcement personnel. If you recognize someone, submit a tip at https://t.co/buMd8vYXzH. @FBIWFO https://t.co/Fn002FxqZd pic.twitter.com/MtWgQvdAS5

Help the #FBI identify individuals who unlawfully entered the U.S. Capitol on January 6 and assaulted federal law enforcement personnel. If you see someone you know, call 1-800-CALL-FBI (225-5324) or visit https://t.co/buMd8vYXzH to submit a tip. https://t.co/gQdjVoBG2N pic.twitter.com/Krnxy7iPMd

Help the #FBI identify individuals who unlawfully entered the U.S. Capitol on January 6. If you recognize someone, call 1-800-CALL-FBI (225-5324) or visit https://t.co/buMd8vYXzH to submit a tip. https://t.co/GBUQJkydGI pic.twitter.com/Mt0C4QTG4b

Check out flicks from inside the U.S. Capitol during the riot in our gallery below! 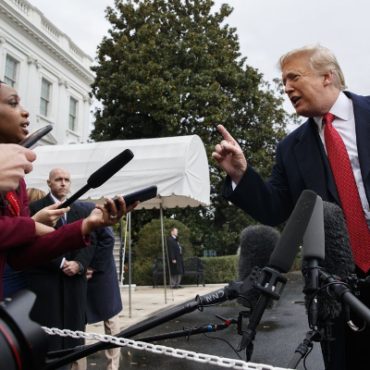 Black Girl Magic personified! Abby D. Phillip is the new anchor of “Inside Politics Sunday” and she has also been named CNN’s senior political correspondent. Woot! Celebrate inside….           View this post on Instagram                       A post shared by Abby Phillip (@abbydphillip)   As we come to the close of the Trump era (thankfully), a fresh […]