Travis Barker Says He Quit Using Prescription Drugs After Surviving Plane Crash: ‘That Was My Rehab’ 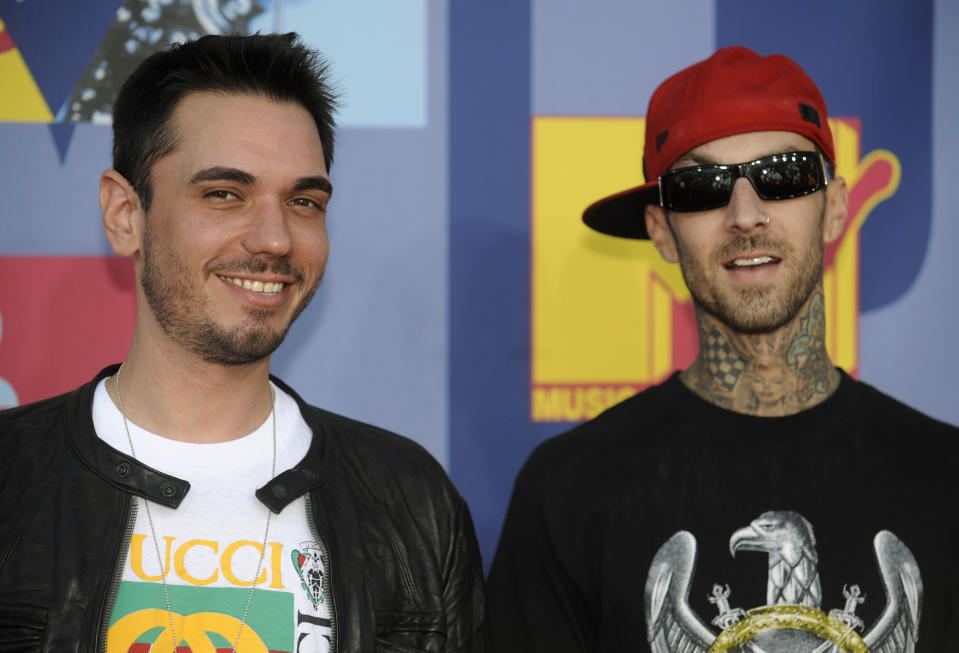 Travis Barker is opening up about the 2008 plane crash that nearly took his life.

In an interview with Men’s Health, the Blink-182 drummer discusses life being the only survivor from the traumatic event and the guilt that comes with it.

“I was dark,” Barker recalls, revealing he did three months of therapy to deal with posttraumatic stress disorder. “I couldn’t walk down the street. If I saw a plane [in the sky], I was determined it was going to crash, and I just didn’t want to see it.”

Barker was flying from South Carolina to Los Angeles on Sept. 19, 2008, after playing a show. During takeoff, tires blew on the private plane he and five others were traveling on. The plane skidded across a highway, hit an embankment and burst into flames. Barker and his best friend, Adam “DJ AM” Goldstein, were the only people who survived the crash as they were able to escape through an emergency exit despite the drummer being covered in flames. (Two pilots were killed along with two of Barker’s close friends, assistant Chris Baker and security guard Charles Monroe Still Jr.) Goldstein, who formed TRV$DJAM with Barker in 2008, died one year later from a drug overdose.

“We were each other’s therapists,” Barker says, explaining that he and Goldstein had trouble finding support groups for survivors of plane crashes. “So it was just him and me. When he left, I was like, ‘Oh, f***. I’m the only one in my club. It’s just me.’ And I find my ways to deal with it.”

Barker suffered third-degree burns on 65 percent of his body. He was hospitalized for three months, undergoing 26 surgeries and multiple skin grafts. It caused the musician to address a problem head-on he was dealing with before the accident: an addiction to prescription drugs.

“People are always, like, ‘Did you go to rehab?’” He shares. “And I [say], ‘No, I was in a plane crash.’ That was my rehab. Lose three of your friends and almost die? That was my wake-up call. If I wasn’t in a crash, I would have probably never quit.”

When Barker left the hospital, he flushed all the medications he had been sent home with down the toilet — “including stuff that I really needed” — and that was the end of it.

“There’s a million things that could happen to me,” he says. “I could die riding my skateboard. I could get in a car accident. I could get shot. Anything could happen. I could have a brain aneurysm and die. So why should I still be afraid of airplanes?”

Time and therapy have helped Barker deal with the trauma. He has a vegan CBD line, Barker Wellness Co. and he’s in a red-hot relationship with Kourtney Kardashian.

“It’s gotten better the further I get away from it,” he says. “The closer I was to it, it felt like I was closer to the bad stuff than I am to the good stuff. I felt closer to the experience of trying to escape, [to] being in an accident and being burned, trying to grab my friends from a burning plane. That haunted me for a long time. And as long as I was closer to that than this good stuff, I was always thinking about that. Now it’s been so many years, it’s getting easier for me. There are days where I’ll wake up and never think about it.”

Survivor’s guilt is real. It’s a good thing he’s been able to keep his life together.

The post Travis Barker Says He Quit Using Prescription Drugs After Surviving Plane Crash: ‘That Was My Rehab’ appeared first on LOVEBSCOTT.

Teddi Mellencamp Arroyave Will Appear on #RHOBH Season 11 After Being Fired: It Took ‘Lots of Convincing’

Teddi Mellencamp isn’t quite done with ‘The Real Housewives of Beverly Hills.’ via People: During an episode of the Teddi Tea Pod with Teddi Mellencamp podcast on Monday, current RHOBH Housewife Kyle Richards dished on her former costar’s upcoming appearance on the Bravo hit and revealed that she was partially responsible for getting Mellencamp Arroyave, 39, back on reality television. “I mean, I had to drag you,” Richards, 52, said […]