TOP TIER ENTERTAINMENT: EVE vs. Trina VERZUZ Battle Gave EXACTLY What It Was Supposed To Give 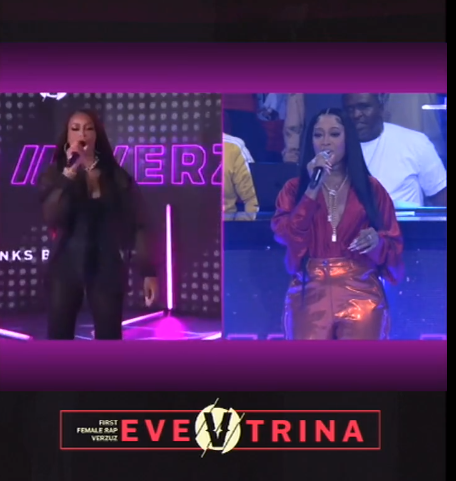 Eve & Trina joined forces for a friendly VERZUZ face-off that served up a hefty serving of Rap Sisterhood. It was the first female rap battle that we’re dubbing as one of the BEST battles yet. More inside…

Last night, EVE and Trina took us back to our teenage/early-20s selves with their VERZUZ Battle. It was the first female rap battle to premiere since the quarantine competition began last year.

When it was first announced the Pitbull In A Skirt & The Baddest B*tch would go head-to-head, folks had plentyyyyy to say, including some Gen-Z folks who chose violence and wouldn’t put RESPECK on the ladies’ names. However, their “battle” gave exactly what it was supposed to give and THEN some, especially for those of us who grew up listening to both ladies.

Unlike some of the earlier VERZUZ battles, the trailblazing MCs delivered their sets at different locations. Eve ran through her catalog of hits in London (where the Philly native currently resides), while Trina repped the 305 in Miami.

The battle went down on what would have been legendary rapper Tupac’s 50th birthday, so DJ Nasty opened the event with a tribute to the late rapper. The Diamond Princess kicked off her set with “Who’s Bad” and Eve followed up with her Swizz Beatz-produced hit, “Tambourine.”

At this moment, our inner teenage selves kicked into overdrive.

As the ladies went through their songs during the friendly battle, both paid tribute to the incomparable musical genius, Missy Elliott. The Diamond Princess rapped her verse on the Missy & Ludacris collaboration “One Minute Man,” while Eve rocked out with her Missy collab “Hot Boyz” (also featuring Nas, Lil’ Mo & Q-Tip) and also “4 My People.”

Later, Missy took to Twitter to thank the ladies and the fans for all of the love shown during the event:

I want to say this I am HUMBLY GRATEFUL because I’ve been on a lot of artist verzuz & I want to thank those AMAZING artist who believed in me as a Writer/Producer or just a artist I love yall 4 the love yall shown me https://t.co/DDwEGuSZ23

“I want to say this I am HUMBLY GRATEFUL because I’ve been on a lot of artist verzuz & I want to thank those AMAZING artist who believed in me as a Writer/Producer or just a artist I love yall 4 the love yall shown me,” Missy tweeted.

I’m proud of you both & yessss get ya flowers while you here to smell them #Verzuz pic.twitter.com/CapF10g1nM

The two “competitors” were more like two sisters bigging up one another as the other performed, dancing and rapping to each other’s lyrics.

“I wouldn’t have wanted to do this with nobody else than my sister, Eve,” the Diamond Princess said. “We’ve been knowing each other for over 20 years. We always showed love, we always supported each other, we always held each other down.”

It was literally ALL LOVE between them, which was refreshing being that it always seems like the industry pits female rappers against one another:

I love Trina & Eve connection because y’all women had that shit HYPE ASF like I was at an concert. Bless up! pic.twitter.com/7IrNqQqver

Singer Kelly Rowland received some shine as well as Trina performed her song with the former Destiny’s Child singer, “Here We Go,” and Eve rapped her bars from Kelly’s “Like This.”

Whoever had the best verse on My Chick Bad remix is gonna win this verzuz. So who y’all got, Eve or Trina? #VERZUZ pic.twitter.com/mdAQJJYTRB

Trina and Eve were also featured on Ludacris’ “My Chick Bad (Remix)” and they both rapped their lyrics from the track.

Trina brought out her homie Trick Daddy to perform their classic hit, “Nann” and the Miami crowd got HYPE. Peep the clip above.

There were no losers because BOTH ladies did their thing. We’re just happy we were able to witness this moment in Hip Hop HERstory. If you missed, you can check it out below:

And here’s the full TIDAL playlist below: 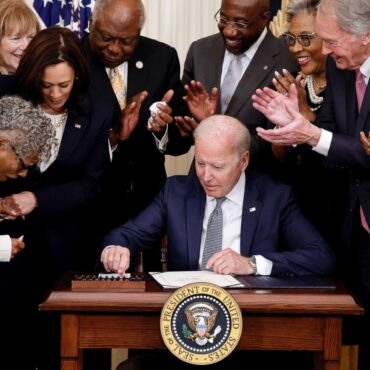 President Joe Biden and the U.S. House of Representatives have passed the bill officially marking Juneteenth as a Federal Holiday. What We Know: The bill was passed in the House with a vote of 415-14 on Wednesday and passed unanimously in the Senate on Tuesday. House Majority Leader Steny Hoyer couldn’t wait to vote on the bill and “urged bipartisan support” from other representatives. Bill sponsor Rep. Sheila Jackson Lee […]