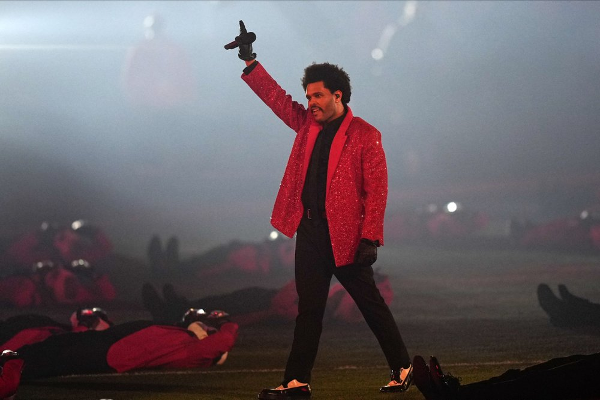 Singer The Weeknd was this year’s headliner for the much-anticipated Super Bowl Halftime show. And while his actual performance received mixed reviews from viewers, one thing everyone can agree on is the hilarious memes that were created from his performance.

The Canadian singer kicked off hi 14-minute performance in his signature red blazer, black slacks and sunglasses – an outfit he has been rocking at almost every major event lately. He ran through a melody of his hits, including “Call Out My Name,” The Hills” and “Earned It.” The performance began to pick up energy when he made his way to the field to perform his track, “Blinding Lights.”

It’s reported The Weeknd – who was snubbed by the Grammys this year – coughed up $7 million of his own money for his SB halftime performance, according to his manager.

Peep his performance below:

After his performance, he enjoyed a cigar:

still buzzing from last night. i couldn’t stop smiling the whole performance. thank you @pepsi @NFL @RocNation for believing in me to bring a fresh new take on the halftime show. XO we did it !

Twitter users were amused by The Weeknd’s facial expressions as he stumbled through a maze of “blinding lights.” Social media users grabbed screenshots and clips of the singer in the maze and compared it to hilarious real-life scenarios like – “Me losing my mom in the supermarket when I was 10.” Ha!

me losing my mom in the supermarket when i was 10#SuperBowl #SuperBowlWeeknd pic.twitter.com/4vFMt4rJkw

Peep more funny reactions and a gallery of hilarious memes (at the end of the post) below!

Me trying to find my wife at Target pic.twitter.com/ejNCEdTV1K

Me looking for attention because my boyfriend is ignoring me for football pic.twitter.com/XYe8qqzzbi

Me running to the bathroom after eating 4 different cheese dips for dinner pic.twitter.com/n6DsNKC7DC

There’s more where that came from in the gallery below!

The girlfriends and mothers of Kansas City Chiefs’ players were popping off on the referees on social media as the Tampa Bay Buccaneers were beating the Chiefs during Super Bowl LV. Read what the wrote inside…. The COVID-19 pandemic didn't stop this year's Super Bowl. Yesterday, Tom Brady and the Tampa Bay Buccaneers defeated Patrick Mahomes (the youngest to be named Super Bowl MVP) and the Kansas City Chiefs, 31-9, during Super Bowl LV. The win landed Tom Brady his […]