The Weeknd Reveals His New Face As GRAMMYs Ceremony Gets Pushed Back + Did He Shade The GRAMMYs In ‘Save Your Tears’ Video?!

The Weeknd has a brand-new face…and it seems he’s using it to bash the GRAMMYs. Find out what we mean inside…

New year. New face. Who dis? No, really…WHO IS THIS MAN?

The Weeknd continues his After Hours storyline with a bizarre new video titled “Save Your Tears.” The song is featured on the Canadian singer’s fourth studio album, After Hours.

The “Save Your Tears” visuals dropped just hours before news broke that this year’s GRAMMY Awards ceremony was postponed. The ceremony was originally scheduled to go down on January 31st in Los Angeles, but it was pushed to Sunday, March 14th, due to the COVID-19 pandemic.

Well, before folks scoop up gold trophies, The Weeknd has issued some subtle smoke. The 30-year-old singer made sure to sprinkle in some shade aimed at the Recording Academy in his new video. The reason? His album, After Hours, was NOT nominated for one GRAMMY Award. And he was pissed about it back in November:

The Grammys remain corrupt. You owe me, my fans and the industry transparency…

”The Grammys remain corrupt. You owe me, my fans and the industry transparency…,” he tweeted.

Now, he’s putting them on blast in an artistic fashion.

After fans of the singer got over his “new face,” they started to dissect his new video and realized he was throwing shade. You’ll recall, Weeknd had been promoting his new album with a “bandaged look” he rocked during press. His new video is the “big reveal” as a result of plastic surgery, although it’s fake. More on that in a few.

NME breaks down his video saga:

The first video to be released from the album was ‘Heartless’, in which The Weeknd parties in Las Vegas while high. He then gets bruised and bloodied in ‘Blinding Lights’. He’s decapitated in the video for ‘In Your Eyes’, while in ‘Too Late’ his head gets attached to another person’s body and he’s reanimated.

In the “Save Your Tears” music video, The Weeknd holds up a gold trophy before throwing it offstage.

i think Abel is showing us how constantly pressured he feels to be “perfect” by the industry, grammys etc so now he got that botched up face
and i think at some point he will have an alone again mv where he takes it off and learns to love himself for who he is pic.twitter.com/MgqtiQUfaa

”i think Abel is showing us how constantly pressured he feels to be ‘perfect’ by the industry, grammys etc so now he got that botched up face and i think at some point he will have an alone again mv where he takes it off and learns to love himself for who he is,” one fan wrote.

Also, fans noticed a lookalike of his ex-girlfriend Selena Gomez in the visuals.

Peep the new video below:

No, The Weeknd did not actually undergo plastic surgery. However, he did hire a dope artist to create his “surgery” look. Check out how the artist transformed the singer below:

Of course, social media has been having a field day with the memes:

The Weeknd out here looking like handsome Squidward pic.twitter.com/yAWUhTKgng

The Weeknd. The Wicked pic.twitter.com/fNBMGKwm2y

The Weeknd shared a close up of his face on his IG:

“Can’t feel my face” hittin a lil different lmaooo,” he captioned, referencing the title of one of his hit tracks.

Well, he got everyone’s attention…including the Grammys. 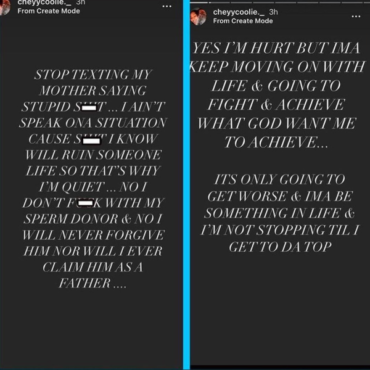 “Black Ink” honcho Ceaser has responded to physical abuse allegations brought up against him by his 16-year-old daughter, Cheyenne. She claims her father dragged her out of the shower while naked, punched and stomped her for not washing dishes. Then, Cheyenne and her mom get into a social media spat with Ceaser’s girlfriend, Suzette. More inside… 2021 rolled around and all hell broke loose between “Black Ink” star Ceaser Emmanuel, […]