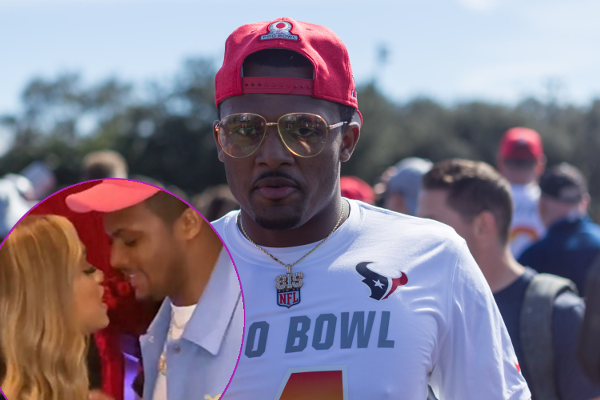 Houston Texans quarterback Deshaun Watson threw a birthday party for his girlfriend’s birthday and COVID-19 guidelines were not followed. It’s not a good look for the QB since the NFL has already fined him for breaking Coronavirus protocol. More inside..

Since the season is over for the Houston Texans, team’s quarterback didn’t waste any time to celebrate.

Days after his last regular season game, Texans QB Deshaun Watson hosted a party to celebrate his girlfriend, Jilly Anais’ 25th birthday. OK, the season is over and it’s her birthday, however, we are still very much in the thick of a pandemic.

The lavish birthday bash was filled with balloons, flowers, candles, a light up sign that said “Luv Bug,” yet, not one mask. According to TMZ, there were about 20 guests in attendance to celebrate the milestone birthday at Vic and Anthony’s Steakhouse, which Deshaun rented out.

The guests appeared to have had a good time, however, all COVID-19 guidelines were violated and thrown out the window. No social distancing was going on as COVID-19 numbers continue to rise across the U.S.

Below are a few flicks from the bash:

And here’s video from the party (if you can’t view it below, click here):

This isn’t a good look for Deshaun being that he was fined by the NFL a few weeks ago for appearing at the grand opening of his restaurant where social distancing wasn’t implemented and folks were not wearing masks:

#Texans fined a number of players, including Deshaun Watson for attending the opening of Watson’s new restaurant, according to @sarahbarshop. pic.twitter.com/q27RFY8Cuk

Deshaun was fined $7,500 and his teammates were fined $5,000 apiece for breaking an NFL-NFL Players Association collectively bargained rule that prohibits three or more players from gathering outside of a team facility.

There’s talk Deshaun wants to be traded from the Texans less than four months after signing a $156 million extension. Sheesh.

These rappers and athletes are just going to continue doing whatever they we want.  Covid and their wallets be damned.

The NYPD has reported that police shot a man who seemed to hallucinate inside a Queens home after lunging at them with a knife. What We Know: Officials conducted a press conference at the scene Friday evening and stated it was the second time officers had arrived at the home, on 64th Street near 55th Avenue, that day and the third time this week regarding calls about the same man. Police responded to the home earlier Friday at around 10:50 […]