Fans and celebs were heavy on the party scene after the Bucs’ Super Bowl LV win! And mayors of Tampa Bay and St. Petersburg in Florida aren’t happy seeing all of the maskless party people. More inside…

Super LV brought tons of parties and celebrities into the city for some football fun.

It appears the COVID-19 pandemic guidelines went out the window after the Tampa Bay Buccaneers defeated the Kansas City Chiefs, 31-9, during Super LV. If we’re being technical, guidelines weren’t being followed during pre-Super Bowl events either, which we’ll discuss later.

While majority of the people seemed to have been following COVID-19 protocols before and during the game, AFTER the game is when folks began to cut up.

DeSantis’ herd immunity plan in full effect for Super Bowl early this am in Tampa pic.twitter.com/hT1wgVhAv0

The party is just getting started in Tampa #Bucs pic.twitter.com/47UCB4SWOL

Fans have been rocking this tree back and forth for the last hour. This on South Howard in Soho. BE SAFE out there if you’re celebrating tonight. @FOX13News pic.twitter.com/p7kinGo09f

LAWD! We know Dr. Anthony Fauci had a fit after seeing these clips.

Days before the Super Bowl, Tampa Bay officials announced a new executive order had been signed requiring everyone to wear a mask during the Super Bowl festivities:

MASK UPDATE: For the health and safety of Super Bowl fans and the community, Mayor Jane Castor has signed an Executive…

“It is a little frustrating because we have worked so hard,” Tampa Mayor Jane Castor said during a post-Super Bowl news conference with the Super Bowl Host Committee. “At this point in dealing with COVID-19, there is a level of frustration when you see that.”

Peep the conference below:

“I’m proud to say the majority of individuals that I saw out and about enjoying the festivities associated with the Super Bowl were complying,” she said. “They understood their level of personal responsibility and they were doing the right thing. I’m very proud of that.”

The Bucs hosted the official Super Bowl afterparty at the Florida Aquarium in Tampa where Ludacris and the Migos performed before a packed crowd:

They had a firworks show too.

Here’s a clip of Bucs player Rob Grownkowski turning up on stage with the Migos:

Rob Gronkowski turning up with the Migos pic.twitter.com/af9aCbeG1n

Cardi B – who just dropped her new single “UP” – was with her husband Offset on the party scene after watching the game from their stadium suite:

.@iamcardib and @Migos in #Tampa last night at a #SuperBowl party #GotThatHipHop pic.twitter.com/tHWPj9RoUr

Cardi B & Offset watching the #Superbowl together pic.twitter.com/mhozaWDnfS

By the way, Bardi was featured in a “Wayne’s World” themed Super Bowl ad for Uber:

Cardi B and Dana Carvey on set of the ‘Wayne’s-World’ themed #SuperBowl commercial. pic.twitter.com/8mQcTLMQQb

Catch my Uber commercial at the Super Bowl . pic.twitter.com/M5lCO7QPnH

And here’s the ‘fit she wore to the game:

50 Cent was called out by the Mayor of St. Petersburg for hosting a maskless pre-Super Bowl party. The “Power” producer performed before a packed crowd at Albert Whitted Airport one night before the big game.

Mayor Rick Krisman called called the actions of the rapper/TV producer “stupid” as the state has been hit hard by rising COVID-19 numbers.

This isn’t how we should be celebrating the Super Bowl. It’s not safe or smart. It’s stupid. We’re going to take a very close look at this, and it may end up costing someone a lot more than 50 cent. @TMZhttps://t.co/Vrvg8fTdBB

“This isn’t how we should be celebrating the Super Bowl. It’s not safe or smart. It’s stupid. We’re going to take a very close look at this, and it may end up costing someone a lot more than 50 cent,” he tweeted in response to a TMZ article.

Tons of celebs were in Tampa and its surrounding counties for the Super Bowl parties, including City Girls, Migos, MoneybaggYo, Rick Ross, 2 Chainz, Tyga and recently pardoned rapper Kodak Black.

The Migos performed for a pre-Super Bowl concert:

The Migos having a concert in Tampa pic.twitter.com/A1EDGsA34U

Rapper MoneybaggYo got his fans turned up in Tampa for a performance at a crowded Club Skye:

City Girls were in the maskless mix:

The City Girls having a party in Tampa last night pic.twitter.com/XefasUl62I

Rapper Kodak Black – who was recently pardoned by Trump – soaked in his newfound freedom:

Cardi B & Offset watching the #Superbowl together pic.twitter.com/mhozaWDnfS

Just a friendly reminder: The pandemic isn’t over just because you’re over it! 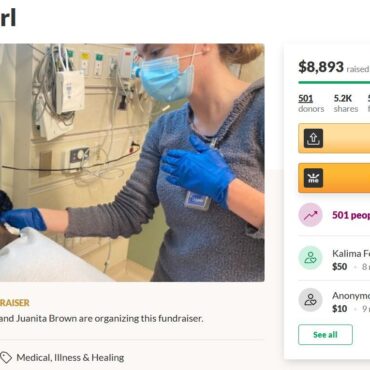 Tessica Brown – the woman who went viral after sharing she used Gorilla Glue spray in her hair – could possibly be considering legal action after her emergency room visit was unsuccessful. Once news hit that she was lawyering up, Gorilla Glue issued a statement. Get it all inside… Here’s an update about the woman who went viral for using gorilla glue adhesive spray in her hair instead of got2b […]