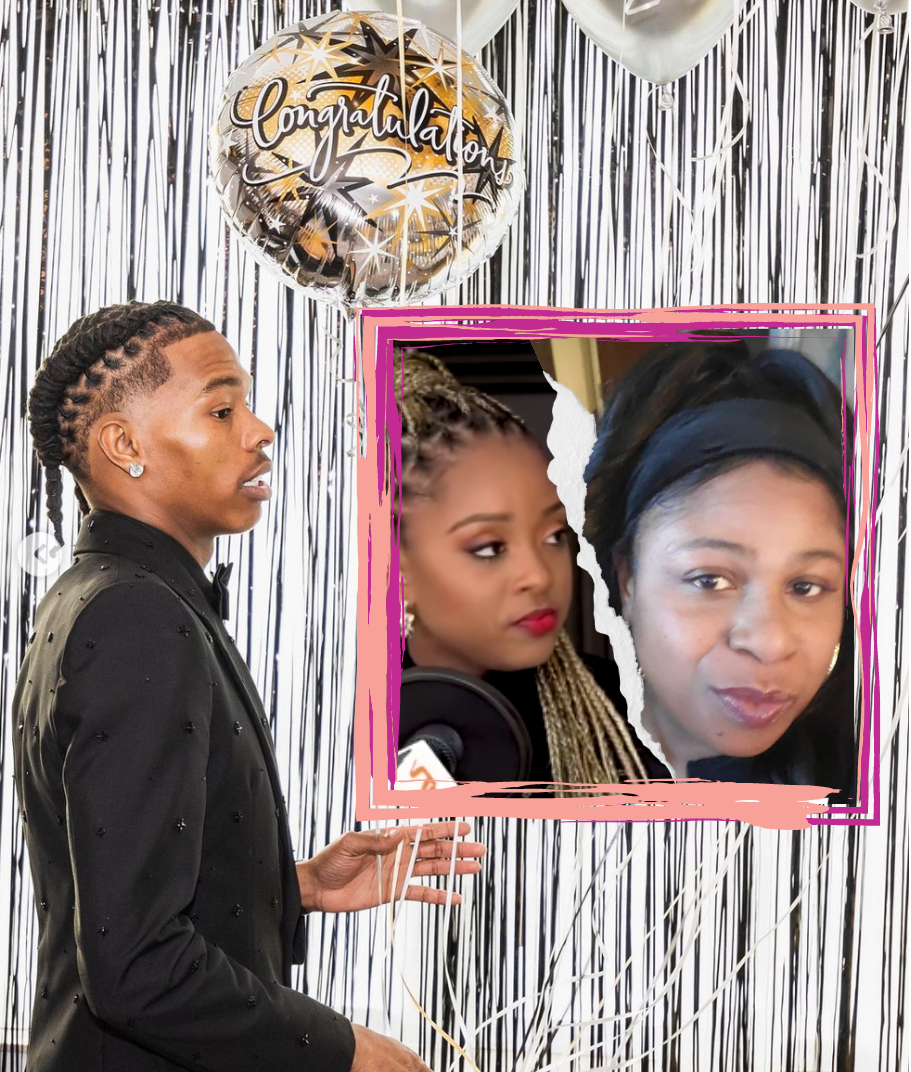 Lil Baby used his platform to deliver a powerful statement about police brutality for his Grammy performance, bringing out rapper Killer Mike and activist Tamika Mallory. However, everyone wasn’t here for it, specifically Samaria Rice – the mother of murdered teen Tamir Rice. And she wasn’t shy about sharing her REAL feelings towards Tamika. Things get dicey inside…

Grammy nominee Lil Baby made a political statement during his performance at the 63rd annual Academy Awards. He performed his protest hit “The Bigger Picture” and made sure to put on a show.

At the beginning, he had actors play police officers gunning down a black man before Lil Baby appeared to rap his verse. The song’s lyrics explore the aftermath of George Floyd’s murder and what it’s like growing up as a black person in America.

During the performance, Lil Baby brought out rapper/activist Killer Mike and activist Tamika Mallory, who delivered a personal message to President Joe Biden.

“President Biden, we demand justice, equity, policy and everything else that freedom encompasses. We don’t need allies, we need accomplices.”

“My performance is important to me and I had to make sure it was right,” Lil Baby dished to Rolling Stone on Sunday. “Nominations aside, actually performing ‘The Bigger Picture’ means the most to me. I paint pictures with my songs and wanted the performance to bring that picture to life. Just like with the song, this performance had to reflect the real. No sugar-coating. My family, my fans and my city know who I do this for.”

Samaria shared a clip of Tamika’s portion of the performance and called her out for clout chasing: “Look at this clout chaser did she lose something in this fight i don’t think so. That’s the problem they take us for a joke thats why we never have justice cause of shit like this.”

”F*ck a Grammy when my son is dead,” she wrote in another post. “F*ck all pigs cops.”

“Melina you are lier you rob the families remember you hung up on me and my sis when I ask you why raised the Money and you don’t have a plan,” Samaria wrote. “Melina you and your crew needs to be pit in jail for using the families to live a comfortably life Off the blood of our babies. Families are struggling and yall b*tches living it up with out a care in the world you Jr police cops Yall never took care of the chapters that help get yall fucky ass off the ground. F*ck blmglobanetwork. I can do the fight if yall stop robbing us families for justice,” Samaria wrote.

Samaria said people were reporting her post for “bullying,” but she didn’t stop poppin’ off on the activists she claims are clout chasing. 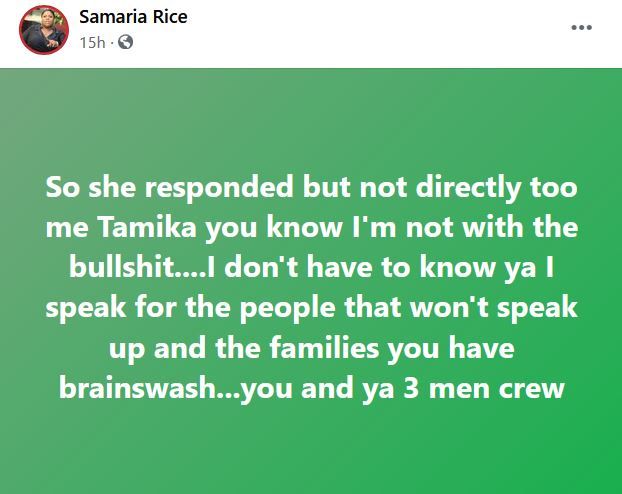 “So she responded but not directly too me,” Samaria wrote on her Facebook account. “Tamika you know I’m not with the bullsh*t….I don’t have to know ya I speak for the people that won’t speak up and the families you have brainswash…you and ya 3 men crew,” she continued. 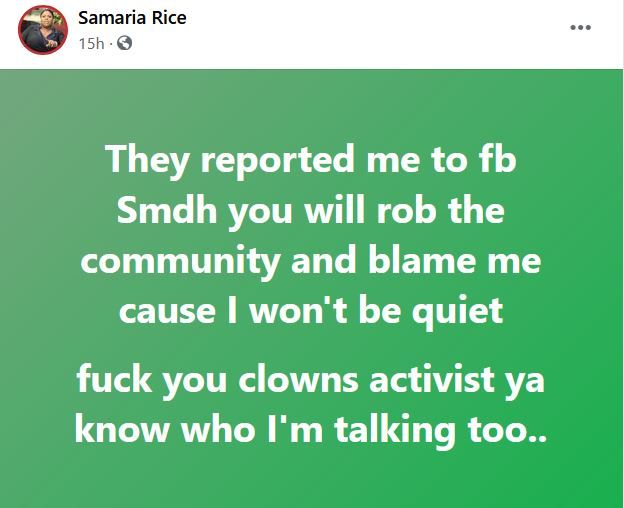 “They reported me to fb Smdh you will rob the community and blame me cause I won’t be quiet. f*ck you clowns activist ya know who I’m talking too…,” she wrote. 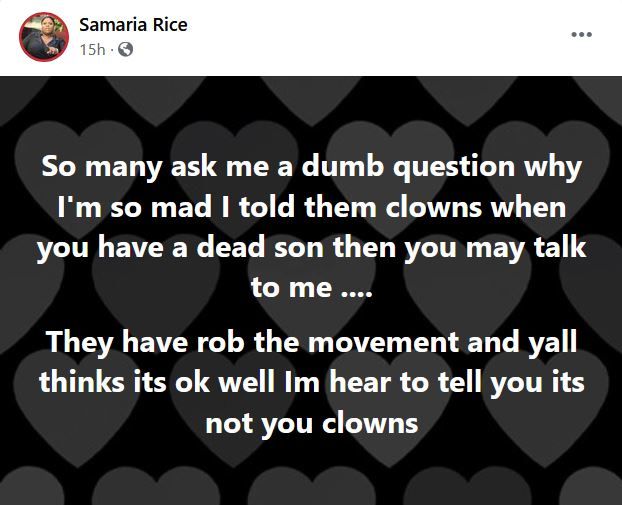 “So many ask me a dumb question why I’m so mad I told them clowns when you have a dead son then you may talk to me …. They have rob the movement and yall thinks its ok well Im hear to tell you its not you clowns,” she continued.

U wanna talk ill pull up

This my reality every day losing their baby brother Tamir Rice.. So don’t ask me why im mad …

Be mad at the government they made all this possible when they murder my son , yo son you daughter , yo mother ,yo…

And this just didn’t start because of the Grammys. Sis has been going IN on Tamika, Ben, Lee and more for a while. Last weekend, she blasted them as well: 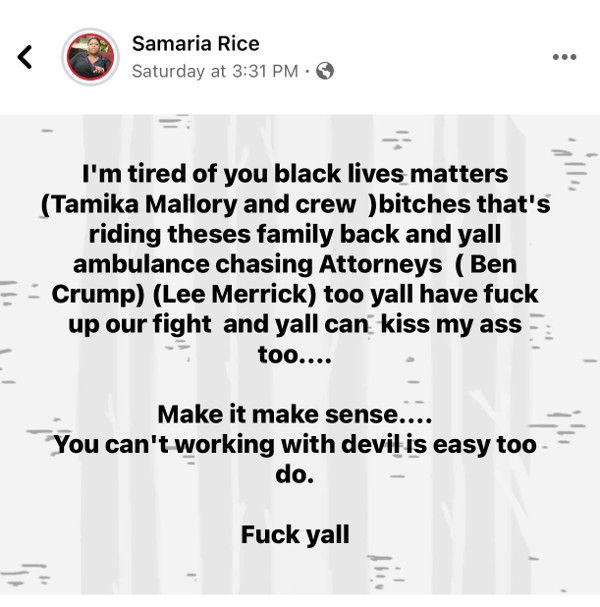 “I’m tired of you black lives matters (Tamika Mallory and crew) b*tches that’s riding theses family back and yall ambulance chasing Attorneys ( Ben Crump) (Lee Merrick) too yall have f*ck up our fight and yall can kiss my ass too,” she wrote. “Make it make sense….You can’t working with devil is easy too do. F*ck yall,” she wrote.

Over the past few weeks, the mother of Tamir Rice, has posted a wide variety of frustrations and grievances on Facebook….

This world doesn’t give you many friends. ⁣ ⁣ @TamikaDMallory is my friend. ⁣ My sister. ⁣ ⁣ She’s been there for me… 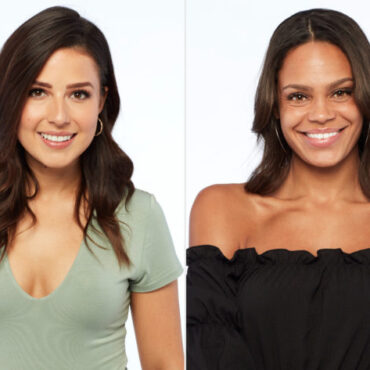 ‘The Bachelorette’ fans — you’re getting not one new season, but two back-to-back. A surprise bonus season of The Bachelorette was announced during Monday night’s The Bachelor: After the Final Rose special. Katie Thurston and Michelle Young were announced as the next leading ladies for the franchise. via People: “We’re the Bachelorettes,” Young and Thurston said in unison on stage. The two women will serve as the lead for their […]