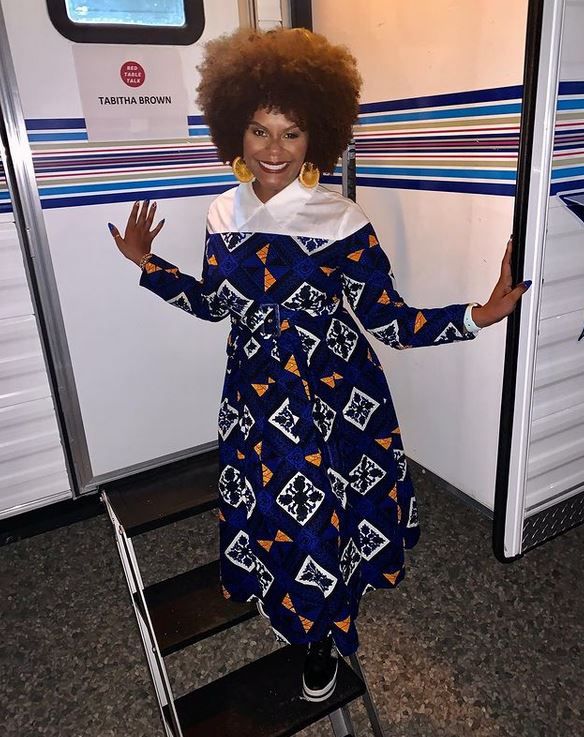 Social media sensation Tabitha Brown is fulfilling a lifelong acting dream! The vegan leader has been tapped for a role in Lena Waithe’s “The Chi.” Deets on her role inside…

Tabitha Brown is leveling up and we love to see it!

Vegan influencer Tabitha Brown has been stealing hearts all over social media with her infectious personality and delectable vegan recipes. Even if you aren’t vegan, she’ll suck you in with her charisma, sense of humor and her soothing voice. There’s even a petition for iPhone to change Siri’s voice to Tabitha’s. No, really.

2017 is when Tabitha Brown first went viral with her “TTLA” sandwich at Whole Foods. It became so popular, Whole Foods added the vegan sandwich to its stores worldwife and even made her its plant based brand ambassador. Since then, she has posted videos of herself and her family, sharing her vegan lifestyle, relationship tips with her husband and more.

2020 rolled around and the game totally changed for Tab (like this, like that). Her carrot “bacon” recipe she posted on TikTok went viral and now the world is finally getting a glimpse of Black Girl Magic many of us have already been soaking in on the daily.

If you’ve followed Tabitha’s journey, then you know she has always aspired to be an actress. While she took a different route to get there, she’s finally here, and she’s ready to make a splash on the acting scene because…THAT’S HER BUSINESS.

The North Carolina native has been tapped to star in Showtime’s “The Chi,” where she’s set to play Octavia, a successful interior designer who fortuitously crosses paths with Kiesha (Birgundi Baker).

”OOHHH GOD I THANK YOU,” Tabitha wrote on Instagram to share the good news with her followers. “So excited to join @shothechi family!!! Thank you @lenawaithe for seeing me for me!! I’m so grateful I can’t wait to share this journey with all of you!! Thank you for your support! #childhooddreams #actress #tabithabrown”

Leading up to the announcement, the Internet sensation was teasing something special was coming up, but she had to keep it under wraps:

Also, Curtiss Cook – who plays Douda – has been promoted to a series regular for Season 4. Additionally, ATL star Jason Weaver – who is a Chi-town native – is set for a recurring role as Rahsaad “Shaad” Marshall, an old friend of Trig’s (Luke James) who is struggling to rebuild his life.

A post shared by Jason Weaver aka “J Weav” (@itsjasonweaver)

”The Chi” is currently in production in Chicago and will return to the network later this year.

As Tabitha’s starpower continues to grow, folks have started making impersonation videos, including “Claws” actress Niecy Nash. Get your laugh on below:

Traditional viewership ratings for this year’s Super Bowl plunged, however your faves Michael B. Jordan, Cardi B, and Drake made appearances in commercials for big brands. Get into their Super Bowl ads inside… There were high hopes Super Bowl 55 would bring a competitive game: old school vs. new school as longtime vet Tom Brady and the Tampa Bay Buccaneers went up against young, talented Patrick Mahomes and the Kansas City Chiefs. However, the game didn’t deliver. The Chiefs played […]