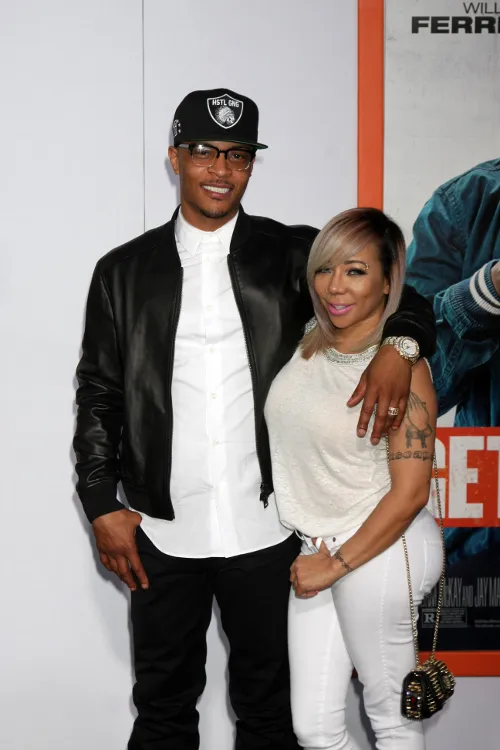 The sexual assault scandal brought up against rapper T.I. and his wife Tiny Harris intensifies. Their former friend, Sabrina Peterson, has filed a lawsuit against the couple for defamation. Also, an attorney has come forward on behalf of 8 people who claim they were victimized by the couple or members of their entourage, asking authorities in Georgia and California to launch criminal investigations.

The sexual assault allegations made against rapper T.I. and his wife/XSCAPE singer Tameka “Tiny” Harris have intensified. There are new developments surrounding the Atlanta rapper and his wife allegedly victimizing people, where anonymous people have accused the Hip Hop couple of drugging and coercing women into sexual situations, some allegedly against their will.

You’ll recall, the sexual scandal was brought to light back in January after the couple’s former friend, Sabrina Peterson, accused T.I. (real name Clifford Harris) of holding her at gunpoint in front of children a few years ago. After putting Tip on blast, she asked other possible victims to contact her.

The Glam University CEO threatened “civil legal action” and she kept her word.

According to reports, Sabrina Peterson has filed a lawsuit against Tip & Tiny for defamation. In the legal documents, she claims the couple’s public statements & social media posts reacting to the allegations have tarnished her name.

Apparently, it all started after Sabrina got into an altercation with Tip’s assistant. She alleged the L.I.B.R.A. rapper pulled out a gun, pointed it at her head and said, “B*tch I’ll kill you.” In her original social media post about the incident, she said he did this in front of her children.

You’ll recall, the XSCAPE singer hopped online to defend her husband against the allegations that were being made against him. 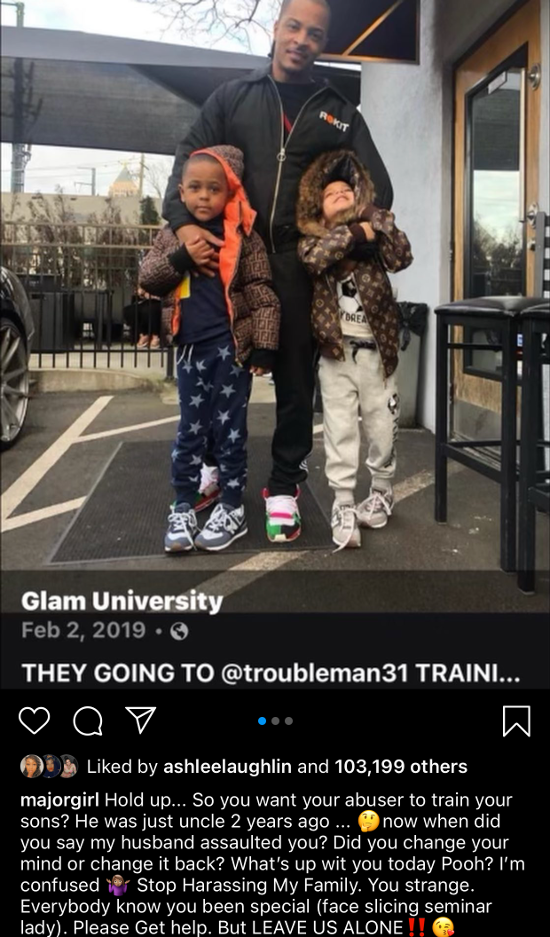 “Hold up… So you want your abuser to train your sons?,” Tiny wrote in the caption of a picture of Sabrina’s son all smiles with “Uncle Tip.”

“He was just uncle 2 years ago Now when did you say my husband assaulted you? Did you change your mind or change it back? What wit you today Pooh? I’m confused,” Tiny wrote in the caption of a picture of T.I. with Sabrina’s children. “Stop Harassing My Family. You strange. Everybody know you been special (face slicing seminar lady). Please get help but LEAVE US ALONE.”

After Tiny put up the post with her husband and Sabrina’s kids (that’s still currently on her timeline at the time of this post), Sabrina said Tiny’s post exposed her son to “vitriol and danger.”

Following Tiny’s clapback, T.I. also responded to the allegations in a lengthy IG video, denying all of the sexual abuse allegations and denying what Sabrina said about him holding her at gun point. Since Tip “singled her out,” Sabrina said his video has led to her receiving harassing and threatening messages on social media.

The Harrises responded to Sabrina’s lawsuit via their attorney Steve Sadow. He told TMZ T.I. & Tiny “deny in the strongest possible terms these unsubstantiated and baseless allegations.”

“These allegations are nothing more than the continuation of a sordid shakedown campaign that began on social media. The Harrises implore everyone not to be taken in by these obvious attempts to manipulate the press and misuse the justice system.”

It gets WORSE for the Hip Hop couple.

Not only are they being sued, but now there’s an attorney reportedly seeking justice on behalf of 8 people who claim they were victimized by the 40-year-old rapper, the 45-year-old singer or a member of their entourage. The allegations include claims of drugging, kidnapping, coercing, rape and intimidation.

According to WSBTV, attorney Tyrone A. Blackburn (a New York-based lawyer) is looking to get authorities in two states – Georgia & California – to launch criminal investigations against the couple after more than 30 women – including victims & witnesses – contacted him in recent weeks.

Blackburn detailed some of those allegations in a news conference Monday. He said the the majority of the incidents, which date back to 2007, happened in Atlanta. Blackburn gave examples of women who said anonymously that the had been drugged and raped by the couple and one woman who said a security guard kidnapped her at gunpoint, drove her into the woods and raped her.

The allegations span more than 15 years and are “eerily consistent,” the release stated.

One of the accusers name dropped Nelly!

An Instagram account – @notyourmodelvictim (seemingly created by Sabrina) – shared a video that details all of the allegations brought against the couple. One victim -dubbed Jane Doe #4 – claims she was approached by Tiny in 2005 to be their assistant and claims she was never paid for the work she did. During the duration of her time with the couple, she claims there was a time T.I. forced her to ingest 8 ecstasy pills while Tiny was near and that she was forced to have sex with different women against her will. In 2014, she claims the duo forced her to have sex with rapper Nelly. Check it at the 3-minute mark below:

A post shared by Not Your Model Victim (@notyourmodelvictim)

In 2017, Nelly was accused of rape by a woman named Monique Greene. She said the rapper raped her on his tour bus in Seattle in 2017 then defamed her when he claimed she made up the accusation. It’s unclear what happened, but Nelly and Monique agreed to settle. However, the terms of the settlement were not released. Before Monique settled, two other women came out with sexual assault allegations https://www.npr.org/sections/thetwo-way/2018/01/25/580691539/in-lawsuit-… “>against Nelly.

Nelly requested a U.S. court to dismiss the British woman’s lawsuit (one of the two other women) that alleged he sexually assaulted her after a concert in England. He settled that case as well.

Also, five women also spoke to the New York Times accusing the couple and others “in their orbit” of sexual abuse.

A military veteran, a former friend-turned-assistant, an exotic dancer and a teenage intern at T.I.’s studio and record label, Grand Hustle, were among the accusers, the lawyer’s letters said.

The New York Times has spoken with five people who, the letters said, were drugged, raped or sexually assaulted by the Harrises or those in their orbit, along with multiple individuals, including friends or family members, who said they were told of those episodes soon after, often within days. In three of the cases, The Times also reviewed messages or photos that supported their timeline of events. In interviews, the women portrayed the rapper and his wife as aggressors who deployed drugs, alcohol, money and their celebrity status to prey on and entrap women for sexual abuse, and then threatened violence against anyone who might speak out.

MTV has suspended production of T.I. and Tiny’s reality show amid sexual abuse allegations. Also, an unidentified woman, who claims she was sexually abused by the couple, has hired famed attorney, Lisa Bloom. If you didn’t know, Lisa and her mother, Gloria Allred, represent several sexual assault victims in high-profile cases, so we shall see how this all pans out in court.

You can read more here. 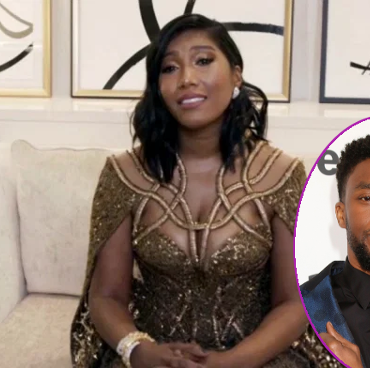 Between Chadwick Boseman’s wife and the kiddies who happily recognized him as “The Black Panther” during the 2021 Golden Globes our tissues were wet with tears. The Black Panther star was awarded Best Actor in a Drama award and his wife, Simone Ledward Boseman, accepted the award on his behalf. Peep her emotional acceptance speech inside… It still doesn’t feel real that Chadwick Boseman is no longer with us. While […]