#SoHoKaren Miya Ponsetto Doesn’t Feel Like She Committed Crime Because She’s ‘Just As A Kid At Heart As He Is’, TRIED IT With Gayle King

#SoHoKaren Miya Ponsetto speaks out after she physically attacked a the 14-year-old son of jazz musician Keyon Harrold Sr. in a hotel lobby because she thought he stole her iPhone. Miya served up a half-assed apology that Keyon Sr. & his wife aren’t accepting. More inside…

Miya Ponsetto is the definition of SPOILED & PRIVILEGED.

The 22-year-old woman caught on camera physically tackling a Black teenager in a New York hotel was arraigned over the weekend:

Miya Ponsetto was officially charged in a Manhattan court on Saturday with attempted robbery, grand larceny, endangering the welfare of a child, and two counts of attempted assault after she was arrested in California during a traffic stop. According to reports, cops had to DRAG her out of her vehicle because she refused to get out. Now if her complexion was any darker….

You’ll recall, Miya was captured on video at the Arlo SoHo hotel physically tackling Keyon Harrold Jr., the 14-year-old son of Grammy Award winning jazz trumpeter Keyon Harrold Sr., because she thought he had stolen her iPhone. The Black teen hadn’t stole ANYTHING. Miya’s phone was later returned to her via the hotel and not by an Uber driver as previously reported. The fact remains the person she attacked who she THOUGHT had the phone didn’t have the phone.

Before her arrest, Miya sat down with her attorney Sharen Ghatan to chop it up with “CBS This Morning” co-anchor Gayle King, so she could tell her side of the story. However, the interview went LEFT when she tried to disrespect Gayle. As Gayle questioned her about her motives, you could tell she was getting upset before she had the audacity to get smart with Gayle!

In the clip below, Miya kept trying to downplay the situation, but Gayle wasn’t letting her get off that easy.

“Gayle, ENOUGH,” Miya said as she put her hand up to the computer screen during the video conference. Check it below:

Oh, she had the right one with Gayle.

During the interview, Miya said she’s Puerto Rican, so her attack wasn’t racist.

Ponsetto: So, I arrived back to the hotel after grabbing some Starbucks. I had noticed my phone had been missing. So I just approached the hotel manager, asked him if he could kindly just check the footage. In my opinion, I was, like, “Okay. Any person walking down could possibly be the person that might’ve had my phone.” I wasn’t racial profiling whatsoever. I’m Puerto Rican. I’m, like, a woman of color. I’m Italian, Greek, Puerto Rican.

King: You keep saying you’re Puerto Rican. Does that mean that you can’t be racist because you’re saying you’re a woman of color? Is that what you mean?

King: Well, I would disagree with that. People of color can be racist too. Do you believe that you should pay a price for this?

Ponsetto: I don’t feel that my accusation is a crime.

As she continued, Miya said the 14-year-old Black boy isn’t the only victim because she was traumatized as well. Oh? How so? She claims her big 22-year-old self has lived the same amount of “life” as a 14-year-old boy.

King: Miya, to be honest, I’m telling you, you seem to be not remorseful, to have no contrition. That you’re almost a little flippant about this. You have to understand, for this teenage boy who says that he was shattered, who said that he was traumatized, this is a big deal.

King: You’re traumatized too because?

Ponsetto: Yeah, and I’m sorry. I’m sorry from the bottom of my heart. He is honestly — he’s 14? That’s what they’re claiming? Yeah. I’m 22. I’ve lived probably just the same amount of life as him. Like, honestly. I’m just as a kid at heart as he is. I feel sorry that I made the family go through, like, all of that stress. But at the same time, it wasn’t just them going through that.

Well, there wouldn’t be anything to “go through” had she kept her hands to herself. Miya’s attorney said she prepared Miya for the interview, but she “went off script,” disregarding the advice she was given. Her attorney said she wanted her client to feel empowered to tell her own story.

Peep the rest of the interview below:

During her arraignment, it appears Miya had a public defender and was no longer being represented by attorney Sharen Ghatan:

After that interview, we don’t blame the attorney.

Keyon Harrold Jr.’s parents reacted to Miya’s “apology” and said it she didn’t seem genuine. We’d have to agree.

”I’m happy that she has been arrested, but that’s only the first step in a very big conversation that needs to happen here in America that has to do with racial profiling. If I had done what Miya Ponsetto did to my son, I would be in jail,” Keyon Sr. said.

Where is the lie? Check out their reaction above.

Right now, Miya is out on bail post-arraignment and has to be back in NYC for another court date on March 29th.

Oh, and get this…

Turns out, Miya Ponsetto doesn’t like obeying the law. She currently has an outstanding DUI case in Ventura County from October 2020, which is her SECOND DUI in the last four months. A black woman with these charges would be behind BARS. Peep a clip from the arrest above.

TMZ has the deets on the arrest above:

TMZ obtained video of that arrest, where she was kicking and screaming as cops tried to subdue her. At one point she screamed, “There are gang members are killing people right now and you’re arresting a girl?!” She’s pled not guilty.

She’s currently on probation for a DUI she got back in May in Malibu, and these new criminal cases could end up triggering a probation violation, that could land her in jail for as long as 6 months.

But, that’s not all. Miya and her mom were both arrested for being drunk in public at the Peninsula hotel in Bev Hills. She has a court date for that case at the end of the month.

If they don’t stop playing in our faces and lock this woman up! 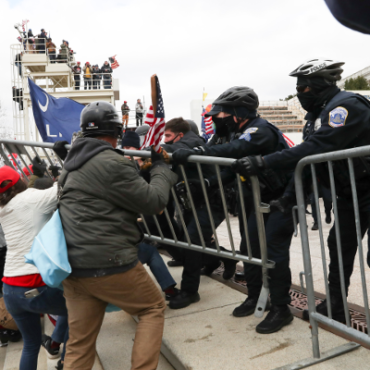 Was The Failed Capitol Coup An Inside Job? Here’s Why The FBI (And Everyone Else) Believes It Was

As more details and videos from the day Trump supporters’ attempted insurrection come trickling in, there’s speculation that the event was an “inside job.” Police were seen letting people past barricades and people are questioning how the rioters found the offices of certain Congressman and women. More inside… On hell literally broke loose when Trump supporters descended on the U.S. Capitol for a coup attempt as Congress was counting up […]