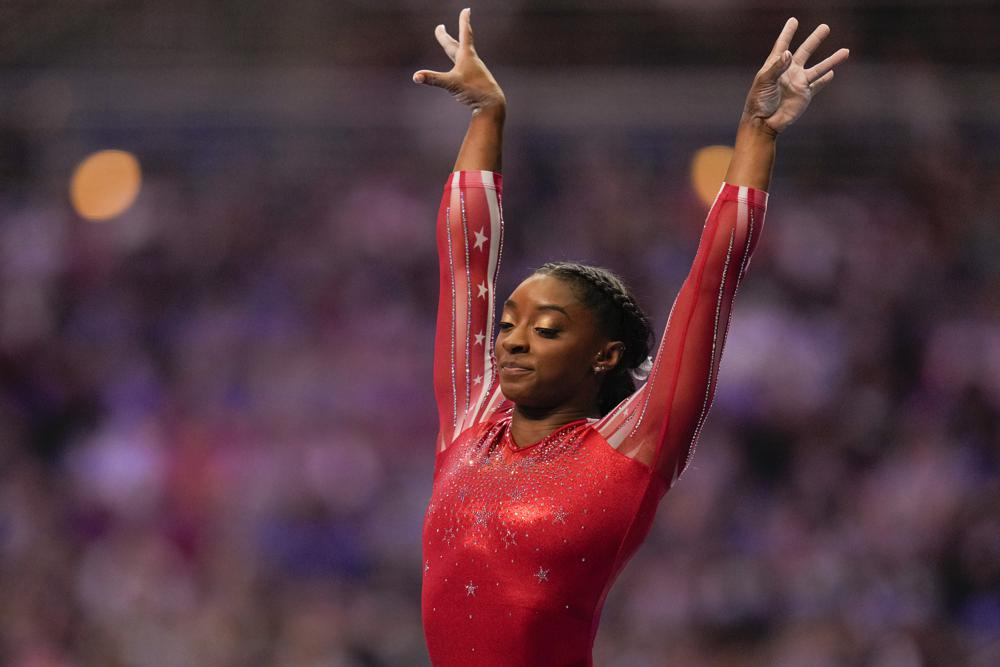 Gymnast Simone Biles isn’t the only goddess set to represent the U.S. in the upcoming Tokyo Olympics. Inside are a few breakout stars and new record breakers that you’ll want to keep a tab on during the Games…

#BlackExcellence will be all up and through Tokyo soon!

such a surreal feeling. I can’t believe I made the olympic team for a 2nd time & I’m beyond excited to represent Team USA.

This is just the beginning of the journey.

thanks for all the endless support & love. I couldn’t ask for better support pic.twitter.com/oL9M1dPmH0

Gymnastics GOAT Simone Biles is set to take over the the upcoming Tokyo Olympic Games after tumbling through the trials like the GOAT that she is.

The 24-year-old Olympic gymnast – who won four gold medals at the 2016 Olympics in Rio de Janeiro – secured her spot on the United States Gymnastics team over the weekend during the trials in St. Louis.

“I kind of got in my head today and started doubting myself,” Simone told the media. “And you could see that in the gymnastics. But just go home, work harder. This is just the beginning of the journey.”

I just want to say thank you from the bottom of my heart this is just the beginning of the journey!

Simone’s all-around score of 118.098 was more than two points ahead of Sunisa Lee, who secured the second spot. Gymnast Jordan Chiles – who works out at Simone’s gym – will compete in Tokyo, along with Grace McCallum, MyKayla Skinner and Jade Carey.

appreciation post for my sweet parents thanks for making sacrifices since day 1 so I can live out my dream. but most importantly thanks for always being there for me through all the highs and lows. You guys are the absolute best. I love y’all pic.twitter.com/jb45RdZoY3

Another YBF chick slaying before the Olympics…

If you haven’t heard by now, sprinter Sha’Carri Richardson is definitely one to watch during the Games.

Considered the fastest woman in America, the 21-year-old Dallas native is set to compete for gold in the women’s 100 meters during the Tokyo Olympics. Last week, she dominated the 100-meter race at the U.S. Olympic Track and Field trials in 10.64 seconds. And then she did it again during the 100m final in 10.86 seconds, securing her place at the Tokyo Olympics. Not only did she secure her spot, she made history as the fastest woman in America.

Flo Jo vibes for sure.

“I’m highly blessed and grateful… My family is my everything. My everything until the day I’m done.”

Sha’Carri Richardson with so many emotions after earning a spot on the U.S. Olympic Team.@usatf | #TrackFieldTrials21 x #TokyoOlympics pic.twitter.com/8ujBpBSwVC

We LOVE to see it. Congrats!

Continuing the queendom at the Tokyo Olympics…

Gabby Thomas finished the women’s 200 meters at the U.S. Olympic track and field trials in 21.61 seconds, breaking a new record and earning her spot at the Tokyo Games.

“21.61 seconds- best to ever do it behind FloJo,” she captioned on Instagram. “AND IM AN OLYMPIAN!!!!!! So so so grateful to everybody-especially my coach. Sending love to everyone who has supported me up to this point and to my new supporters. We’re just getting started,” the 24-year-old athlete said.

Her win made her the second fastest runner of all-time coming in after world-record holder Florence Griffith-Joyner, who secured a record time of 21.34 seconds during the 1988 Olympic Games in Seoul.

Supermoms Allyson Felix and Quanera Hayes qualified for the Tokyo Olympics after competing in the 400m dash two years after giving birth! Sheesh.

After securing their spots, they brought out their kiddies out on the track and they shared a super sweet moment that has our ovaries in shambles:

Quanera shared a heartfelt IG post about her bond with Allyson Felix and how she has inspired her:

“When people hear your name they think; greatest female athlete, most decorated track athlete, the legend, the goat etc. Yes, all those things are in fact true but people tend to overlook something that’s far greater than all those titles,” Quanera wrote. “You are a woman of Faith. God has truly had his hand on you and your entire career. Through the ups and downs you remained strong, you remained faithful and you continued to trust Him. I thank God for giving you this platform. Over the years it has become more than just running. Thank you for using your voice to speak up for mother’s and pregnancy. Where would I be if it wasn’t for your voice. I know this has made you so much stronger than you could’ve ever imagine.”

“You have been to MANY Olympics but this one is far more special than any of the others. This is your last go but your first as a mom. I’m so honored to have the privilege to share this moment with you! It’s crazy to me that I first met you in 2013 as a DII college athlete to now about to run in the Olympics together. This is far beyond anything I thought I would be able to say back then. You are truly leaving your mark on this sport and the world. I pray for your continued blessings off the track. I know God will continue to use you!! Continue to let your light shine and your voice be heard!! “

Aww! We LOVE to see the sisterhood.

Raven “HULK” Saunders finished second in the shot put after a record-breaking performance during the U.S. Track and Field Olympic trials, which earned her a spot on Team USA at the Tokyo Games.

Raven – who competed in an Incredible Hulk mask – secured a personal best throw of 19.96, which helped her secure a spot on the U.S. Olympic Team for the second time.

Saunders’ throw set a new meet record for the U.S. Olympic Trials, until Jessica Ramsey responded with a throw of 20.12 meters (66 feet, 1/4 inch) to win the event and set a new record.

“Honestly, if I could have lost to anybody, I’m happy it was Jessica,” Saunders told media after the event. She and Ramsey are former training partners.

“I’m happy for her, happy for myself. We were pumping each other up. It was great to make that magic again,” Saunders added.

After making the team for the 2nd time, she celebrated on social media:

Thank you to everyone who has helped me to this point. You know who you are. WE GOING TO TOKYOOOOOO!!!!!! #BlackGirlMagic

Congrats to ALL of the ladies, including hammer thrower Gwen Berry. Oh, you missed what she did?! Check it out HERE.

#BlackExcellence will be sprinkled all over the Tokyo Games when they start Friday, July 23rd! We’ll be tuned in, will you? 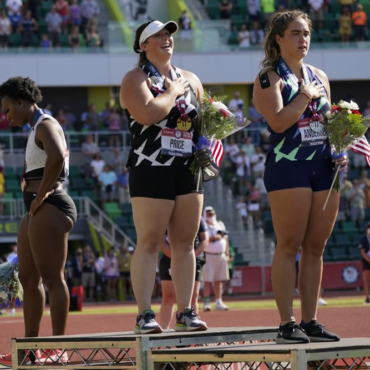