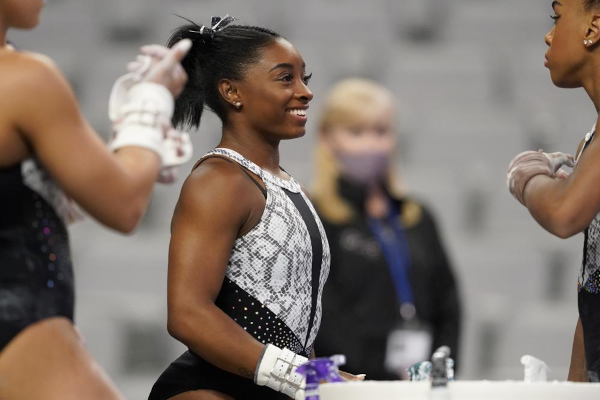 Simone Biles proves – yet again – why she’s the Greatest Of All Time (G.O.A.T.). The 24-year-old just won her 7th U.S. Gymnastics title ahead of the Tokyo Olympics. Celebrate with the GOAT inside…

Simone Biles flipped and tumbled her way to a record seventh U.S. Gymnastics title on Sunday in Fort Worth, TX. And she made it look effortless.

The 24-year-old five-time Olympic medalist pushed her way up to a score of 119.650. And her floor routine certainly helped to get her there. Flexing her skills to a song from Fast and Furious: Tokyo Drift, the bomb gymnast included a “never-been-done-before” move called “The Biles.”

Of course, she nailed it.

Watch her work below:

The gymnast blueprint in action.

The Houston native surpassed Clara Schroth Lomady’s previous record of six, solidifying why she’s at the top of her sport. Simone is now tied with Alfred Jochim for the most titles won by ANY American. We love how she’s dominating the sport and letting folks know she’s going to push boundaries as an athlete because, she can.

Watch more from her performances below:

Last month, Simone – who is the most decorated American gymnast in history – became the FIRST woman to land a Yurchenko double pike in competition at the U.S. Classic in Indianapolis.

During her performance, she rocked a white leotard which featured a GOAT made out of rhinestones. Her fans have since named it “Goldie.”

The leotard is a part of her collection with GKElite. She said she designed the leotards herself to inspire athletes around the world to become the “Greatest Of All Time.” We love it.

Gymnast Jordan Chiles – who works out at Simone’s gym alongside several other 2021 Olympic hopefuls and is surely getting some training from Simone herself – is considered an early favorite for the Olympic team. She won 2nd place at the U.S. Classic in Indianapolis. Congrats!

For the first time, Simone’s NFL player boyfriend Jonathan Owens watched her compete in-person. He was in awe of her talent, writing on Instagram, “What an amazing experience. First time getting to watch you compete in person and you didn’t disappoint. It’s so cool that i get to watch you do what you love, and be the best at that. I’m so proud of you my lil champ Trials up next and you already know I’m there!! Love you baby.”

Simone responded, “I love you so much I’m so happy you got to come watch while in the middle of OTA’s you a real one.”

Next up? Olympic trials kick off in three weeks. The two-day competition will go down in St. Louis.

While some fans weren't pleased with the Floyd Mayweather vs. Jake Paul fight that's the least of Floyd's concerns. The undefeated boxer is laughing all the way to the bank as he scooped up a crazy bag after the fight. Find out how much he made, plus who was in the mix to watch the fight live inside... From famed boxer to legal bank robber! No, really. Floyd Mayweather should probably write a link up with someone to write a […]