These hit dogs are HOLLERING! And Sheryl Underwood is giving a masterclass in self-control when she was confronted by her friend/”The Talk” co-host Sharon Osbourne who’s defending alleged racist, Piers Morgan, after his criticism of Meghan Markle. Watch the ladies’ heated conversation inside…

Major props to “The Talk” co-host Sheryl Underwood on keeping it classy after being disrespected on national television.

Yesterday, the ladies on “The Talk” did a segment reacting to “The Talk” co-host Sharon Osbourne showing support for British journalist Piers Morgan. If you haven’t heard, Piers stormed off “Good Morning Britain” as weatherman Alex Beresford called him out for his strong criticism of Meghan Markle following her and Prince Harry’s interview with Oprah. His temper tantrum cost him his job as ITV confirmed his departure.

After it was announced Piers QUIT, Sharon Osbourne hopped on Twitter to show her support:

. @piersmorgan I am with you. I stand by you. People forget that you’re paid for your opinion and that you’re just speaking your truth.

”@piersmorgan I am with you. I stand by you. People forget that you’re paid for your opinion and that you’re just speaking your truth,” she tweeted.

When stuff like this happens, true friends run towards you, fake friends run away. I love Sharon Osbourne because she always stays true to herself.
She knew she would get abused by the woke brigade for tweeting this – but did it anyway because it what she believes. https://t.co/gYnSwXZsUe

”When stuff like this happens, true friends run towards you, fake friends run away. I love Sharon Osbourne because she always stays true to herself. She knew she would get abused by the woke brigade for tweeting this – but did it anyway because it what she believes,” he tweeted.

During the show, Sheryl asked Sharon to comment on her defending her friend, Piers, explaining that Sharon’s defense gave “validation and a safe haven to something that he has uttered that is racist.”

“I support him for his freedom of speech, and he’s my friend,” Sharon said. “I’m not racist…I don’t care what color or what religion anyone is. Are you a nice person? That’s what I judge you on.”

“I don’t know what he’s uttered that’s racist. I’m not trying to slide out of this one. Tell me, what has he uttered that’s racist?,” Sharon responded. “I feel like I’m about to be put in the electric chair because I have a friend who many people think is racist, so that makes me a racist.

“For me at 68 years of age to have to turn around and say, ‘I ain’t racist,’ what’s it got to do with me? How can I be racist about anybody … or anything in my life? How can I?”

Sheryl tried to defuse the situation as tensions started boiling over. As the show went into the commercial break, Sharon was heard shouting expletives (that the show censored).

When they came back from commercial break, Sharon was visibly upset, wiping tears from her eyes. And then she got disrespectful.

“I will ask you again, Sheryl. I’ve been asking you during the break. And don’t try and cry because if anyone should be crying, it should be me. This is the situation: You tell me where you have heard him say racist things. Educate me.”

At this moment – Sheryl could have went OFF on Sharon for talking to her the way she was and demanding she not cry (even though SHE WAS), but she didn’t do that. She kept it classy and explained it was Piers’ “implication and the reaction” to Meghan & Harry’s interview that upset folks.

“I have felt that Piers was racist in his stance against Meghan Markle, and the last time he was on this show I said as much,” Sheryl responded.

Sheryl also made it clear that she was not alluding that Sharon was racist because she was taking up for her friend.

“To not want to address that because she is a Black woman, and to try to dismiss it or to make it seem less than what it is that’s what makes it racist,” Sheryl said. “But right now, I’m talking to a woman I believe is my friend and I don’t want anybody here to watch this and think we are attacking you for being racist.”

Welp. Who’s fault is that, Sharon?

Peep their heated exchange below:

I absolutely commend Sheryl Underwood & Elaine Welteroth for holding their composure listening to Sharon Osborne gaslight racism on #TheTalk. She made this about her when it has NOTHING to do w/ her feelings. Plus she was rude & continued to dismiss them trying to educate her pic.twitter.com/5aVlCXllSQ

Twitter users began sounding off on the clip, calling out Sharon for being out of line:

This is Sharon Osbourne, telling a black woman not to cry and demanding a definition of racism, as she sobs over Piers Morgan who walked off his job bc a mixed black coworker calmly challenged his fixation on Meghan Markle. White women are something else. Your tears are weapons. https://t.co/mJJ7luZ8YD

“This is Sharon Osbourne, telling a black woman not to cry and demanding a definition of racism, as she sobs over Piers Morgan who walked off his job bc a mixed black coworker calmly challenged his fixation on Meghan Markle. White women are something else. Your tears are weapons,” comedian/TV writer Rae Sanni reacted.

PS- Crying to racists about how their actions have hurt you is pointless…you are NOT HUMAN to them.

“Sharon Osbourne is a perfect example of why it is futile to go out of your way to NOT call someone racist. You can’t reason with or educate them. Just say it with yo chest, let them sit with that and go on about your business,” @blackwomenviews responded.

One user gave props to both Sheryl and “The Talk” co-host Elaine Welteroth on how well they handled the situation on live television.

Kudos to Elaine and Sheryl for trying to lower the temperature. They should be the ones who are angry at the way Sharon Osbourne is speaking to them. #TheTalk

“Kudos to Elaine and Sheryl for trying to lower the temperature. They should be the ones who are angry at the way Sharon Osbourne is speaking to them,” @mmillipied tweeted.

No one should be surprised by Sharon Osbourne’s behavior. She has been consistently loud in her willful stupidity (about race) throughout the years.
The public gaslighting might be a new lil twist tho.

Black women should not have to deal with this. This is horrendous and violent. And when Sheryl seems to get upset Sharon mocks her and says she is the one that should be upset. This is the violence of “casual racism” in action https://t.co/MGxDZODv3g

The number one thing that has bothered me about this episode is Sharon telling Sheryl she isn’t aloud to cry. She is calmly trying to explain to you her opinion and is upset that your upset and yet you tell her she can’t express her feelings, but you’re free to? #TheTalk

And I put the “” because…does it look like she’s talking to a friend? My friends don’t talk to me like that. Even difficult convos. I understand she’s on tv but all of them are & Sharon built the system the Kardashians were able to build on. She knows tv. She espc knows…

Shoutout to Sheryl and Elaine for serving up a masterclass in self-control because we’re not sure we could have done the same. In the year of our Lord 2021 where Google is free and thorough, folks have to start educating themselevs first before DEMANDING people wthout their privilege to “teach” them things. Thoughts? 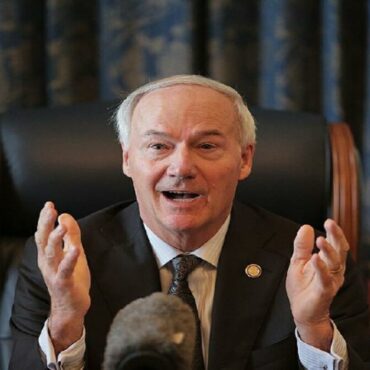 The bill bans all abortions except those to save the mother’s life in a medical emergency and is on schedule to go in effect at the end of August. What We Know: Republicans intend to put pressure on the Supreme Court to revisit the case Roe v. Wade, which is responsible for legalizing abortion nationwide. Governor Asa Hutchinson recently signed into legislation a law that bans nearly all abortions in […]