Shall We Plan A Watch Party? ‘Harry & Meghan: Escaping the Palace’ Is Coming To LIFETIME

Looks like we’re planning a watch party! Prince Harry & Meghan Markle’s royal exit will be the subject of an upcoming LIFETIME movie, the follow-up to the network’s two previous movies about the couple. Deets inside…

Prince Harry and Meghan Markle’s exit from the British Royal Family sent shockwaves across the world. Now, their royal exit will be turned into a LIFETIME movie, which is the network’s third movie about the couple.

”Harry & Meghan: Escaping the Palace” was just given the greenlight almost a year after first revealing that the second sequel in its royal franchise was in development.

According to LIFETIME, “Harry & Meghan: Escaping the Palace” will reveal what really went down behind-the-scenes inside the palace that forced Meg & Harry to leave everything behind for good in order to create the life they want for themselves and their son, Archie (along with their new bundle of joy on the way).

It will detail Meghan’s growing isolation and sadness, their disappointment that ‘The Firm’ was not defending them against the press’s attacks and Harry’s fear that history would repeat itself and he would not be able to protect his wife and son from the same forces that caused his mother’s untimely death. Harry & Meghan: Escaping the Palace will also look at the private family feuds between Will and Harry, Kate and Meghan, and Harry with Will and Charles, that lead to the ultimate break from the royal ties.

We’d love to find out how that “skin color” conversation was brought up and WHO actually said what. Everyone seems to have their thoughts about who was concerned with “how dark” Archie’s skin would be after Meg & Harry made the revelation during a candid interview with Oprah.

The third movie will debut later this year.

So, when they release the date, are y’all joining us for a watch party or nah? 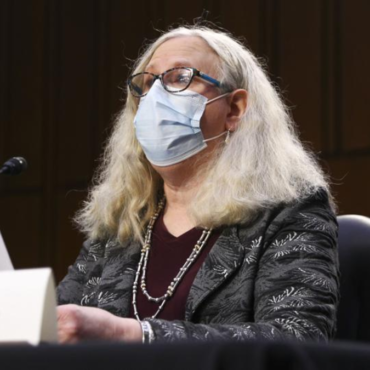 Dr. Rachel Levine will serve as assistant secretary of health in the Department of Health and Human Services. What We Know: On Wednesday, the U.S. Senate elected Levine in a 52-48 vote. Politicians from both parties voted in Levine’s favor. Important voters included Sen. Lisa Murkowski (R-Ak) and Sen. Susan Collins (R-Me). The election comes at a difficult time for the transgender-rights movement. Recently, legislatures across the country, the majority […]