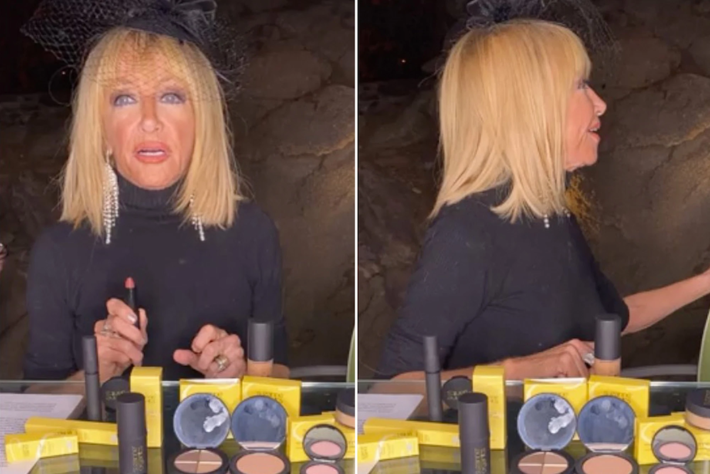 Suzanne Somers had a scary encounter with a nearly naked man in her California home on Friday night  — all while she was in the middle of a Facebook Live moment with fans.

Luckily one of the fans watching the show called the cops after the trespasser could be heard telling the star he was being “followed by ghosts.”

The star, 74, was doing a contouring demonstration for her organic makeup line, and was filming outdoors on her Palm Springs property when the segment took a dramatic twist.

In the live clip, Somers suddenly is seen asking her producer husband, Alan Hamel, “Is somebody here?”

Hamel says the noise is just a frog, but Somers adds, “I think I heard a voice.”

In the video, she calls out into the darkness, “Are you here?” A man responds, “I’m here!” And Somers calmly says, “Oh you’re here… come over here.”

But she then realizes that the guy is definitely not one of her guests.

The man, who sounds like he’s slurring his words, tells her, “I was slightly terrified over there for a second,” and when Somers asks why — he strangely tells her, “there were ghosts following me.”

Somers told Page Six that the man also told her he thought the sound of that frog overheard croaking in the clip was “the devil.” He also offered her an unspecified “gift,” which she declined.

“How did you get here?” Somers asks in the clip — remaining cool as a cucumber during the ordeal — and the man tells her, “A friend led me up this hill, and then I came down.”

She then says, “You shouldn’t be here. This is our house.”

Displaying her enduring sense of dramatic timing, the actress then looks into the camera wide-eyed for her fans.

She and Hamel told us that it was at that point that one of the fans watching the show who lives in the area called the Palm Springs, Calif., police.

Somers next tells the unseen intruder in the clip, “You don’t scare me.”

He then bizarrely tells the couple that, “I’ve seen pictures of this house before…I didn’t realize this was a property… I apologize.”

When Somers says, “I am doing a show here,” the man tells her, “I do a show everywhere, all day long.”

Somers then tells him, “I’m not used to [people] being on our property. So can you go home? You seem like a very nice person, but you shouldn’t be here.”

She finally has Hamel and others help escort the looney interloper off the property, ending the harrowing visit.

“I’m going to call the police now. What a way to end the show.  You learned all about makeup, and how to contour, but I need to go,” Somers says in the video.

“I was expecting dinner guests; that’s why I was so friendly at first. [But] when he came closer, he barely had any clothes on.”

The man was wearing, “flip flops or a bathing suit, or a bikini.”

She added of her comedic turn to the camera during the drama: “I had a few hundred thousand people watching, and I wanted to keep them calm.”

(Clearly the guy also didn’t get the memo that it was “Formal Friday” on Somers’ Facebook Live show: The star herself was wearing a black cocktail dress and fascinator.)

Hamel hypothesized to us that the man was a lost hiker, telling us, “Oftentimes people come to Palm Springs …. they go hiking, and they don’t take any water.

“This guy obviously got lost… He was odd, he was very odd. But he wasn’t threatening — like get whatever you have to defend yourself and head for the hills.”

He said he thought the man saw the lights from their show and wandered towards them while trying to get back to town from a mountain trail.

They said that the unexpected visitor seemed to be using one of the “solar lights” on their property as a flashlight.

Apparently cops later caught up with the guy and warned him he couldn’t go onto people’s private property, the couple said.

“It’s very hard to get to the house,” which sits on 28 acres, the couple said.

Somers and Hamel have lived in the home since 1977.

They recently put it on the market for $8.5 million. They originally purchased the home for $420,000. The pair have been packing up their things and donated thousands in clothes dating back to the ’70s to a local charity thrift shop.

Somers quipped to us of the incident, “Maybe it was God’s way of saying, ‘Time to go.’”

Somers also said of staying calm under pressure, “I’ve written several books about being a child of an alcoholic… one thing that happens, you either crumble from it, or you become crisis oriented.

“When things get crazy you want to be around someone like me.”

She added, “But when it was all over, I was feeling my feelings.”

Thank God it ended the way it did — because the way people are set-up these days we could be here writing about a much more tragic story. 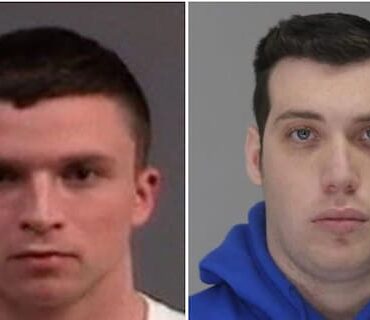 Robert Joseph Scianna Jr., 25, and Mitchell Ryan, 23, two cheerleaders who appeared in the Netflix docuseries Cheer, have separately been charged with alleged offenses relating to sexual misconduct with minors this week. via: Uproxx Cheer was an instant hit when it was released on Netflix in early 2020, the documentary series even garnering an SNL sketch of its own. But the story of the cheerleaders from Navarro College in […]