Kentucky police rescued a missing North Carolina teenager on Thursday after a driver on Interstate 75 noticed her in a silver Toyota, making hand signals made popular by  TikTok to denote distress.

Police arrested James Herbert Brick, 61, of Cherokee, North Carolina, just after 12:30 p.m. and charged him with unlawful imprisonment – first-degree, and possession of material showing a sexual performance by a minor based on what they found on his phone.

The girl’s parents in Asheville, North Carolina, had reported the 16-year-old missing the previous Tuesday. While Brick and the girl were acquainted and she had initially gone with him willingly, she got scared, she told police.

“I think she started fearing for her life,” Deputy Gilbert Acciardo, spokesman for Root’s office, told the Lexington Herald-Leader on Friday.

Her rescue was thanks to a savvy driver who was behind the car she was riding in who “noticed a female passenger in the vehicle making hand gestures that are known on the social media platform Tik Tok to represent violence at home – I need help – domestic violence,” Laurel County Sheriff John Root said in a statement.

The caller said she “appeared to be in distress” and noted that a “male subject” was behind the wheel. The caller, who police did not identify, followed the Toyota and updated emergency responders on the location until it exited the highway and police pulled it over.

It was then that they learned of the girl’s “missing” status and confirmed it was her.

“The female juvenile told Sheriff’s investigators that she had gotten with the male subject and traveled through North Carolina, Tennessee, Kentucky and into Ohio where the accused had relatives,” police said. “When the male subject’s relatives realized that the female in his custody was underage and reported missing, the accused left Ohio traveling southbound and the female juvenile then began attempting to get motorists attention to call 911.”

Deputies found a phone in Brick’s possession that depicted an underage female in a sexual manner, which led to the second charge, police said. Brick was booked into the Laurel County Correctional Center on a $10,000 bond. Arrangements were being made to return her to her parents, police said.

The distress signal, started by the Canadian Women’s Foundation at the start of the coronavirus pandemic in 2020 to help domestic abuse victims trapped indoors, consists of tucking your thumb into an open palm and folding your fingers over the thumb.

TikTok is out her saving lives, y’all. 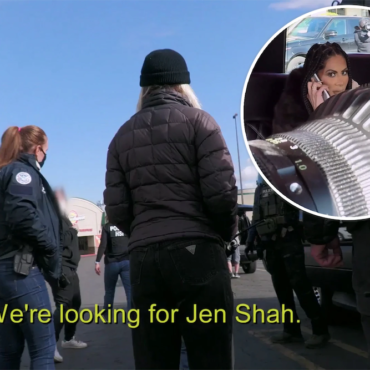 The highly-anticipated ‘SHArrest’ is upon us. On Sunday night’s episode of The Real Housewives of Salt Lake City, Jen Shah’s legal troubles finally began to play out on television. via People: After the drama-filled luncheon when cast members Mary Cosby and Whitney Rose went head-to-head, the ladies were looking forward to a getaway to Vail, Colo., organized by Meredith Marks. On the morning of the trip, Heather Gay arrived first at […]