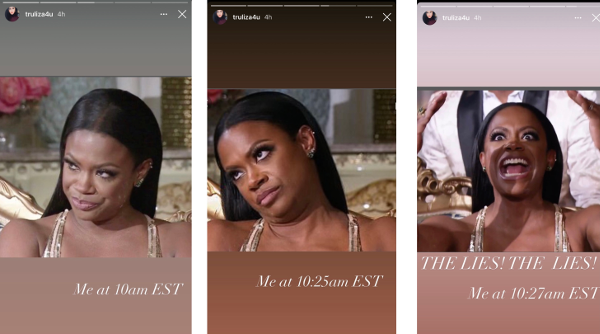 Lamar Odom is spilling tea again and this time he’s dropping bombs about how he cheated on his ex-fiancée Sabrina Parr and revealed another NBA star she has had sex with…allegedly. He claims he has always given her the side-eye because she had sex with his ex-wife Khloe Kardashian’s baby daddy, Tristan Thompson. Messy much? More inside…

Lamar Odom isn’t holding anything back when it comes to his failed relationship with fitness guru Sabrina Parr. And he’s dragging his ex-wife Khloe Kardashian and her NBA baby daddy Tristan Thompson into the mix.

The scolding hot tea came early today when LO appeared via video conference on “The Wendy Williams Show” to chat about his failed relationship.

“Yeah, she is good looking, but she’s a hurt woman. She has a lot of problems that I don’t think anyone of us could help her with. She probably needs therapy,” the retired NBA player said.

The 41-year-old said he knew about her criminal past, but he wanted to give her an opportunity to reform her behavior…except things didn’t go as he planned.

”That whole relationship…she’s just like a decrepit reptilian type of woman how she moves,” he explained.

LO – who almost died in a brothel after a reported overdose in 2015 – said he’s just trying to be honest about the relationship and that he has no problem exposing her because she tried to hurt him by putting out stories that he’s on drugs again.

“Anyone who does that to me, of course if you know my past, that means you’re trying to hurt me, my progression, my lifestyle,” he said. “So I kind of take that personal. If you really want to hurt Lamar’s feelings and all that, put the drug things on him and she should know that.”

Then, LO started dropping some bombshells about Sabrina allegedly sleeping with Tristan Thompson, who is his ex-wife Khloe Kardashian’s baby daddy.

When the daytime talk show host asked if he cheated, the former Lakers baller admitted he did.

”Did you cheat on her Lamar? Sabrina?,” Wendy asked.

”I did, but to be honest with you, there were some things that kind of always made me kind of look at her in the corner of my eye. Like when she told me that she had slept with my ex-wife’s significant other,” he said.

Wendy seemed befuddled, however, connecting those dots were THAT hard. He only has one ex-wife…

.@RealLamarOdom opened up about his tumultuous relationship with his ex #SabrinaParr. Take a look Tune in to the Wendy show TODAY to watch more of his interview. pic.twitter.com/C3ofLwiazG

Below is the full interview:

As you noticed, Lamar didn’t provide a timeline of when Sabrina allegedly slept with Tristan. However, new reports suggest she had a situationship with the Boston Celtics baller way before he got with Khloe – nearly a decade ago – and that the “Keeping Up With The Kardashians” star already knew about it.

TMZ has the deets (y’all know who provided the timeline):

Sources with direct knowledge tell TMZ … Tristan and Sabrina hooked up nearly a decade ago, during Tristan’s rookie season in the NBA. TT was 20 years old at the time and was playing for the Cleveland Cavaliers, Sabrina’s hometown team.

Our sources say when Lamar and Sabrina first went public with their relationship in 2019, Tristan told Khloe about his past with Sabrina … so Lamar’s bombshell is nothing new to Khloe.

What’s interesting is that Lamar’s ex-manager Zoul El Fassi revealed in 2019 that Sabrina allegedly slept with Tristan and said he felt she was with him for the wrong reasons.

Back in November, Sabrina announced she and Lamar were calling off the engagement (after he popped the question in Nov. 2019) because the former NBA baller had some issues he needed to work out. She said she called off their engagement because LO slipped back to his old, dangerous ways. The fitness trainer didn’t specify exactly what issues he needs to work on, but appeared she was alluding that he could have possibly relapsed.

Issues between the couple made it to social media when LO hopped on IG to reveal Sabrina had allegedly hijacked his social media accounts. That launched a social media feud between LO and Sabrina with both sides sharing receipts to prove the other one wrong.

We wonder if the breakup drama will be featured on their new reality series “Lamar & Sabrina,” which is now streaming on the For Us By Us network:

And we’ll likely find out how Lamar’s kids’ mother Liza Morales since she signed on to star on the new season of “Basketball Wives.”

Speaking of Liza, she reacted to LO’s interview on her IG Stories:

Dr. Dre was spotted out to dinner with a “mystery woman” last night amid his divorce from his estranged wife Nicole Young. Turns out, the woman the Hip Hop mogul had with him was none other than Omarion’s ex/kids’ mother, Apryl Jones. Oh? More inside… Looks like Dr. Dre is doing A-OK after he was admitted to the ICU due to a brain aneurysm he suffered last month. The Hip Hop mogul was spotted arriving and leaving BOA Steakhouse in […]