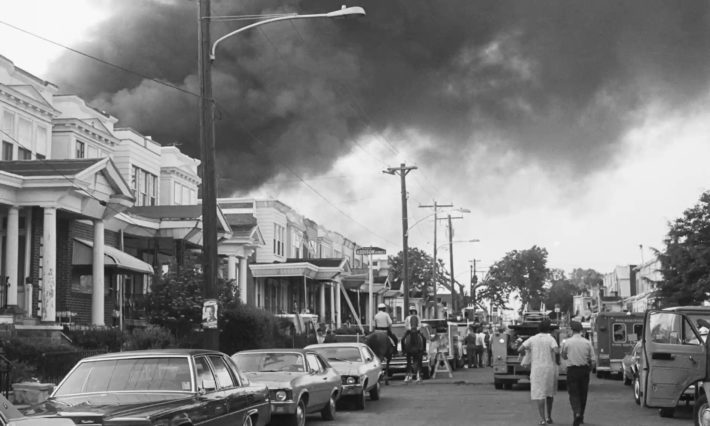 The bones of Black children who died in 1985 after their home was bombed by Philadelphia police during a confrontation with the Black liberation group are being used as a “case study” in an online forensic anthropology course presented by an Ivy League professor.

It has emerged that the physical remains of one, or possibly two, of the children who were killed in the aerial bombing of the Move organization in May 1985 have been guarded over the past 36 years in the anthropological collections of the University of Pennsylvania and Princeton.

The institutions have held on to the heavily burned fragments, and since 2019 have been deploying them for teaching purposes without the permission of the deceased’s living parents.

To the astonishment and dismay of present-day Move members, some of the bones are being deployed as artifacts in an online course presented in the name of Princeton and hosted by the online study platform Coursera. Real Bones: Adventures in Forensic Anthropology focuses on “lost personhood” – cases where an individual cannot be identified due to the decomposed condition of their remains.

It uses as its main “case study” the events of May 1985, producing as prime evidence a set of bones belonging to a girl in her teens retrieved from the ashes of the Move house at 6221 Osage Avenue in Philadelphia.

The revelation comes just days before Philadelphia stages its first official day of remembrance over the 1985 bombing, following a formal apology issued by the city council last year.

The disclosure, first reported by the local news outlet Billy Penn, also lands in the middle of a fevered debate over academia’s handling of African American remains that has been rocket-charged by the nationwide racial reckoning in the wake of George Floyd’s murder in Minneapolis last year by a police officer.

On 13 May 1985, Philadelphia police dropped a bomb from a helicopter on to the roof of a communal house occupied by members of Move, an organization that bore comparison to the Black Panthers combined with back-to-nature environmental activism. In the ensuing inferno, the Move house as well as the entire surrounding neighborhood was razed to the ground.

Eleven people linked to the group were killed. Among them were five children, aged seven to 14.

Last year the city apologized formally for the “immeasurable and enduring harm” caused in the bombing, paving the way to this year’s inaugural commemoration.

The forensic anthropology course in which the bones of a Move child are being used has almost 5,000 enrolled students. It was filmed in February 2019 and is taught by Janet Monge, an adjunct professor in anthropology at the University of Pennsylvania and a visiting professor in the same subject at Princeton.

The Move “case study” is broken up into five online videos, in which Monge relates the history of the 1985 catastrophe. In one video she picks up the bones and holds them up to the camera.

Monge describes the remains in vivid terms. They consist of two bones – a pelvis and femur – that belonged to a small girl probably in her teens that were discovered held together “because they were in a pair of jeans”.

The pelvis was cracked “where a beam of the house had actually fallen on this individual”. The fragment showed signs of burnt tendons around the hip joint.

“The bones are juicy, by which I mean you can tell they are the bones of a recently deceased individual,” Monge continues. “If you smell it, it doesn’t actually smell bad – it smells kind of greasy, like an older-style grease.”

The UPenn and Princeton academic does not inform her students that she is displaying the remains without permission of the girl’s family. She is, however, open about the tragic nature of the confrontation that led to the child’s death in Osage Avenue.

“It was one of the great tragedies, to witness the remains as they were found and moved from this location … I still feel unsettled by many aspects of it,” she says. She also shares with the class that Move continues to exist to this day: “The organization is still active in Philadelphia.”

The display of the human remains of a Black girl who would be in her 40s today had she survived the police bombing that took her life is certain to intensify the debate over the way the remains of Black people are handled by academia. The subject has been a talking point for decades, but has intensified in recent months following the mass protests over Floyd’s death.

The Move bones have never positively been identified. But given their small size and features, they almost certainly belong to one of the older Move girls who died in the inferno.

The oldest was a 14-year-old called Tree Africa (all members of Move take the last name Africa to denote their collective commitment to Black liberation). Michael Africa Jr, a Move member who was a friend of Tree’s and who was six at the time of the bombing, described her as a responsible kid who, as her name suggested, was passionate about climbing trees.

“When we went to a park, the first thing she would do is scout out the biggest tree. She was always the first one up, and she always went the highest,” he told the Guardian.

Tree’s mother is Consuela Dotson Africa. At the time of the fire she was serving a 16-year prison sentence related to an earlier police confrontationwith Move in 1978; she still lives in the Philadelphia area.

The other possible identification of the bones would be Delisha Africa, who was 12 in 1985. When she died, both her parents – Delbert Africa and Janet Africa – were similarly in prison in relation to the 1978 confrontation.

They were part of the so-called Move 9 who were each sentenced to 30 years to life for the contested shooting of a police officer.

Both Delisha’s parents were released from prison after more than 40 years behind bars. Delbert died last June, five months after he was paroled.

Neither Janet nor Consuela have commented on the revelation that their daughters’ remains are possibly being used to teach online anthropology courses. But it is understood that neither of them gave their consent for them to be used that way.

“Nobody said you can do that, holding up their bones for the camera. That’s not how we process our dead. This is beyond words. The anthropology professor is holding the bones of a 14-year-old girl whose mother is still alive and grieving,” Michael Africa Jr said.

Africa Jr said that the discovery of the online course just days before the inaugural day of remembrance of the 1985 bombing was “such a shame, such a tragedy. After 36 years we find out that not only were these children abused and mistreated and bombed and burned, they haven’t even been allowed to rest in peace.”

The precise sequence of events relating to the Move bones remains sketchy. For years they sat in a cardboard box at the Penn Museum, part of the University of Pennsylvania where Monge is the leading bones expert.

It transpires that a Penn anthropologist, Alan Mann, acquired the remains after he was asked in the immediate aftermath of the bombing to provide specialist advice to the Philadelphia medical examiner in an attempt to identify the fragments. Mann kept possession of the bones, and in 2001 took them with him when he transferred to Princeton.

The remains appear to have shuttled between the two Ivy League institutions until 2019, when Monge, who had worked closely with Mann over many years, filmed her online course using the pelvis and femur fragments.

Where the bones are now located remains a mystery. The University of Pennsylvania told the Guardian that a set of remains of two bones from one individual, who has never been identified, “have been returned to the custody of Dr Mann at Princeton University”.

But Princeton told the Guardian that it had only become aware of the issue this week and insisted it was not in possession of the bones. “We can confirm that no remains of the victims of the Move bombing are being housed at Princeton University,” a spokesman said.

Monge did not respond to Guardian inquiries.

The controversy over the Move bones comes just a week after Penn Museum apologized for the “unethical possession of human remains” in its Samuel Morton Cranial collection.

The collection was compiled in the first half of the 19th century and used by Morton to justify white supremacist theories; it contained the remains of Black Philadelphians as well as 53 crania of enslaved people from Cuba and the US, which will now be repatriated or reburied.

Anthropologists and historians have become increasingly sensitive to the issues around the handling of remains. Michael Blakey, professor of anthropology at the College of William & Mary, was involved in the first reburial of African American bones from the Smithsonian Institution, which took place a year after the Move bombing, in 1986, and involved the remains of Black Philadelphians.

In the 1990s he directed the development of the African Burial Ground in New York, which was turned into a national monument following the full involvement of the local Black community. “We decided then we would not conduct any research without the permission of the community, and we created the precedent for informed consent involving any skeletal remains,” Blakey said.

The Guardian asked Blakey for his reaction to the news that anthropologists were still deploying African American bones in their teaching to this day in the absence of community permission. He replied: “The United States continues to operate on the basis of white privilege. What you are seeing here is the scientific manifestation of that – the objectification of the ‘other’, and the disempathy that is socialized in a society in which whites assume that they have control.”

The misuse of Black remains for scientific purposes has a long history in America. In 1989, construction workers in Augusta, Georgia, discovered almost 10,000 individual human bones under the former premises of the Medical College of Georgia.

The fragments came from corpses that were sold to the college by grave robbers and taken from Augusta’s cemetery for impoverished African Americans. The college used them in medical training and dissections.

Samuel Redman, a historian at the University of Massachusetts Amherst and author of Bone Rooms: From Scientific Racism to Human Prehistory in Museums, said the discovery of the Move bones was all the more disturbing given how recently the deaths occurred.

“There are people alive who are affected by this, not just in an emotional way but in a trauma-inducing way that could be harmful. The notion of ‘do no harm’ should be part and parcel of our research and teaching – we need to wrestle with this problem much more completely.”

We are truly at a loss for words. You know they would NEVER sit around and use bones from first responders who died responding to 911. 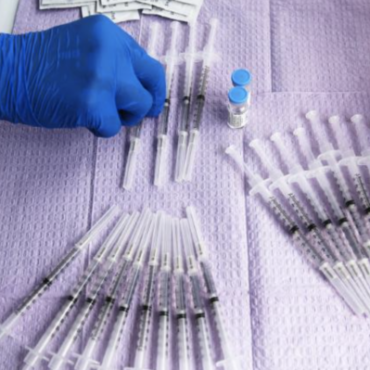 The Johnson & Johnson COVID-19 vaccine has cleared for use — again. via Complex: According to the New York Times, United States health regulators ended the pause on the single dose shot on Friday afternoon, after an advisory panel for the Centers for Disease Control and Prevention urged officials to resume its use. The vaccine was one of three shots that received emergency use authorization from the Food and Drug […]