Say What Now? A Man Who’s Suspected Of Murder Is Now On The Run With A Bengal Tiger, Police Said [Video] 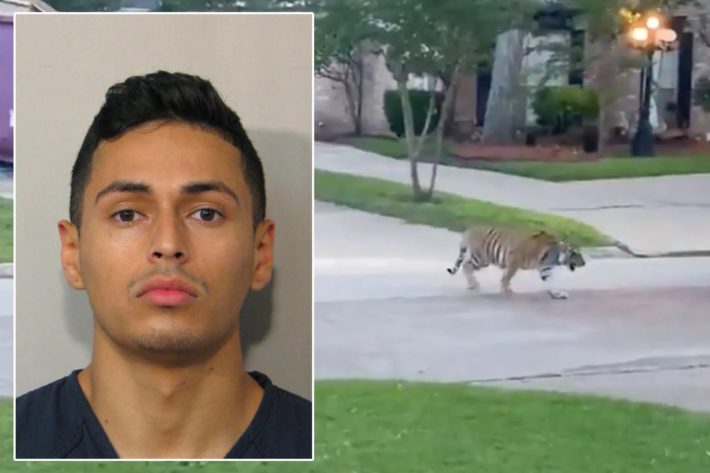 A man has been charged with felony evading arrest after he escaped from police while housing a Bengal tiger in his yard.

Houston police are searching for a 26-year-old man who fled from officers Sunday night with a Bengal tiger inside his SUV, authorities said.

Officers attempted to chase the white Jeep Cherokee but lost the vehicle. Now, police are looking for the tiger, its owner, and answers as to how the man — who has been charged in a separate murder case — got his hands on the exotic animal, which is illegal to own as a pet in the city.

“Obviously, if you see a Cherokee with a big tiger in it, it’d be good to call us,” Houston Police Commander Ronald Borza told reporters Monday.

Police were first notified about the animal on Sunday evening, when the app Nextdoor sent a notice to neighbors, Borza said. Posts on social media showed the tiger, which was wearing a collar, roaming freely on a residential street.

TIGER IN HOUSTON? A #KHOU11 viewer spotted one tonight and shot video of it. @JMilesKHOU has the story. https://t.co/48cvbN5PTz#HOUNews pic.twitter.com/DUX6RiJRlM

The animal was seen walking in the front yard of a home, at times lying down in view of neighbors. Eventually, one neighbor, an off-duty sheriff’s deputy, confronted the tiger at gunpoint as the animal slowly walked toward him across the street.

“No, sir. No, sir,” the deputy yells in one video as the tiger stalks him across the street.

The deputy told local TV station KHOU that the tiger did not appear to be aggressive, and he did not want to shoot it during the approximately five-minute confrontation.

“It did stalk me across the road, but it did not look super aggressive,” he told the station.

As the off-duty deputy attempted to hold the tiger at bay, the apparent owner came outside and attempted to take the animal back into the house.

“Fuck you and your fucking tiger,” the off-duty deputy told the man. “Get the fuck back inside right now.”

One video showed the man hauling the tiger back inside a house and dragging it by its collar.

As police began to arrive on the scene, the tiger’s owner then fled the neighborhood with the animal inside his SUV, authorities said.

Houston police later identified the man as Victor Hugo Cuevas, a 26-year-old who is out on bond.

Cuevas, Borza said, is currently facing an unrelated murder charge in Fort Bend County. The case was filed in November, but authorities did not release further details in that case.

Fleeing from the police and being in possession of the tiger could violate his bond terms, police said.

Police are seeking, in addition to Cuevas and the tiger, two monkeys he is believed to own.

A spokesperson for the Houston Police Department said it’s unknown where the monkeys are and whether Cuevas also had them in the SUV.

“We don’t know where the monkeys are,” Borza said. “My main concern right now is focusing on finding him and finding the tiger because what I don’t want him to do is harm the tiger.”

Monkeys are allowed in the city of Houston if they are under 30 pounds, he said, but tigers are not allowed within city limits.

He said police are investigating whether the tiger may be connected to a similar incident in 2019, when Houston police found another tiger living in the garage of a home.

“This is a small circle of people that deal with exotic animals,” he said.

Although rare, authorities in Houston are called about once a year regarding large exotic animals in the city, he said.

“It’s just not a good idea,” Borza said. “You never know when the animal’s gonna turn on you.”

The owner of the house where Cuevas was reportedly living told KHOU he was in the beginning stages of evicting his tenants, who had initially told him they owned no pets.

Who has a whole tiger as a pet?

The post Say What Now? A Man Who’s Suspected Of Murder Is Now On The Run With A Bengal Tiger, Police Said [Video] appeared first on LOVEBSCOTT. 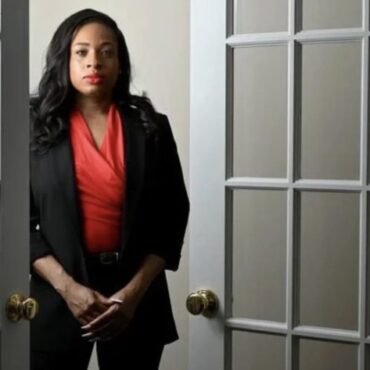 Charges against a Black driver who a Virginia State Police trooper removed from her car back in March have been dropped, as it was determined the trooper had no legal merit to detain her. via: Revolt According to The Washington Post, Juanisha C. Brooks was pulled over by Virginia State Police Trooper Robert G. Hindenlang while she was driving home back in March. Brooks asked the officer why she was […]