Say What Now? 2-Year-Old Boy Shoots Both His Parents with Gun Found on Nightstand A 2-year-old boy reportedly shot both of his parents in Maine after finding his parents’ gun laid out on a nightstand.

The child, who was also injured when the firearm recoiled, fired just a single shot.

The boy’s mother was shot in her leg and his father suffered a minor head injury Wednesday morning. All three were treated for non life-threatening injuries.

“How the boy was able to pick up and fire the weapon is of great concern and is being investigated,” Sheriff Joel Merry said.

There was also a 3-week-old baby in the room, according to WHME. That child is reportedly being looked after by its grandmother, who lives there too, but was away at the time of the shooting.

The incident happened in the small coastal town of West Bath, Maine. Merry called the situation “disturbing” and noted that it could have turned out much worse than it did.

News station WMTW reports the boy’s unidentified father is 25 and his mother is 22. That report also said the weapon was a handgun.

This family is lucky everyone involved in this incident survived.

The post Say What Now? 2-Year-Old Boy Shoots Both His Parents with Gun Found on Nightstand appeared first on LOVEBSCOTT. 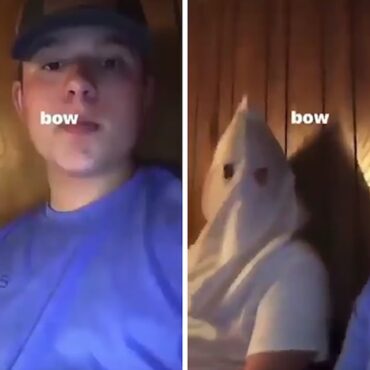 American Idol contestant Caleb Kennedy is no longer participating in the singing competition. His departure comes after a video surfaced of the South Carolina native hanging out with a friend wearing a white Ku Klux Klan hood. A spokesperson for the ‘Idol’ released the following statement: “American Idol contestant Caleb Kennedy will no longer be moving forward in the competition. Sunday’s episode will feature the Top 4 with one contestant […]