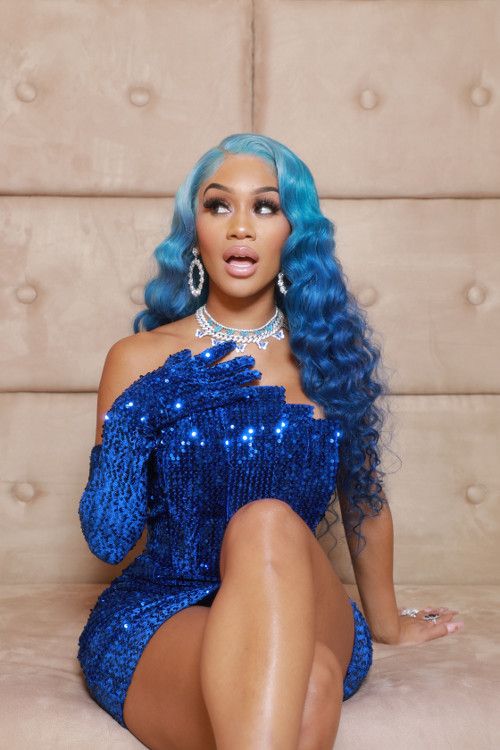 Before Saweetie could officially release her “Best Friend” video that features Doja Cat, Roc Nation group Ceraadi called her out over conceptual similarities. See the comparison and tell us what you think inside….

Last month, Saweetie called out her label – Warner Records – for prematurely releasing “Best Friend” to streaming services before she could do the roll-out she created for it.

I am extremely disappointed in my label WBR for prematurely releasing a single I was so excited about. I feel disrespected. I’m hands on with ALL of my creative & had such a dope rollout for “best friends”. The thirst for clout & $ is real & it overrides the artists’ art.

A day before the official release of the visuals, more drama behind the track was stirred up on social media.

In an Instagram post, Ceraadi shared comparison pictures and videos, captioning it with emojis and tagging Saweetie & Doja. In one of the screenshots posted, Ceraadi noted the lyrics to Saweetie’s song and the beat is similar to their track.

The duo also retweeted tweets on Twitter where fans also said the songs are similar.

Well the ICY GRL saw Ceraadi’s tag, so she hopped in her comments with some savagely sweet and sarcastic shade.

“Omg we’ll totallyyyy add you in the credz! MY IDOLS,” Saweete responded. Oop!

Saweetie’s ICY gang had her back:

Ceraadi better shut the fuck up I promise you NOBODY IS CHECKING FOR YALL’S KIDZ BOP MUSIC. Don’t ever speak on Saweetie’s name weirdos

WE BARK BACK BITCH ! @Ceraadi pic.twitter.com/nsxS3ixmsv

not ceraadi thinking Doja & Saweetie stole their concept of being bestfriends and sitting and standing in front of a car… pic.twitter.com/yHPeEPNZIL

Found out ceraadi supports trump and first thing I peep on insta when I go to unfollow them is they beefing with doja and saweetie saying they copied them. Hm.

Ceraadi on Instagram tryna shift the attention that they momma mighta been in that crowd that stormed in the Capital by saying Saweetie stole they idea for a song and video that been prepared. Sit down

Both videos give Thelma & Louise vibes. These young artists probably never even heard of them. Check out Saweetie’s “Best Friend” featuring Doja Cat & Ceraadi’s “BFF” videos below and tell us what you think:

Someone hand Trump a tissue.  After careful review, Twitter has permanently suspended Trump’s account. After close review of recent Tweets from the @realDonaldTrump account and the context around them — specifically how they are being received and interpreted on and off Twitter — we have permanently suspended the account due to the risk of further incitement of violence. … Overview On January 8, 2021, President Donald J. Trump tweeted: “The 75,000,000 great American Patriots who voted for me, AMERICA FIRST, […]