Safaree & Erica Mena Are Expecting Baby #2! + Erica Pops Off On Haters Who Are MADT!

Safaree Samuels and Erica Mena announced their expecting baby #2! And Erica has some words for the haters who are mad that they are expanding their family following their social media drama. Get it all inside…

Safaree Samuels and Erica Mena have had their ups and down, which the world went through with them since they aired out their dirty laundry on social media. However, it seems they have reconciled and are now awaiting the arrival of their second child together.

Yesterday, the “Love & Hip Hop” couple announced they are expanding their family on their respective social media pages.

“Safire got a new sibling,” Safaree wrote in the baby announcement caption. “New baby who dis ?? #2under2 time to get neutered now I need a chef and a nanny”

The reality star/rapper is hoping for a BOY:

“It better be a boy just finish robbing the vault,” he said on IG.

Erica also shared some maternity flicks on her social media to announce their new addition:

In another IG post, Erica talked about her marriage to Safaree not being perfect, but she’s grateful.

”Marriage – It’s not easy at all. But having a family of your very own makes up for it all. God I thank you for the protection and all the consistent blessings. I been through way to much to not be as grateful as I truly am,” she wrote.

The reality star also shared a flick of herself in a bikini to show off her growing baby bump:

”I hope y’all don’t mind getting all this belly this summer swimwear: @hotmiamistyles,” she captioned.

After making the announcement, Erica apparently was glued to her comments section because she decided to hop on IG Stories to respond to the haters who have been bashing her for reconciling with Safaree and having his 2nd child. By the way, the baby would make baby #3 for Erica as she has an older son from a previous relationship. Erica’s son and the couple’s 1-year-old daughter, Safire Majesty, will be welcoming a new sibling soon.

”Now granted there’s been mistakes made, immaturely, but a marriage is a marriage and unfortunately there’s been mishaps. When you’re in the public eye – I think me and my husband has realized things should be kept it. But outside of that, we are talking about a blessing here and you guys are really trying to be so negative and nasty about it,” she said.

She said social media consists of a lot of “nasty and disgusting souls” and she’s tired of people who are toxic call her relationship with Safaree toxic.

”Half of you guys can’t even keep a man, let alone get married, vice versa for the men,” she continued. “How dare you? If you don’t have nothing nice to say just keep it moving. We’re talking about life here. Life is short and you guys are trying to find something disgusting to say about new life? I’m really just going to take a moment to pray.”

Well, many folks aren’t willing to “keep a man” if he’s toxic and childish and verbally and emotionally abusive just to say they’re married.  So, there’s that.

Erica said she’s not a pro at marriage and she and Safaree made some mistakes, but she wants people to be happy for them.

”Be happy you ugly soul,” she said. “For somebody if you can’t be happy for yourself.”

Peep the full video below:

It appears Safaree and Erica have reunited after months of posting divorce threats on social media. Back in February, Safaree threatened to divorce Erica and said getting married was one the biggest mistakes of his life.

“I mean this from the bottom of my heart getting married was 1 of my BIGGEST mistakes and it will never happen again,” he tweeted. “I’m walking away before I End up in jail over some dumb [stuff]. Nobody is worth my freedom!!!,” he said.

Erica responded, “Since you always run to social media like a little girl I might as well join in. I absolutely agree with you on this. You are the most selfish, vain and inconsiderate person. And not just with me but your only daughter!”

She continued, “Out of RESPECT for my daughter and to honor my growth as a woman. I’m going to get back to doing what I do best. Make money and be only about my business. Entertaining social media with my issues isn’t my thing.”

Before that, Safaree told Erica he didn’t want anymore kids because she got “too big” when she was pregnant with their daughter, Safire.

During a conversation on “Love & Hip Hop Unlocked,” Safaree and Erica – who tied the knot in 2019 – joined a conversation with their coupled up castmates and the topic of having more children together came up. That’s when ish went left.

“But tell them why you don’t want another one,” Erica said to Safaree. “Cause I got too big during my pregnancy. Tell them!,” Erica said.

”I did not say that. Yo! She’s making this up,” Safaree responded.

“You mentioned my stomach afterward. You said ‘You got too big. I got too big. I don’t want to be fat again.’ That’s what you said.,” Erica continued.

Congrats to the couple, chile…. 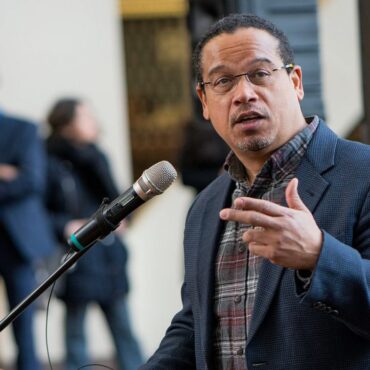 The state’s attorney general has requested the former Minneapolis police officer receive a harsher sentence for his role in the death of George Floyd. What We Know: According to a legal brief filed on Friday, Attorney General Keith Ellison asked Hennepin County Judge to hand Chauvin a harsher sentence. Ellison based his request on “five aggravating factors” that justify a longer sentence. The brief states that Floyd was a “vulnerable […]