Romany Malco Gushes Over Becoming A First-Time (Biological) Dad At 52 – ‘I’m Only Concerned With Consistently Being Present, Nurturing, Loving’

Aww! Actor Romany Malco just became a dad for the first time and he’s head over heels in love. More inside…

The COVID baby boom strikes again making one YBF actor a dad for the first time.

Think Like A Man actor Romany Malco has just entered fatherhood for the first time after welcoming his adorable son, Brave.

The 52-year-old actor, who currently stars on “A Million Little Things,” shared the exciting news on his Instagram, sharing a photo of himself cuddled up with his son – named Brave – and a lengthy caption gushing over becoming a father.

Baby Brave was born January 22nd and Romany has been head-over-heels ever since. The “Weeds” actor took a break from social media after the birth of his son, so he started off explaining to his followers why he had been M.I.A.

“Not that anyone asked but in this pic I’m holding THEE main reason for my lack of activity on social media,” he said. “With everything going on in the USA I wasn’t sure if sharing this young man via social media was the right thing to do. But then I figured there are some people who are genuinely interested in my take on the experience of becoming a biological father. So here goes.”

Becoming a father has ushered in a newfound appreciated for his partner and his mother.

“She loves it when I call her my queen. I find it more amusing to call her my baby momma,” he joked. “But the love I feel for her now is heightened, something new that I can’t yet describe.”

“My appreciation for my mother is also heightened,” he continued. “I had to call and thank her for carrying me 9 months, having me and caring for me as a newborn.”

Bravo is Romany’s first biological child, but he credited his step-children for preparing him for this experience.

“Based on my upbringing and psychological disposition, waiting to have a child later in life feels right,” he continued. “I’m already a stepdad of two. Our 11 year old and 17 year old have done an incredible job of preparing me for this moment.”

“They have taught me unconditional love and they’ve rallied for Brave in unexpected ways,” Romany added. “Now, seeing my genes expressed in this little man is fascinating to observe.”

The proud dad said he doesn’t feel any pressure to change. His job is to remain consistent and present.

”I ain’t worried about money. I feel no pressure to change. I’m only concerned with consistently being present, responsible, nurturing, receptive, patient observant, supportive, honest and loving towards my family and the world.”

“Same as always and hopefully improving with time,” he wrote, before adding a quote from the fictional character he plays in Tijuana Jackson: “Kids don’t live how you tell them to live. They live how you show them to live.” 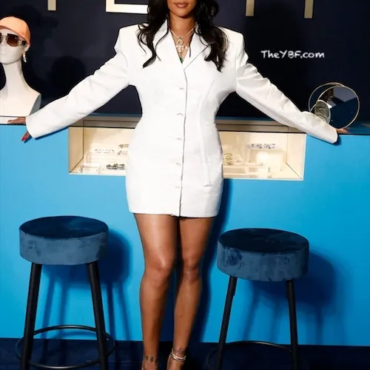 Rihanna’s groundbreaking luxury brand with LVMH Moët Hennessy Louis Vuitton has been put on pause…at least for now. But the SavagexFety lingerie division is ON FIRE.  Find out why inside… Rihanna shook up the fashion world when she unveiled her luxury brand, FEИTY. The move solidified her status as a fashion icon with the groundbreaking deal she made with LVMH Moët Hennessy Louis Vuitton, the world's largest luxury group. The not-so-great […]