Rihanna Receives Backlash for Cultural Appropriation (Again) For Posing Topless With Ganesha Pendant, A Peek Into Her $1500 Book! 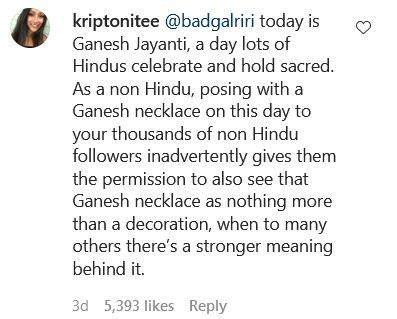 Rihanna is under fire for cultural appropriation (again). This time a topless photo of herself wearing a pendant in the image of the Hindu god Ganesha has caused controversy. More inside…

Since Rihanna has seemingly taken a break from the music scene, chick has been busy building her lingerie and beauty collections.

While her FEИTY luxury brand has been put on pause, she has been pouring all of her blood, sweat and tears into her Savage x Fenty lingerie line. Recently, the brand announced it raised $115 million in a Series B funding round led by L Catterton. This new funding brings the company’s valuation to more than $1 billion. Woot!

The Bajan beauty took to Instagram to promote her line, sharing a sexy photo of herself topless in a pair of Savage x Fenty satin boxer shorts, dripping in jewels, including a pendant in the image of the Hindu god Ganesha.

“isn’t this culturally appropriating hinduism?,” one fan wrote in her comments.

”@badgalriri today is Ganesh Jayanti, a day lots of Hindus celebrate and hold sacred. As a non Hindu, posing with a Ganesh necklace on this day to your thousands of non Hindu followers inadvertently gives them the permission to also see that Ganesh necklace as nothing more than a decoration, when to many others there’s a stronger meaning behind it,” another fan wrote.

”Are we not going to talk about the cultural appropriation?! Wearing a Ganesh necklace whilst naked seems very disrespectful to Hinduism,” one user wrote.

In 2019, fans came for Rihanna after she posed in Chinese clothing and ornaments for the cover of Harper’s Bazaar China. We found it odd being that she was paying tribute to the culture, but these days people find anything to complain about.

RiRi hasn’t responded to the controversy, but she has been sharing some fire shots of herself with her giant sized ‘Rihanna Book,’ which is a collection of photos that offer up a stunning visual autobiography of her life. Only 500 of them have been made and they’re selling for $1500 a piece. Yes, a whole stack and a half.