The ladies have jetted to South Carolina for a girls trip and things escalate quickly between “Real Housewives of Atlanta” newbies Drew Sidora and LaToya Ali. Watch it go down inside…

Last night episode of “Real Housewives of Atlanta” finally brought the drama viewers had been waiting for. Well, the beginning of the drama.

On social media, there has been a consensus that Season 13 – sans NeNe Leakes – so far has been pretty boring. And the ratings back it up. Season 13 of “RHOA” has seen the ratings drop, which some fans attest to NeNe no longer being on the show.

However, it seems things are finally heating up for some entertaining television, if reality TV drama is your guilty pleasure.

Kenya Moore – who recently announced she & her husband Marc Daly are breaking up foreal this time – planned a girls trip at a beach house in Isle of Palms near Charleston, South Carolina. Girls trips on the show have been notorious for drama and this trip isn’t any different.

First things first, Kenya charted her own private plane for the all-girls vacay. And when we say “her own” we mean she only invited one of the other ladies to fly with her. Everyone else was stuck on a hot a** bus for five hours. Porsha Williams called it “janky hot reject bus.”

On the plane, she took her new BFF/”RHOA” newbie LaToya Ali, her daughter Brooklyn and her daughter’s nanny. Once Porsha found out Kenya brought her daughter, she was pissed at the “double standard” by not offering the other ladies to bring their young children. Typical Kenya. By the way, Porsha’s ex-fiance/daughter’s father, Dennis McKinley, drove her to catch the bus with the ladies, which sparked questions about her “situationship” with him.

Before they took off for the trip, Kenya told newbie Drew Sidora about her luxe travel plans and asked her NOT to tell the other ladies. Of course, Drew spilled the tea to the other ladies, which caused friction between Kenya & Drew. And since “RHOA” newbie LaToya Ali is Kenya’s brand new bestie, she’s #TeamKenya.

“You are now on my radar, Drew,” Kenya said to the cameras. “I see you and your poodle wig!”

In a previous episode, Kenya & LaToya kiki about Drew’s wig:

Word got back to Drew about what LaToya said about her wig, so she reacted. Watch below:

A sister had to do what she had to do #rhoa #periodt pic.twitter.com/UkUO76Ac4Q

Check out a quick recap of last night’s episode below:

At the end of the episode, the preview for next week showed Drew poppin’ off on LaToya. The other castmates jumped in between them to keep them from getting physical as Drew let LaToya know she is NOT the one.

”The last b*tch that grabbed me found her head rammed into a damn gate. Don’t f*ck with me, I’m from Chicago b*tch!,” Drew told LaToya.

Drew tweeted we would see someone disrespect her on next week’s episode:

Next week you will see someone being very disrespectful towards me. #thenerves #iamfromchicago #rhoa

Peep the short clip below:

Drew Vs Latoya really about to go down next week. I’m SHOOK! #RHOA pic.twitter.com/OHKTi6Bl2s

Below is the full sneak peek at next week’s episode:

It’s about to go down. Will you be tuned in? Looks like we’re about to get to the bottom of that stripper fiasco that involved Porsha and Tanya Sam.

Drew is celebrating her husband Ralph Pittman Jr.‘s birthday early and decided to give fans a sneak peek at what’s HERS. Well alright now. 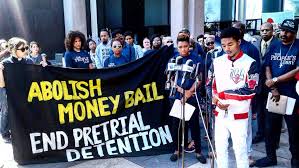 A bill that would end cash bail in Illinois was passed last Wednesday, spearheaded by the state’s Legislative Black Caucus. What We Know: The Pre-trial Fairness Act was passed last week and is currently awaiting Governor J.B. Pritzker’s signature. Pritzker has previously expressed support for the bill, which would make Illinois the first state in the country to end all cash bail. Across U.S. courtrooms, judges offer pre-trial release payments, […]