Raz B Keeps His Foot On Chris Stokes’ Neck About Alleged Sexual Abuse, Demands He Takes A Polygraph After Chris Tried To Silence Him

Raz B is keeping pressure on his former manager Chris Stokes over allegations of sexual abuse. For years, Raz B has spoken out about being molested by Chris as a kid. Now, he’s demanding Chris take a polygraph test so the truth can finally be revealed. More inside…

It appears the powers that be have been trying to silence B2K member Raz B, but he’s applying even more pressure now.

In 2007 & 2010, Demario “Raz B” Thorton accused his former manager Chris Stokes and former friend Marques Houston of molesting him as a youth. Following the public accusations, Chris released a statement denying the sexual abuse allegations.

Since then, Raz B has repeatedly shared stories about what he endured as a child in the music industry when he was a member of the hit singing group B2K.

Recently, Raz B sat down with Hollywood Unlocked’s Jason Lee for an in-depth interview about being drug & alcohol abuse, being molested as a child and to elaborate on the sexual abuse allegations made against his former manager. However, the interview got shelved by FOX Soul.

”WHY ARE PEOPLE TRYING TO SHUT DOWN RAZ B?,” Jason Lee asked on Instagram. “So I just got off the phone with @foxsoul and the interview with @razb_b2k that was scheduled to air tonight won’t be airing. In the interview Raz and I discussed why young boys and men who alleged sexual abuse aren’t taken seriously or intimidated into silence and then this happens!,” he explained.

”As a victim of sexual abuse at the hands of a man I will not be silenced nor will I allow him to be. We will be meeting to discuss when the show will air and I’m willing to do whatever it takes to elevate this important conversation! I’m not happy but it’s out of my control – FOR NOW.”

In an IG video, Jason revealed FOX Soul received a cease and desist letter from people who allegedly victimized him, claiming they were going to sue the network if they air the interview.

Here’s a clip from the interview:

Raz B also took to social media to express how frustrating it has been trying to get his story out to the masses. He also made it clear he wants smoke with Chris (in the post below).

”Check this sh*t out, I’m tired of f*ckin’ being bullied. You ain’t gotta send nobody to see me, but what we will do, is when I see you, I’m smackin’ the sh*t out yo ass,” he said.

Raz said he wants Chris Stokes to take a polygraph test to dead all of the drama:

“So I been getting a bunch of calls from my loved ones. People that support me. And they’re like, ‘Take this down. Deal with this privately.’ But I say — Yo, they’ve ruined me publicly,” he began. “Got people thinking that I’m gay — and I’m not because I was molested by a pedophile… Since y’all trying to shut me down publicly by sending out cease-and-desist letters, lets get in the room with the lawyers and let’s take a polygraph test. I’m gonna take the test and when I take the test, you can take whatever it is that you need to do. When you take it, and when you fail, you take this fade and you take that bid ’cause I’m tired of being bullied and I’m not going to be bullied no more.”

Chris Stokes seemingly hasn’t responded to Raz B, so he hopped on social media with another video demanding Chris take a polygraph test. He also called out Immature/IMx member Marques Houston, calling him a “creep” for marrying Chris’ “play daughter” Miyana (Miya) Houston, who is 18-years younger than him. She was 19 and Marques was 37 when he popped the question.

Chris Stokes has been busy posting subliminals on his IG:

“People throw dirt on your name and get mad when flowers grow from it. SMH,” he said.

O’Ryan – B2K member Omarion’s brother – recently spoke out about why he decided to defend Raz B. Chris Stokes hopped in O’Ryan’s IG comments with some emojis and O’Ryan responded by telling Chris to take the polygraph test.

Below, he explained why he did it:

In 2019, VLAD asked Omarion about Raz B’s molestation accusations against B2K’s former manager. He said he does believe “something bad happened” to Raz, however, he said he wasn’t 100% sure it was Chris who did it.

Peep his interview below:

With all of this tension festering within the group, it’s understandable why B2K had so many issues during their Millennium Tour – even outside of the drama with Omarion’s ex Apryl Jones & his bandmate Lil Fizz.

You’ll recall, just days into the tour, Raz B announced he was quitting the tour because he didn’t feel safe around Chris Stokes, who, apparently, is still attached to the group in some form. Photogs caught up with Raz after his announcement and he revealed he changed his mind and WOULD participate in the tour, which he ended up doing.

Hopefully, Raz B will be able to share his story with the masses so he can continue healing and moving forward. IF Chris Stokes did what’s being alleged, he needs to be behind bars. PERIOD. 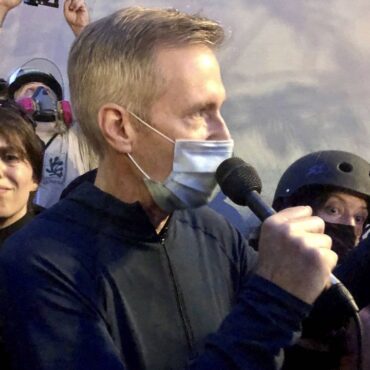 Portland Mayor Ted Wheeler pepper-sprayed a man outside of a pub Sunday night, after the man accosted him while recording on his phone. What We Know: Democrat Mayor Ted Wheeler reported to police about the incident. “I clearly informed him that he needed to back off,” before spraying him in the eyes, according to the incident report released by police. According to Wheeler, he was leaving the pub around 8 […]