Rapper Polo G Speaks Out About Miami Arrest, Reportedly Hit With Multiple Charges That Include Battery On Police

Rapper Polo G speaks out for the first time following his arrest in Miami. The rapper, his sister, his child’s mother, and several other people from his crew were thrown in jail following his album release party. Polo’s mother/manager, Stacia Mac, kept his fans up to date following the arrest.

According to reports, he was hit with five criminal charges, which include battery of a police officer. Details inside…

It’s been a crazy and hectic weekend for XXL Freshman Class of 2020 rapper Polo G.

The Chi-town rapper was arrested in Miami right after his album release party. Everything was going good at first, but things quickly took a turn by the end of the night.

During the shindig, his mother/manager Stacia Mac gifted him with a lump sum of cash to celebrate his new musical offering. Peep the clips below:

Polo g was just throwing a album release party…what lead to this? pic.twitter.com/LxDFraBsvm

By the end of the party, ish went totally left. Tons of police officers swarmed outside of the party. Polo and his crew – which included his sister Leilani, his brother (who is a minor), his child’s mother/girlfriend Crystal and more were arrested and taken to jail.

In the clips, you see Polo’s momager poppin’ off on police for arresting her children and not allowing her to speak to them, including her minor child.

Polo’s momager hopped on social media to explain what happened. She said her kids called her on FaceTime and she watched in horror as the police dragged them out of their vehicle and arrested them. She said the police arrested them because they’re “black and wealthy.”

Polo G’s mother @StaciaMac1 speaks on the rapper being arrested after his album release party in Miami.

At the time of their arrests, she said she was never informed on what they were charged with and mentioned rapper Lil Baby was also caught up in the drama. It’s unclear if he was arrested or even involved.

After Stacia bonded out her children, she took to social media to let everyone know that they were out of jail:

Polo G (real name Taurus Bartlett) was arrested Saturday morning and then released on bond from Turner Guilford Knight Correctional Center in Miami hours later. Below is a clip of him leaving jail following his arrest:

Polo was charged with battery on a police officer, threatening a public servant, using violence to resist an officer, and resisting an officer without violence and criminal mischief.

Early Saturday morning, a Miami PD patrol officer initiated a traffic stop at the intersection of South Biscayne Boulevard and S.E. 1 Street after a vehicle committed a traffic infraction.

Miami PD has initiated a review of the incident, including an all camera footage to insure adherence to departmental policy and law.

The department has also launched an investigation on several threats made against personnel and facilities by unknown individuals in response to Bartlett’s arrest.

The Miami Police Department is investigating an incident involving Bartlett and another male juvenile, but have not provided any additional information on the identity of the other male.

Apparently, the police pulled over the vehicle Polo was riding in and asked them to roll down their windows, but they refused.

According to the report, all occupants were ordered out of the vehicle so officers could conduct a pat down to make sure the group didn’t have any firearms or weapons on them.

Police said most of the males then exited the car, yelling and shouting at the officers. But officers said Bartlett became “increasingly verbally aggressive” and refused to get out of the car.

“F*ck you. What the f*ck do I have to get out of the vehicle for?” the rapper allegedly told them.

Police said Bartlett was removed from the car by officers and was taken to the ground after he resisted, tensing his arms and throwing his body from side to side.

“I will kill you. I swear I’ll use these fists to beat the sh*t out of you and knock your a** out,” Bartlett told the officer, according to the report.

After he was released, the 22-year-old rapper took to Twitter to react. He said one of the detectives told him they had been following them right after they touched down in the city.

“1 of the officers told us they was on us since we got off our jet,” he tweeted. “They plain foul in Miami & dat sh*t been like that for a minute.”

Polo’s sister Leilani also reacted to how the Miami Police Department mistreated them.

Not my proudest but behind my brothers I’ll do that shit all over again! I ain’t ashamed of shit!!!!! pic.twitter.com/0YSwO7mHKa

“Not my proudest but behind my brothers I’ll do that shit all over again! I ain’t ashamed of shit!!!!!,” she captioned a picture of her mugshot.

“We went from celebrating a successful album with my family to watching my brothers be targeted and aggressively mishandled and thrown around by police,” she continued. “Yall should’ve seen how they had damn near 30 cop cars. All our guests who came to celebrate on the ground being manhandled!!!! Them bullsh*t a** charges cuz y’all hate to see black success!!! Disgusting y’all should’ve saw how happy they was that they detained my f*cking brother!!! And the correctional/police officers laughing while listening to his music!!!”

“I don’t play about my family!!!! Never have!!! Never will!!! I’ll lay down and die about them,” she wrote. “Miami can kiss my entire ass!!! They always on bull shit…ALWAYS”

Polo G is back in Atlanta following the arrest drama:

Glad no one was hurt or killed. 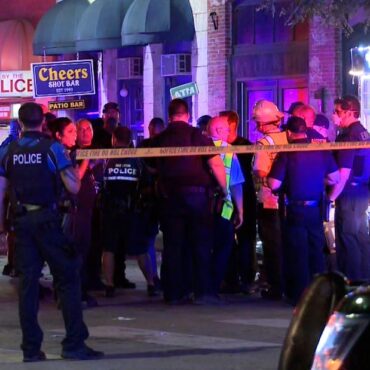 9 Mass Shootings This Weekend Brings Total to 272 This Year

From Friday afternoon to Sunday, nine mass shootings occurred in six states. This brings the total of mass shootings for 2021 to 272. What We Know: A mass shooting is defined by the Gun Violence Archive as an incident in which four or more people are shot, regardless of fatalities. Initial reporting from ABC News detailed four mass shootings in the span of six hours this weekend. Further coverage from […]