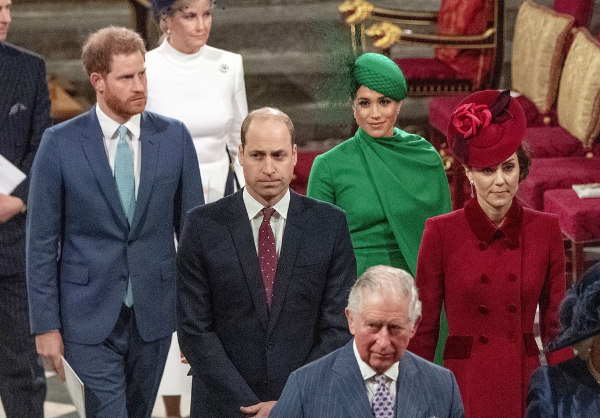 Prince William speaks out for the time since the airing of his brother Prince Harry & Meghan Markle’s interview Oprah. He says the British Royal Family is far from racist. Oh? More inside…

Oh yes, The Firm is in overdrive for a PR spin after racism allegations.

Prince William spoke out for the first time since his brother Prince Harry & sister-in-law Meghan Markle’s candid interview with Oprah. As you know, there’s speculation on which royal family member had “concerns” over “how dark” Baby Archie’s skin would be before he was born. Two royals have already been ruled out: The Queen and Prince Philip.

Many social media users have shared who they think are the culprits – one of them being Prince Harry’s father, Prince Charles.

Prince Charles – who’s next in line to be king – latest phot-op hasn’t helped persuade the public it wasn’t him. And now, Prince Williams reaction has folks giving him the side-eye as well.

“We’re very much not a racist family,” Prince William oddly responded to a reporter during a visit to a London school.

Prince William’s reaction is odd because royals don’t normally respond to reporters who ask questions off the cuff. He was walking out of the school when the reporter asked him about the interview and he responded, which doesn’t normally occur.

William was also asked if he had spoken to Prince Harry since the premiere of the interview and he said he hadn’t…”yet,” but plans to.

The fact he randomly responded to a reporter on his way out is…interesting, to say the least.  The BRF is notorioous for not repsonding to salacious questioning.

Below are a few Twitter reactions to Prince Williams response:

Us: Who asked about Archie’s skin tone?

The British royal family is a joke

prince William just confirmed that they are stupid as well
You don’t DENY racism, you ADDRESS IT pic.twitter.com/ropj69eHf0

Prince William: #RoyalFamily is “very much not a racist family.”

There’s no surprise William hasn’t spoke to Harry since the interview. During the Oprah interview, Harry said his relationship with his brother is “spaced” at the moment, but he was hopeful time would heal things between them.

Prince William’s response comes on the heels of his father’s first appearance since the bombshell interview. Prince Charles posed it up for a photo-op with Black healthcare workers and Black church members earlier this week. When a reporter asked him his thoughts about the interview, he did not respond.

Queen Elizabeth II released a formal statement via Buckingham Palace following the interview, saying the family was “saddened” and that they took the racism accusations “very seriously.”

“The whole family is saddened to learn the full extent of how challenging the last few years have been for Harry and Meghan. The issues raised, particularly that of race, are concerning,” the statement read. “While some recollections may vary, they are taken very seriously and will be addressed by the family privately. Harry, Meghan and Archie will always be much loved family members.”

We’re still not over the “recollections may vary” comment.

Are y’all side-eying Prince William & Prince Charles? Or do you think it was another member of the royal family who made those racist comments? Let’s talk about it.

These hit dogs are HOLLERING! And Sheryl Underwood is giving a masterclass in self-control when she was confronted by her friend/"The Talk" co-host Sharon Osbourne who’s defending alleged racist, Piers Morgan, after his criticism of Meghan Markle. Watch the ladies’ heated conversation inside… Major props to “The Talk” co-host Sheryl Underwood on keeping it classy after being disrespected on national television. Yesterday, the ladies on “The Talk” did a segment reacting to “The Talk” co-host Sharon Osbourne showing support for […]