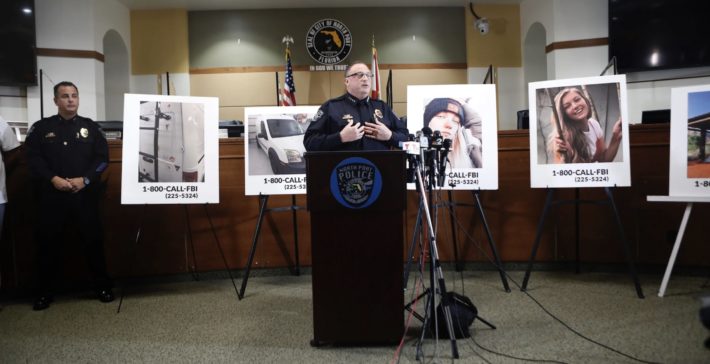 The search for the now-missing fiancé of 22-year-old Gabby Petito is focused on a Florida nature reserve, where 50 officers from five local agencies and FBI agents scoured the area Saturday.

“All of Gabby’s family want the world to know that Brian is not missing, he is hiding,” the family said in a statement to CNN on Friday. “Gabby is missing.”

It is believed that 22-year-old Petito was last seen on Aug. 30 at Grand Teton National Park in Wyoming, where she and Laundrie reportedly stopped during a road trip across several western states. Police say 23-year-old Laundrie returned to his North Port, Florida, home on Sept. 1, without his fiancée or any information on her whereabouts. Petito’s family reported the woman missing on Sept. 11, after they spent days trying to contact her.

Investigators eventually seized the van the couple was traveling in since July 2 and kicked off an extensive search. Laundrie has not publicly commented on Petito’s disappearance, but his family’s lawyer released the following statement to the Independent.

Not only has Laundrie refused to speak to investigators, his whereabouts are now unknown. North Port Police spokesman Josh Taylor announced this week that Laundrie’s family has not seen or heard from him since Tuesday. According to CNN reports Florida authorities are now searching for him in a massive nature preserve he supposedly visited earlier this week.

Laundrie has not been charged with a crime, but has been named a person of interest.

Earlier this week, the Moab City Police Department released body cam footage of officers’ interaction with the couple on Aug. 12, after receiving a report about a possible domestic violence situation. The video shows police pulling over the couple’s van in Arches National Park. Petito and Laundrie tell officers they had been arguing earlier that morning, and that Petito had slapped her partner at one point during the altercation. The couple insisted no one was severely harmed or in danger, leading officers to deem the incident a “mental-emotional break” instead of a domestic assault. WFTS reports no charges were filed.

On Friday, TikTok user Miranda Baker posted a series of videos claiming she had interacted with Laundrie around the time Petito reportedly went missing. Baker said she and her boyfriend had given Laundrie a ride on Aug. 29 as he was hitchhiking in Wymoing.

“He approached us asking us for a ride because he needed to go to Jackson and we were going to Jackson that night,” Baker said in a TikTok post. “So I said, ‘Hop in,’ and he hopped in the back of my Jeep.” During the ride, Laundrie allegedly told the couple he had been camping alone for several days, as his fiancé was back at their van working on their social media pages.

Baker said that after about 10 miles of traveling, she mentioned she and her boyfriend were headed to Jackson Hole, Wyoming, which was about 12 miles away from Jackson. At that point, Laundrie reportedly became “freaked out” and asked the couple to pull over. He told Baker and her boyfriend he was going to walk across the street and continue hitchhiking.

“He said that he had hiked for days along Snake River but looking at his backpack, it wasn’t full,” she claimed in one video. “He said all he had was a tarp to sleep on. Which, you think if you’re going camping for days on end, you’d want food and a tent, and he had none of that.”

Baker also said she had talked to police before posting her accounts.

“We have talked to her,” Taylor told the Independent about Baker. “That is all I can confirm.”

Praying the family gets answers. 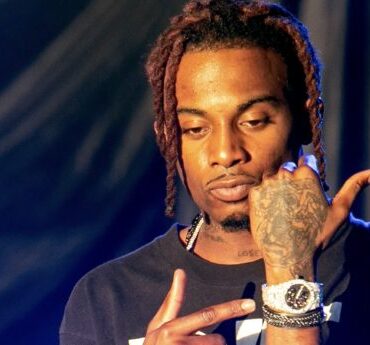 Playboi Carti Was Sued By A Jeweler Who Claims The Rapper Owes Nearly $100,000 [Photo + Video]

Playboi Carti needs to settle up a bill. via: Uproxx Playboi Carti is less than a year removed from the release of his second album, Whole Lotta Red, and there’s another en route called Narcissist. But now he’s in trouble: Carti was recently sued by famed jeweler Elliot Eliantte for an unpaid balance of $97,063.75. According to a report that TMZ shared on Friday, Eliante And Co. claim the rapper […]