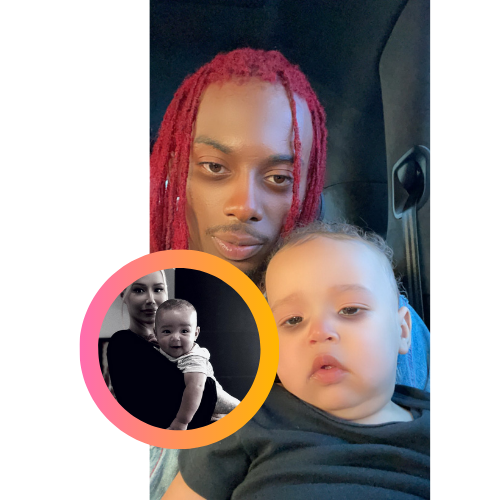 Looks like Playboi Carti straightened up his alleged deadbeat daddy behavior after Iggy Azalea dragged him for filth on Christmas Day.  We’ll see how long it lasts.  The latest inside…

There’s nothing like getting a down and dirty dragging on Jesus’ birthday to make you check yourself.  At  least for the moment.

Rapper Iggy Azalea blasted her ex and child’s father Playboi Carti about not being with their son Onyx for his first Christmas.  Instead, she says, he was on baecay with a chick he cheated on her with.

Ish got even messier.  Iggy claimed Carti missed their son’s birth because he was *checks notes* playing video games at his homeboy’s house.  And she accused him of not being a good father, despite this being his first born son. The wild cheating & deadbeat daddy accusations had the internet on fire on Christmas.  Now, Carti is seemingly responding with action.

He posted Onyx in the studio with him yesterday:

And Iggy claimed she’s giving him a chance to do right by his son.  But not by HER.  That, she says, is completely over.

We hope this isn’t a one time “let me get the baby so I can post on IG” thing for Carti.   Because we know how some parents can be….

Police responded to a 911 call after neighbors reported a fire started early Saturday morning. What We Know: According to Fox News, neighbors reported a fire at a Long Island home on Mastic Boulevard W. and Windsor Place at around 2:30 a.m. on Saturday, December 26th. When officers arrived, they discovered a human corpse burning on the property. Shirley, Suffolk County Police arrested 20-year-old Peter Pendzinski at the scene. According to ABC News, Pendzinski is believed to be a resident […]