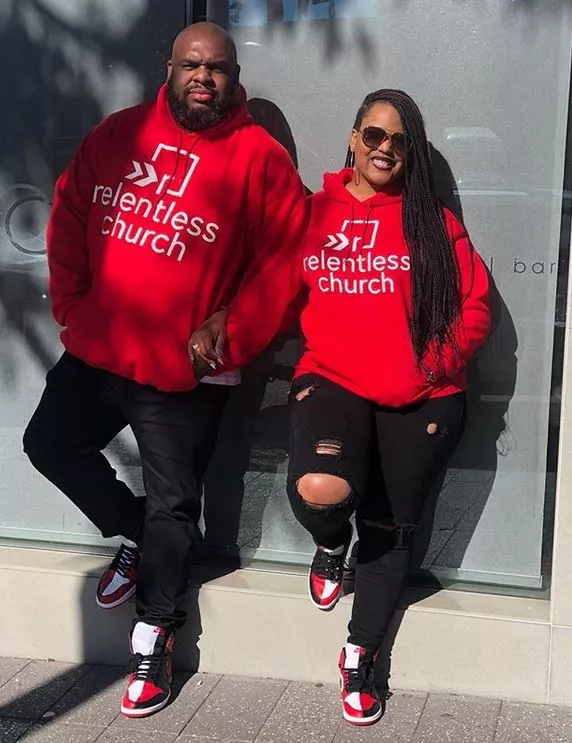 Pastor John Gray had folks ringing the alarm over his elaborate 10th year wedding anniversary post he put up dedicated to his wife Aventer Gray. Find out what had folks up in arms inside…

Pastor John Gray and his wife Aventer Gray recently celebrated their 10th wedding anniversary and he made sure to acknowledge the milestone to the world. While a husband celebrating his wife on their anniversary isn’t a huge deal, folks have plenty to say about Pastor Gray and his over-the-topness.

The 47-year-old religious leader gushed over his wife and their marriage, praising her for being his rock, loving him unconditionally, and riding for him even when he’s not doing right by her.

“And then there were some painful days. Choices I wish I had made differently. Places of unresolved pain showing up in the worst possible moments,” he said. “And then the reminder…. FOR BETTER OR WORSE, FOR RICHER, FOR POORER, IN SICKNESS AND IN HEALTH, FOR AS LONGGGGGG AS WE BOTH SHALL LIVE. I am God proud of the choice I made to marry this woman,” Pastor Gray wrote. “And I am grateful God has blessed me with 10 years of marriage. And I look forward to applying the lessons of the past ten years to ensure that the next forty are filled with all the love, honor, cherishing, and legacy building that @iamaventergray’s heart desires.”

”All you ever wanted to do is love me. But it’s almost impossible to love someone who hates themselves. To ten years. To your yes. To my choice. To this love. To forever. I do. Again. And again. And again. Happy anniversary baby. Let’s keep changing the world. #WeAre10 #GodDidIt #GraysForever,” he wrote.

Naturally, fans who have followed their relationship have things to say about his declaration of love for his wife. Most point out the fact that he has been caught cheating on her several times (at least TWICE in 2020 and several times before) and yet, he continues to do it.

“at what point does this guy just stop and say ‘I am not the man I portray to be,'” an IG user wrote.

“And until you can be the man you need to be to your wife you should be single, not disrespect yourself or your marriage. You vowed to HONOR…,” another IG user responded.

“Giiiiirrrlll I wish my cheating ass husband would post me on our anniversary. leave me out of IT!,” one user wrote. Oop!

Each time he promises to do better and be better only to get put on blast yet again by another woman. It’s embarrassing at this point. If being a married woman means forgiving a man who constantly cheats on you and publicly embarrasses you, yeah, no – we’re good. No one should have to deal with this, especially since this isn’t the first or second time allegations like these have come up.

Aventer’s birthday is a day after their wedding anniversary. No surprise he put up another long post dedicated to his wife and mother of his two children:

No Lamborghini this time though.

Vanessa Bryant Says Her Mom’s ‘Frivolous & Embarrassing’ Lawsuit Is Trying To Extort Her For Money!

Vanessa Bryant's mom - Sofía Urbieta Laine - is WILDIN'! She’s suing her widowed daughter for “unpaid” wages she claims she’s owed for work as a “nanny and personal assistant” for the Bryant Family. With family like this, who needs enemies? More inside… It’s bad enough Vanessa Bryant is still grieving the death of her husband/NBA icon Kobe Bryant and their 13-year-old daughter Gianna Bryant. Now, she has to deal with her own MOTHER suing her - all in the […]