The Marathon Continues! Nipsey Hussle’s estate announced they will be streaming “The Marathon” live album experience, which will give fans a behind-the-scenes look at how the late rapper created his 2010 mixtape. Also, we have an update on the murder trial. Everything inside…

The estate of late rapper Nipsey Hussle announced an upcoming live experience that’ll take fans on a journey with the west coast rapper.

December 21st marked the 10-year anniversary of Nipsey’s debut mixtape, The Marathon. The mixtape marked the beginning of Nispey’s musical catalog as it was the first project through his own label, All Money In No Money Out. The debut mixtape kicked off a “marathon” of success for the rapper, which included The Marathon Continues mixtape, and his Crenshaw mixtape, which he famously sold copies of for $100. Before his death, Nipsey released his debut album, Victory Lap, and won a Grammy Award for the musical offering.

Here’s another sneak peek below:

Previously, Nipsey’s estate announced the live experience was in the works:

“Today marks 10 years since the release of #TheMarathon. A project our team holds near and dear to our hearts for many reasons,” the brand said about the upcoming experience. “It represents the story of Nipsey’s resilience and unwavering faith in his mission, and the authenticity and honesty in his message. It also was the first seed planted in the Marathon brand that gave fruit to many other branches that Nipsey architected, as only he could do.”

“In commemoration of this anniversary we’re proud to announce our collaborative effort with Okidoki to bring to life an interactive live visual album experience coming in 2021,” the post continued. “The experience will give viewers [an] intimate look at the era that helped shape this masterpiece. The people, the places, the stories and more. Stay tuned, official drop date coming soon!”

Through the eyes of his Benz, Nipsey travels to key L.A. landmarks including his Wilshire Blvd. studio, the now-defunct House of Blues where he performed as a burgeoning artist, Hotel Roosevelt, and the Slauson Tees store that he opened in 2008. At each stop of the experience, Nip quotes and new interviews with family members and collaborators are mixed in to provide a refreshing perspective.

“[THE MARATHON] forever reminds me of Nipsey’s genius, vision, and his intuitive purpose to inspire others above all at all costs,” Blacc Sam told Billboard. “Nipsey’s determination, dedication, and integrity were displayed in every day of his life. His marathon mentality will forever inspire.”

Check out the trailer below:

Looks like it’s going to be LIT with the interactive components. We’ll be tuned in.

Blacc Sam – Nipsey’s brother who has been managing all of Nipsey’s business affairs – hinted at some new music possibly coming down the pipeline.

If you haven’t heard, Ava DuVernay has reportedly been set to direct and co-produce a feature-length documentary about the Grammy Award winning rapper, following a bidding war reportedly won by Netflix. Apple and Amazon were reportedly involved in the bidding war.

“A new Nipsey Hussle album would only be presented in the form of a soundtrack to his life’s documentary, [which] the family is working on,” Blacc Sam revealed.

It appears Nipsey fans will get new music once his documentary is complete.

On the legal front…

Eric Holder – Nipsey’s alleged killer – appeared in court last month where he agreed to have his murder case pushed back (again) to February 24th.

The judge who was presiding over the case – Rodney Perry – retired recently. Holder agreed to delay the trial to unfold in front of a different judge in a new department.

“His attorney discussed it with him, and [Holder] agreed to put it over,” a courtroom source told The Daily News. “The next hearing will be a 0 of 30, meaning the earliest the trial could happen is 30 days from that date.”

The music world was stunned after news broke that Nipsey had been fatally shot six times by both a semiautomatic handgun and a revolver outside of his clothing store, The Marathon Clothing, in L.A. on March 31, 2019. Holder was indicted on one count of murder, two counts of attempted murder related to other victims and weapons charges. He pleaded not guilty to the charges. If he’s convicted he faces up to life in prison. 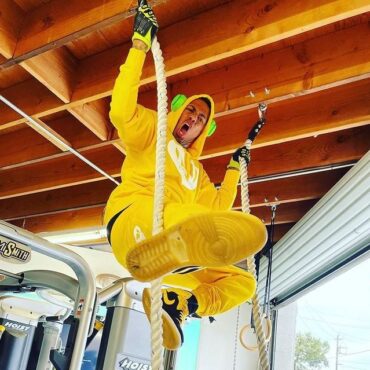 Nick Cannon has tested positive for COVID-19, which means he can’t host the first few episodes of “The Masked Singer” show’s fifth season. Producers have tapped Niecy Nash to fill in. Deets on Nick’s condition, plus what he’s cooking up with comedienne Tiffany Haddish inside… COVID-19 is still very real and still infecting Americans at an alarming rate as vaccine doses are being distributed. Nick Cannon has reportedly tested positive […]