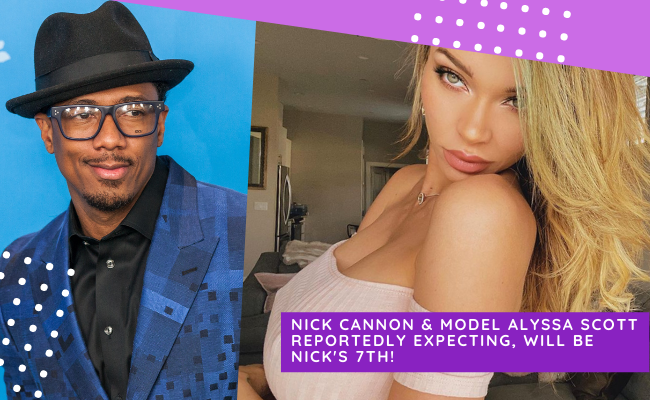 Well well well.  What do we have here?  Another BABY CANNON on the way?  Former “Wild n Out” model Alyssa Scott just hinted that she’s pregnant with Nick Cannon‘s seventh child.  All while another woman is currently pregnant with his twin boys. Details inside.

We need a chart.

If you thought Nick Cannon would have slowed ish down a bit after impregnating two women at the same time while simultaneously bouncing from one girlfriend to another (neither of which were the women he impregnated), think again.  Because it looks like he has baby #7 on the way with a new woman.

A former model from Nick’s show “Wild N Out”, Alyssa Scott, posted maternity pics a few weeks ago telling her fans she has a baby boy on the way.  She is already a mom to a toddler little girl.

Her most recent maternity pic she posted yesterday is the one that had folks doing a double take.  Not just because it was a fully nude pic, but because she captioned the pic with what appears to be the baby’s name: Zen S. Cannon.

Of course, folks had questions seeing that the baby has Nick’s last name and she does have a connection to Nick through her former job.  And, let’s face it, she’s not too far from what is seemingly his type.

One commenter flat out asked her if Nick Cannon is the father.  Her response: A heart-faced smiley emoji.  Mmhmm…

Nick Cannon’s fan site even congratulated her in the comments.

Alyssa also captioned one maternity pic “Blues”, which is coincidentally (or not so coincidentally) part of the name of Nick’s new song “Ghetto Blues”.

Just last month, Nick celebrated the impending arrival of his twin boys with DJ Abby De La Rosa.  Those babies are due in July.

Two months ago, Brittany Bell welcomed their newest child together, a daughter named Powerful Cannon.  The twosome already have an older son together, Golden Cannon.

Nick has also been in a relationship with model and former video vixen Lanisha Cole throughout both of those pregnancies and even currently, as far as we know.  Lanisha has yet to speak on this new alleged pregnancy news, bit she made sure to let folks know she’s by on a beach somewhere.

He was also dating model Jessica White when Brittany announced her pregnancy.  They broke up, and he started dating Lanisha.

Nick has two older twins with ex-wife Mariah Carey, as we all know, Monroe and Moroccan.  So, if Alyssa is indeed his 4th baby’s mother, their child would make his 7th.

Nick has yet to confirm anything either, but he never does until he pops up with a push gift at the baby shower. Or with matching Valentine’s gifts and celebrations for all the women in his life.

Congrats to the couple, if true. 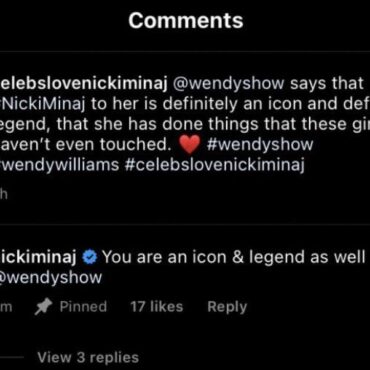 It appears Nicki Minaj and Wendy Williams have squashed their ongoing “beef” and we’ve got receipts. Check it out inside… It’s no secret Wendy Williams isn’t (or wasn't) a fan of Nicki Minaj. When news hit that Nicki Minaj married her childhood sweetheart Kenneth Petty (an ex-con with a long rap sheet), daytime talk show host Wendy Williams didn’t mince her words criticizing her situation and that launched a shady […]